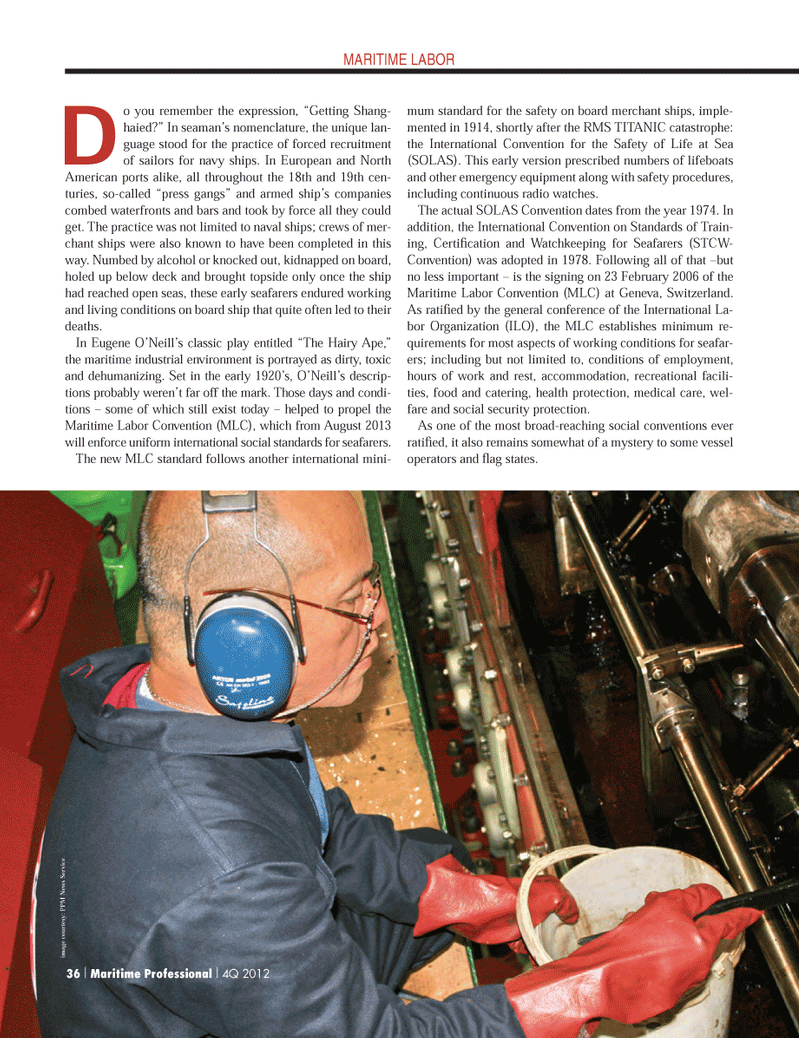 MARITIME LABORDo you remember the expression, ?Getting Shang- haied?? In seaman?s nomenclature, the unique lan- guage stood for the practice of forced recruitment of sailors for navy ships. In European and North American ports alike, all throughout the 18th and 19th cen- turies, so-called ?press gangs? and armed ship?s companies combed waterfronts and bars and took by force all they could get. The practice was not limited to naval ships; crews of mer- chant ships were also known to have been completed in this way. Numbed by alcohol or knocked out, kidnapped on board, holed up below deck and brought topside only once the ship had reached open seas, these early seafarers endured working and living conditions on board ship that quite often led to their deaths.In Eugene O?Neill?s classic play entitled ?The Hairy Ape,? the maritime industrial environment is portrayed as dirty, toxic and dehumanizing. Set in the early 1920?s, O?Neill?s descrip- tions probably weren?t far off the mark. Those days and condi- tions ? some of which still exist today ? helped to propel the Maritime Labor Convention (MLC), which from August 2013 will enforce uniform international social standards for seafarers. The new MLC standard follows another international mini- mum standard for the safety on board merchant ships, imple-mented in 1914, shortly after the RMS TITANIC catastrophe: the International Convention for the Safety of Life at Sea (SOLAS). This early version prescribed numbers of lifeboats and other emergency equipment along with safety procedures, including continuous radio watches. The actual SOLAS Convention dates from the year 1974. In addition, the International Convention on Standards of Train- ing, Certi cation and Watchkeeping for Seafarers (STCW- Convention) was adopted in 1978. Following all of that ?but no less important ? is the signing on 23 February 2006 of the Maritime Labor Convention (MLC) at Geneva, Switzerland. As rati ed by the general conference of the International La- bor Organization (ILO), the MLC establishes minimum re- quirements for most aspects of working conditions for seafar- ers; including but not limited to, conditions of employment, hours of work and rest, accommodation, recreational facili- ties, food and catering, health protection, medical care, wel-fare and social security protection. As one of the most broad-reaching social conventions ever rati ed, it also remains somewhat of a mystery to some vessel operators and  ag states. image courtesy: PPM News Service 36 I Maritime Professional I 4Q 2012MP #4 34-49.indd 36MP #4 34-49.indd 3611/12/2012 10:42:21 AM11/12/2012 10:42:21 AM