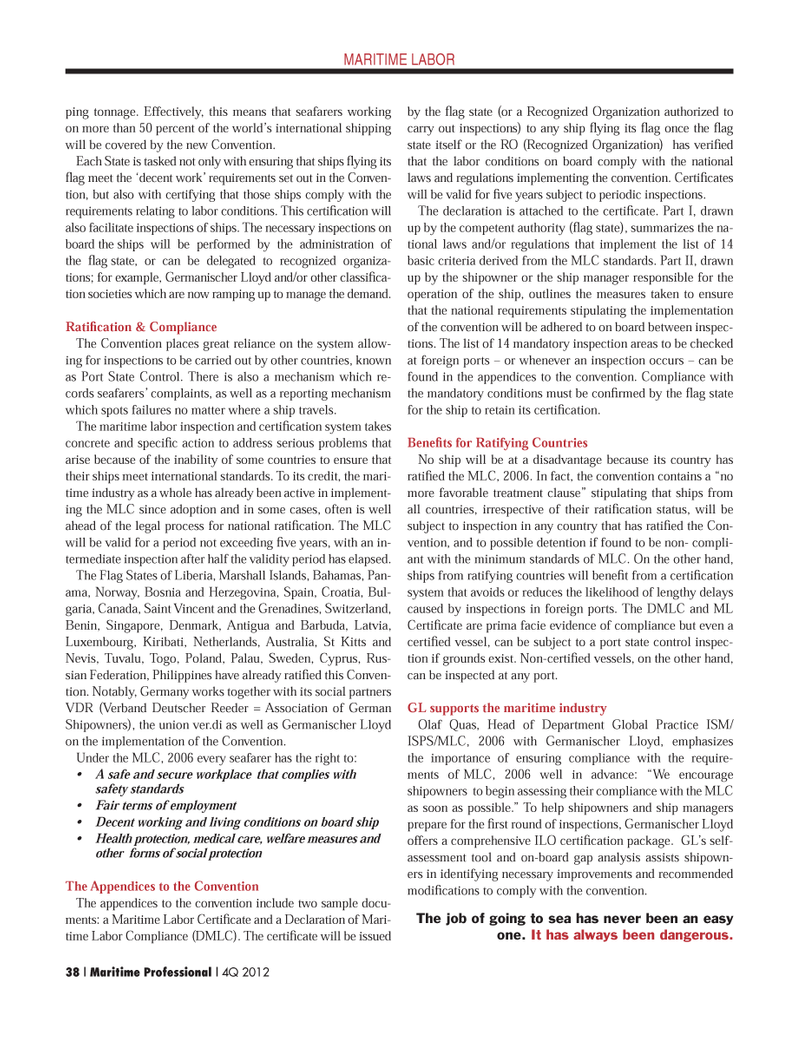 ping tonnage. Effectively, this means that seafarers working on more than 50 percent of the world?s international shipping will be covered by the new Convention. Each State is tasked not only with ensuring that ships  ying its  ag meet the ?decent work? requirements set out in the Conven- tion, but also with certifying that those ships comply with the requirements relating to labor conditions. This certi cation will also facilitate inspections of ships. The necessary inspections on board the ships will be performed by the administration of the  ag state, or can be delegated to recognized organiza- tions; for example, Germanischer Lloyd and/or other classi ca-tion societies which are now ramping up to manage the demand. RatiÞ cation & Compliance The Convention places great reliance on the system allow- ing for inspections to be carried out by other countries, known as Port State Control. There is also a mechanism which re- cords seafarers? complaints, as well as a reporting mechanism which spots failures no matter where a ship travels. The maritime labor inspection and certi cation system takes concrete and speci c action to address serious problems that arise because of the inability of some countries to ensure that their ships meet international standards. To its credit, the mari- time industry as a whole has already been active in implement- ing the MLC since adoption and in some cases, often is well ahead of the legal process for national rati cation. The MLC will be valid for a period not exceeding  ve years, with an in- termediate inspection after half the validity period has elapsed. The Flag States of Liberia, Marshall Islands, Bahamas, Pan- ama, Norway, Bosnia and Herzegovina, Spain, Croatia, Bul- garia, Canada, Saint Vincent and the Grenadines, Switzerland, Benin, Singapore, Denmark, Antigua and Barbuda, Latvia, Luxembourg, Kiribati, Netherlands, Australia, St Kitts and Nevis, Tuvalu, Togo, Poland, Palau, Sweden, Cyprus, Rus- sian Federation, Philippines have already rati ed this Conven- tion. Notably, Germany works together with its social partners VDR (Verband Deutscher Reeder = Association of German Shipowners), the union ver.di as well as Germanischer Lloyd on the implementation of the Convention. Under the MLC, 2006 every seafarer has the right to:  A safe and secure workplace that complies with safety standards  Fair terms of employment  Decent working and living conditions on board ship  Health protection, medical care, welfare measures and other forms of social protection The Appendices to the Convention The appendices to the convention include two sample docu- ments: a Maritime Labor Certi cate and a Declaration of Mari-time Labor Compliance (DMLC). The certi cate will be issued by the  ag state (or a Recognized Organization authorized to carry out inspections) to any ship  ying its  ag once the  ag state itself or the RO (Recognized Organization) has veri ed that the labor conditions on board comply with the national laws and regulations implementing the convention. Certi cates will be valid for  ve years subject to periodic inspections. The declaration is attached to the certi cate. Part I, drawn up by the competent authority ( ag state), summarizes the na- tional laws and/or regulations that implement the list of 14 basic criteria derived from the MLC standards. Part II, drawn up by the shipowner or the ship manager responsible for the operation of the ship, outlines the measures taken to ensure that the national requirements stipulating the implementation of the convention will be adhered to on board between inspec- tions. The list of 14 mandatory inspection areas to be checked at foreign ports ? or whenever an inspection occurs ? can be found in the appendices to the convention. Compliance with the mandatory conditions must be con rmed by the  ag state for the ship to retain its certi cation. BeneÞ ts for Ratifying Countries No ship will be at a disadvantage because its country has rati ed the MLC, 2006. In fact, the convention contains a ?no more favorable treatment clause? stipulating that ships from all countries, irrespective of their rati cation status, will be subject to inspection in any country that has rati ed the Con- vention, and to possible detention if found to be non- compli- ant with the minimum standards of MLC. On the other hand, ships from ratifying countries will bene t from a certi cation system that avoids or reduces the likelihood of lengthy delays caused by inspections in foreign ports. The DMLC and ML Certi cate are prima facie evidence of compliance but even a certi ed vessel, can be subject to a port state control inspec- tion if grounds exist. Non-certi ed vessels, on the other hand, can be inspected at any port. GL supports the maritime industry Olaf Quas, Head of Department Global Practice ISM/ISPS/MLC, 2006 with Germanischer Lloyd, emphasizes the importance of ensuring compliance with the require-ments of MLC, 2006 well in advance: ?We encourage shipowners to begin assessing their compliance with the MLC as soon as possible.? To help shipowners and ship managers prepare for the rst round of inspections, Germanischer Lloyd offers a comprehensive ILO certication package. GL?s self- assessment tool and on-board gap analysis assists shipown- ers in identifying necessary improvements and recommended modications to comply with the convention. The job of going to sea has never been an easy one. It has always been dangerous. MARITIME LABOR38 | Maritime Professional | 4Q 2012MP #4 34-49.indd 38MP #4 34-49.indd 3811/12/2012 9:43:39 AM11/12/2012 9:43:39 AM