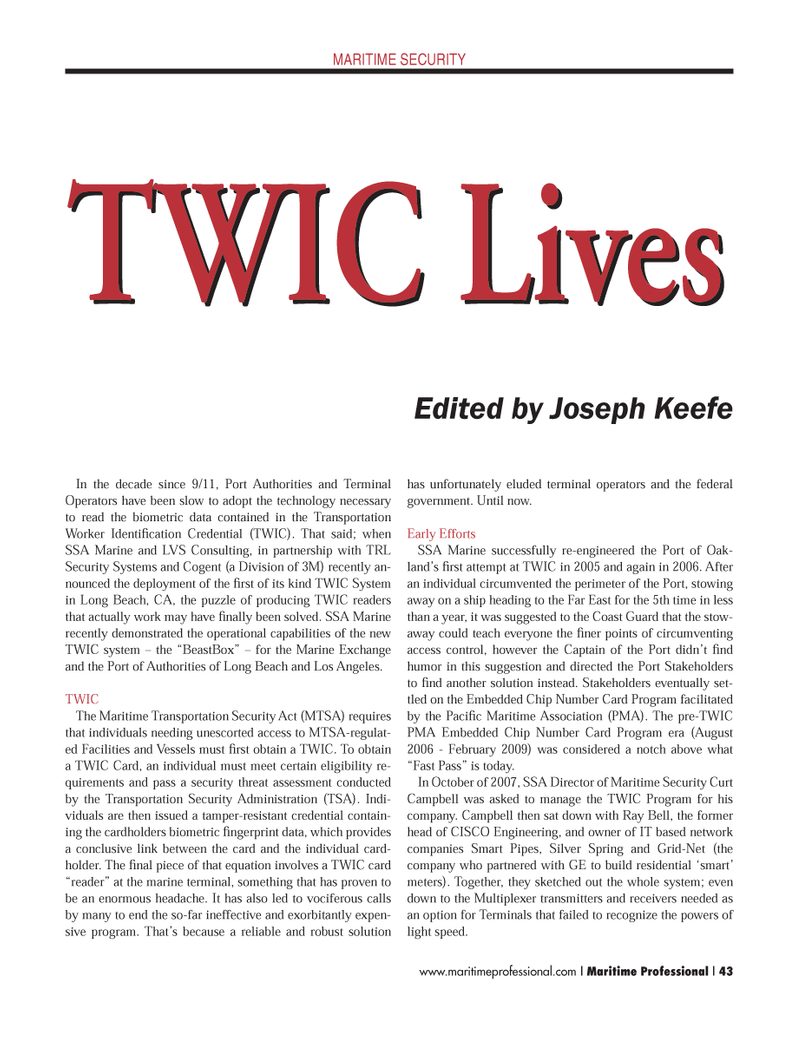 In the decade since 9/11, Port Authorities and Terminal Operators have been slow to adopt the technology necessary to read the biometric data contained in the Transportation Worker IdentiÞ cation Credential (TWIC). That said; when SSA Marine and LVS Consulting, in partnership with TRL Security Systems and Cogent (a Division of 3M) recently an- nounced the deployment of the Þ rst of its kind TWIC System in Long Beach, CA, the puzzle of producing TWIC readers that actually work may have Þ nally been solved. SSA Marine recently demonstrated the operational capabilities of the new TWIC system Ð the ÒBeastBoxÓ Ð for the Marine Exchange and the Port of Authorities of Long Beach and Los Angeles. TWICThe Maritime Transportation Security Act (MTSA) requires that individuals needing unescorted access to MTSA-regulat- ed Facilities and Vessels must Þ rst obtain a TWIC. To obtain a TWIC Card, an individual must meet certain eligibility re- quirements and pass a security threat assessment conducted by the Transportation Security Administration (TSA). Indi- viduals are then issued a tamper-resistant credential contain- ing the cardholders biometric Þ ngerprint data, which provides a conclusive link between the card and the individual card- holder. The Þ nal piece of that equation involves a TWIC card ÒreaderÓ at the marine terminal, something that has proven to be an enormous headache. It has also led to vociferous calls by many to end the so-far ineffective and exorbitantly expen- sive program. ThatÕs because a reliable and robust solution has unfortunately eluded terminal operators and the federal government. Until now. Early Efforts SSA Marine successfully re-engineered the Port of Oak-landÕs Þ rst attempt at TWIC in 2005 and again in 2006. After an individual circumvented the perimeter of the Port, stowing away on a ship heading to the Far East for the 5th time in less than a year, it was suggested to the Coast Guard that the stow- away could teach everyone the Þ ner points of circumventing access control, however the Captain of the Port didnÕt Þ nd humor in this suggestion and directed the Port Stakeholders to Þ nd another solution instead. Stakeholders eventually set- tled on the Embedded Chip Number Card Program facilitated by the PaciÞ c Maritime Association (PMA). The pre-TWIC PMA Embedded Chip Number Card Program era (August 2006 - February 2009) was considered a notch above what ÒFast PassÓ is today. In October of 2007, SSA Director of Maritime Security Curt Campbell was asked to manage the TWIC Program for his company. Campbell then sat down with Ray Bell, the former head of CISCO Engineering, and owner of IT based network companies Smart Pipes, Silver Spring and Grid-Net (the company who partnered with GE to build residential ÔsmartÕ meters). Together, they sketched out the whole system; even down to the Multiplexer transmitters and receivers needed as an option for Terminals that failed to recognize the powers of light speed. www.maritimeprofessional.com | Maritime Professional | 43MARITIME SECURITYTWIC Lives TWIC Lives Edited by Joseph Keefe MP #4 34-49.indd 43MP #4 34-49.indd 4311/12/2012 9:46:42 AM11/12/2012 9:46:42 AM