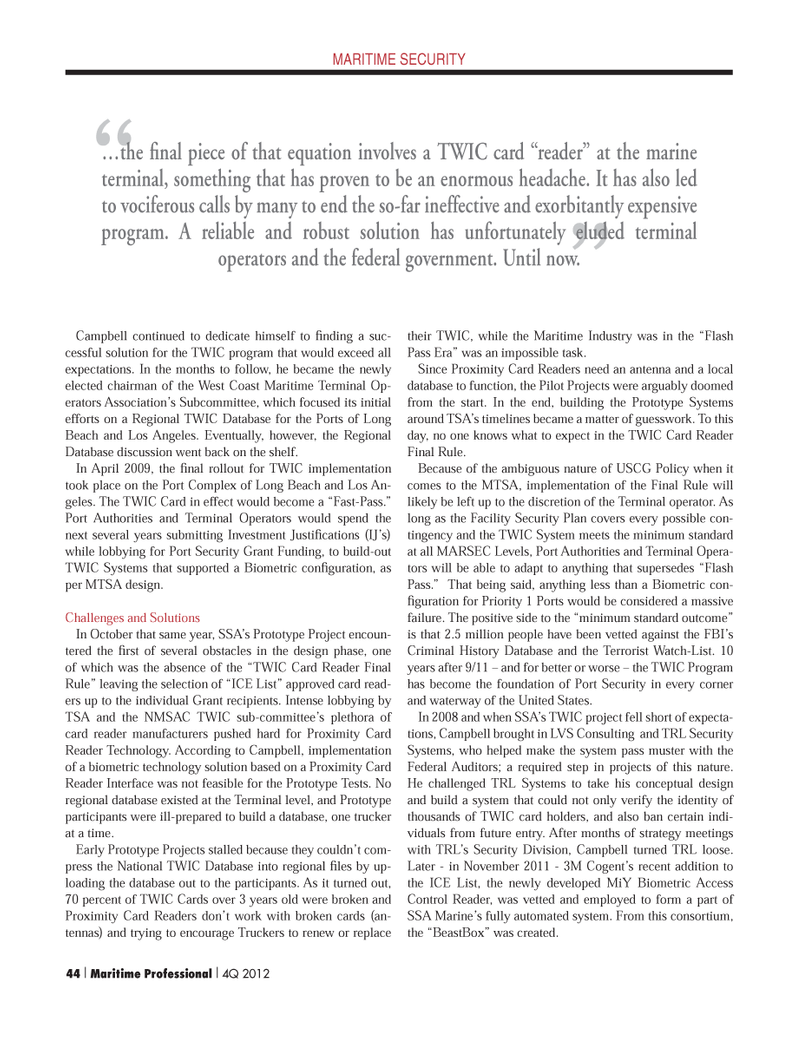 MARITIME SECURITY???the  nal piece of that equation involves a TWIC card ?reader? at the marine terminal, something that has proven to be an enormous headache. It has also led to vociferous calls by many to end the so-far ineffective and exorbitantly expensive program. A reliable and robust solution has unfortunately eluded terminal operators and the federal government. Until now. Campbell continued to dedicate himself to Þ nding a suc- cessful solution for the TWIC program that would exceed all expectations. In the months to follow, he became the newly elected chairman of the West Coast Maritime Terminal Op- erators AssociationÕs Subcommittee, which focused its initial efforts on a Regional TWIC Database for the Ports of Long Beach and Los Angeles. Eventually, however, the Regional Database discussion went back on the shelf.In April 2009, the Þ nal rollout for TWIC implementation took place on the Port Complex of Long Beach and Los An- geles. The TWIC Card in effect would become a ÒFast-Pass.Ó Port Authorities and Terminal Operators would spend the next several years submitting Investment JustiÞ cations (IJÕs) while lobbying for Port Security Grant Funding, to build-out TWIC Systems that supported a Biometric conÞ guration, as per MTSA design. Challenges and SolutionsIn October that same year, SSAÕs Prototype Project encoun- tered the Þ rst of several obstacles in the design phase, one of which was the absence of the ÒTWIC Card Reader Final RuleÓ leaving the selection of ÒICE ListÓ approved card read- ers up to the individual Grant recipients. Intense lobbying by TSA and the NMSAC TWIC sub-committeeÕs plethora of card reader manufacturers pushed hard for Proximity Card Reader Technology. According to Campbell, implementation of a biometric technology solution based on a Proximity Card Reader Interface was not feasible for the Prototype Tests. No regional database existed at the Terminal level, and Prototype participants were ill-prepared to build a database, one trucker at a time.Early Prototype Projects stalled because they couldnÕt com- press the National TWIC Database into regional Þ les by up- loading the database out to the participants. As it turned out, 70 percent of TWIC Cards over 3 years old were broken and Proximity Card Readers donÕt work with broken cards (an- tennas) and trying to encourage Truckers to renew or replace their TWIC, while the Maritime Industry was in the ÒFlash Pass EraÓ was an impossible task. Since Proximity Card Readers need an antenna and a local database to function, the Pilot Projects were arguably doomed from the start. In the end, building the Prototype Systems around TSAÕs timelines became a matter of guesswork. To this day, no one knows what to expect in the TWIC Card Reader Final Rule.Because of the ambiguous nature of USCG Policy when it comes to the MTSA, implementation of the Final Rule will likely be left up to the discretion of the Terminal operator. As long as the Facility Security Plan covers every possible con- tingency and the TWIC System meets the minimum standard at all MARSEC Levels, Port Authorities and Terminal Opera- tors will be able to adapt to anything that supersedes ÒFlash Pass.Ó That being said, anything less than a Biometric con- Þ guration for Priority 1 Ports would be considered a massive failure. The positive side to the Òminimum standard outcomeÓ is that 2.5 million people have been vetted against the FBIÕs Criminal History Database and the Terrorist Watch-List. 10 years after 9/11 Ð and for better or worse Ð the TWIC Program has become the foundation of Port Security in every corner and waterway of the United States. In 2008 and when SSAÕs TWIC project fell short of expecta- tions, Campbell brought in LVS Consulting and TRL Security Systems, who helped make the system pass muster with the Federal Auditors; a required step in projects of this nature. He challenged TRL Systems to take his conceptual design and build a system that could not only verify the identity of thousands of TWIC card holders, and also ban certain indi- viduals from future entry. After months of strategy meetings with TRLÕs Security Division, Campbell turned TRL loose. Later - in November 2011 - 3M CogentÕs recent addition to the ICE List, the newly developed MiY Biometric Access Control Reader, was vetted and employed to form a part of SSA MarineÕs fully automated system. From this consortium, the ÒBeastBoxÓ was created. 44 I Maritime Professional I 4Q 2012MP #4 34-49.indd 44MP #4 34-49.indd 4411/12/2012 9:47:05 AM11/12/2012 9:47:05 AM