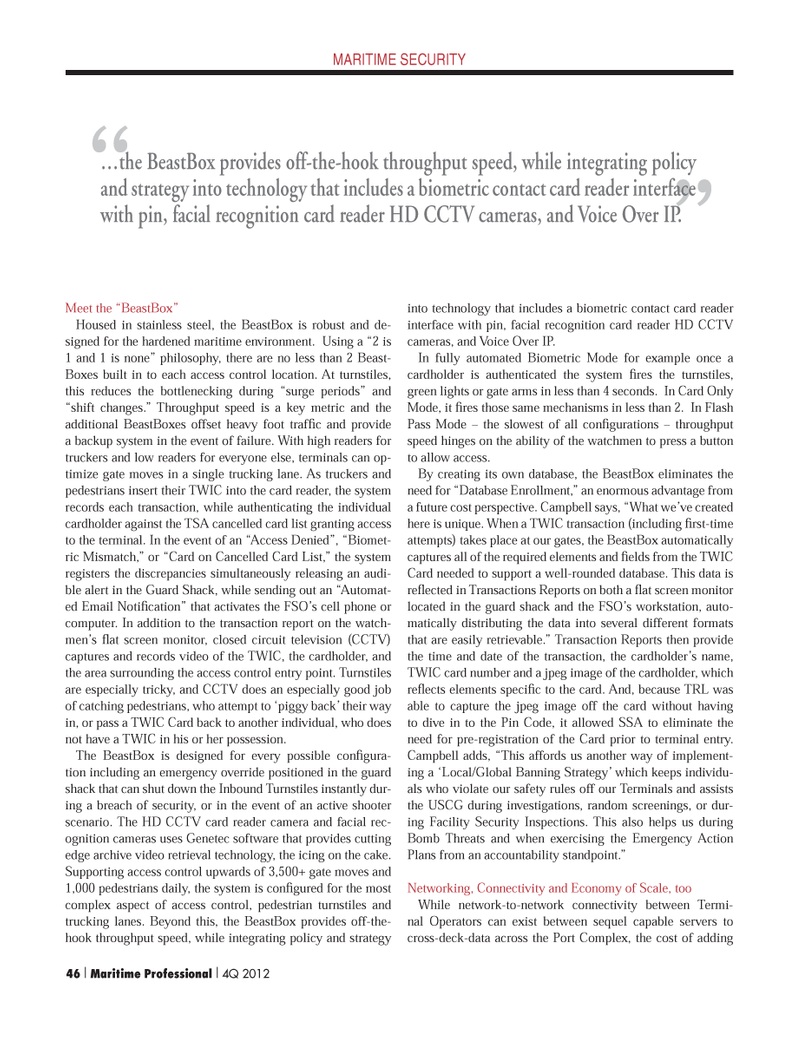 MARITIME SECURITYMeet the ?BeastBox?Housed in stainless steel, the BeastBox is robust and de- signed for the hardened maritime environment. Using a ?2 is 1 and 1 is none? philosophy, there are no less than 2 Beast- Boxes built in to each access control location. At turnstiles, this reduces the bottlenecking during ?surge periods? and ?shift changes.? Throughput speed is a key metric and the additional BeastBoxes offset heavy foot traf c and provide a backup system in the event of failure. With high readers for truckers and low readers for everyone else, terminals can op- timize gate moves in a single trucking lane. As truckers and pedestrians insert their TWIC into the card reader, the system records each transaction, while authenticating the individual cardholder against the TSA cancelled card list granting access to the terminal. In the event of an ?Access Denied?, ?Biomet- ric Mismatch,? or ?Card on Cancelled Card List,? the system registers the discrepancies simultaneously releasing an audi- ble alert in the Guard Shack, while sending out an ?Automat- ed Email Noti cation? that activates the FSO?s cell phone or computer. In addition to the transaction report on the watch- men?s  at screen monitor, closed circuit television (CCTV) captures and records video of the TWIC, the cardholder, and the area surrounding the access control entry point. Turnstiles are especially tricky, and CCTV does an especially good job of catching pedestrians, who attempt to ?piggy back? their way in, or pass a TWIC Card back to another individual, who does not have a TWIC in his or her possession. The BeastBox is designed for every possible con gura-tion including an emergency override positioned in the guard shack that can shut down the Inbound Turnstiles instantly dur- ing a breach of security, or in the event of an active shooter scenario. The HD CCTV card reader camera and facial rec- ognition cameras uses Genetec software that provides cutting edge archive video retrieval technology, the icing on the cake. Supporting access control upwards of 3,500+ gate moves and 1,000 pedestrians daily, the system is con gured for the most complex aspect of access control, pedestrian turnstiles and trucking lanes. Beyond this, the BeastBox provides off-the- hook throughput speed, while integrating policy and strategy into technology that includes a biometric contact card reader interface with pin, facial recognition card reader HD CCTV cameras, and Voice Over IP. In fully automated Biometric Mode for example once a cardholder is authenticated the system  res the turnstiles, green lights or gate arms in less than 4 seconds. In Card Only Mode, it  res those same mechanisms in less than 2. In Flash Pass Mode ? the slowest of all con gurations ? throughput speed hinges on the ability of the watchmen to press a button to allow access. By creating its own database, the BeastBox eliminates the need for ?Database Enrollment,? an enormous advantage from a future cost perspective. Campbell says, ?What we?ve created here is unique. When a TWIC transaction (including  rst-time attempts) takes place at our gates, the BeastBox automatically captures all of the required elements and  elds from the TWIC Card needed to support a well-rounded database. This data is re ected in Transactions Reports on both a  at screen monitor located in the guard shack and the FSO?s workstation, auto- matically distributing the data into several different formats that are easily retrievable.? Transaction Reports then provide the time and date of the transaction, the cardholder?s name, TWIC card number and a jpeg image of the cardholder, which re ects elements speci c to the card. And, because TRL was able to capture the jpeg image off the card without having to dive in to the Pin Code, it allowed SSA to eliminate the need for pre-registration of the Card prior to terminal entry. Campbell adds, ?This affords us another way of implement- ing a ?Local/Global Banning Strategy? which keeps individu- als who violate our safety rules off our Terminals and assists the USCG during investigations, random screenings, or dur- ing Facility Security Inspections. This also helps us during Bomb Threats and when exercising the Emergency Action Plans from an accountability standpoint.? Networking, Connectivity and Economy of Scale, too While network-to-network connectivity between Termi- nal Operators can exist between sequel capable servers to cross-deck-data across the Port Complex, the cost of adding ???the BeastBox provides off-the-hook throughput speed, while integrating policy and strategy into technology that includes a biometric contact card reader interface with pin, facial recognition card reader HD CCTV cameras, and Voice Over IP. 46 I Maritime Professional I 4Q 2012MP #4 34-49.indd 46MP #4 34-49.indd 4611/12/2012 9:48:38 AM11/12/2012 9:48:38 AM