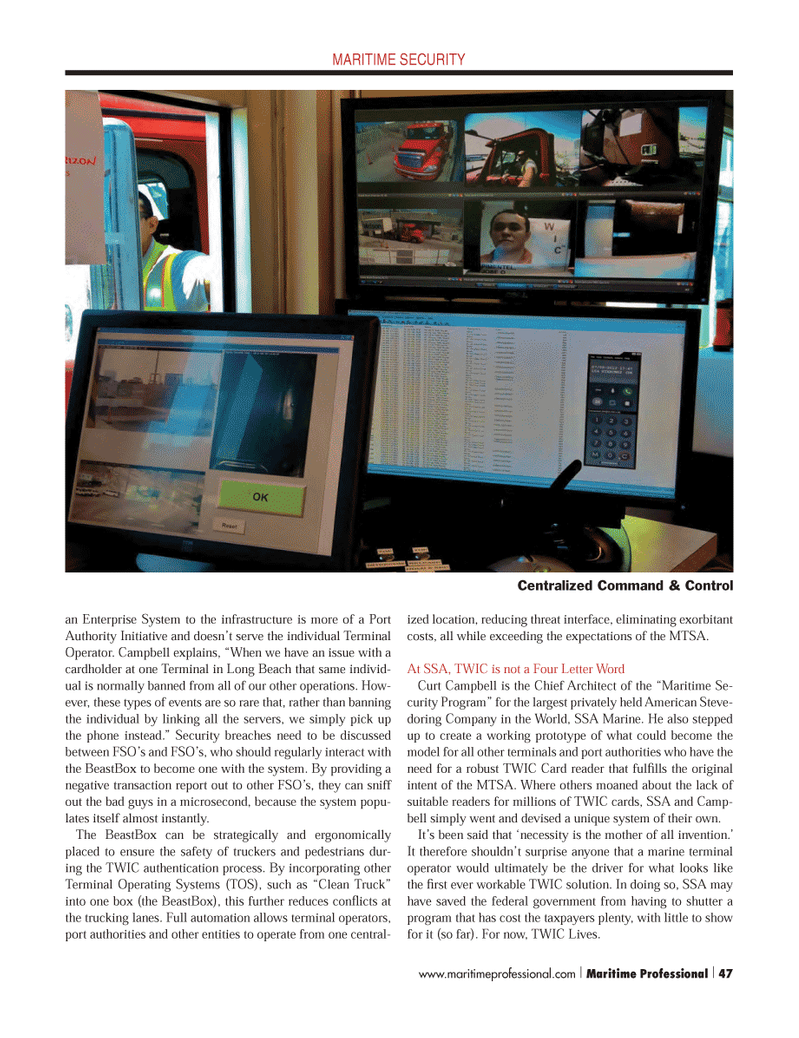 MARITIME SECURITYan Enterprise System to the infrastructure is more of a Port Authority Initiative and doesn?t serve the individual Terminal Operator. Campbell explains, ?When we have an issue with a cardholder at one Terminal in Long Beach that same individ- ual is normally banned from all of our other operations. How- ever, these types of events are so rare that, rather than banning the individual by linking all the servers, we simply pick up the phone instead.? Security breaches need to be discussed between FSO?s and FSO?s, who should regularly interact with the BeastBox to become one with the system. By providing a negative transaction report out to other FSO?s, they can sniff out the bad guys in a microsecond, because the system popu-lates itself almost instantly. The BeastBox can be strategically and ergonomically placed to ensure the safety of truckers and pedestrians dur- ing the TWIC authentication process. By incorporating other Terminal Operating Systems (TOS), such as ?Clean Truck? into one box (the BeastBox), this further reduces con icts at the trucking lanes. Full automation allows terminal operators, port authorities and other entities to operate from one central-ized location, reducing threat interface, eliminating exorbitant costs, all while exceeding the expectations of the MTSA. At SSA, TWIC is not a Four Letter Word Curt Campbell is the Chief Architect of the ?Maritime Se- curity Program? for the largest privately held American Steve- doring Company in the World, SSA Marine. He also stepped up to create a working prototype of what could become the model for all other terminals and port authorities who have the need for a robust TWIC Card reader that ful lls the original intent of the MTSA. Where others moaned about the lack of suitable readers for millions of TWIC cards, SSA and Camp- bell simply went and devised a unique system of their own. It?s been said that ?necessity is the mother of all invention.? It therefore shouldn?t surprise anyone that a marine terminal operator would ultimately be the driver for what looks like the  rst ever workable TWIC solution. In doing so, SSA may have saved the federal government from having to shutter a program that has cost the taxpayers plenty, with little to show for it (so far). For now, TWIC Lives. Centralized Command & Control www.maritimeprofessional.com | Maritime Professional | 47MP #4 34-49.indd 47MP #4 34-49.indd 4711/12/2012 9:48:48 AM11/12/2012 9:48:48 AM