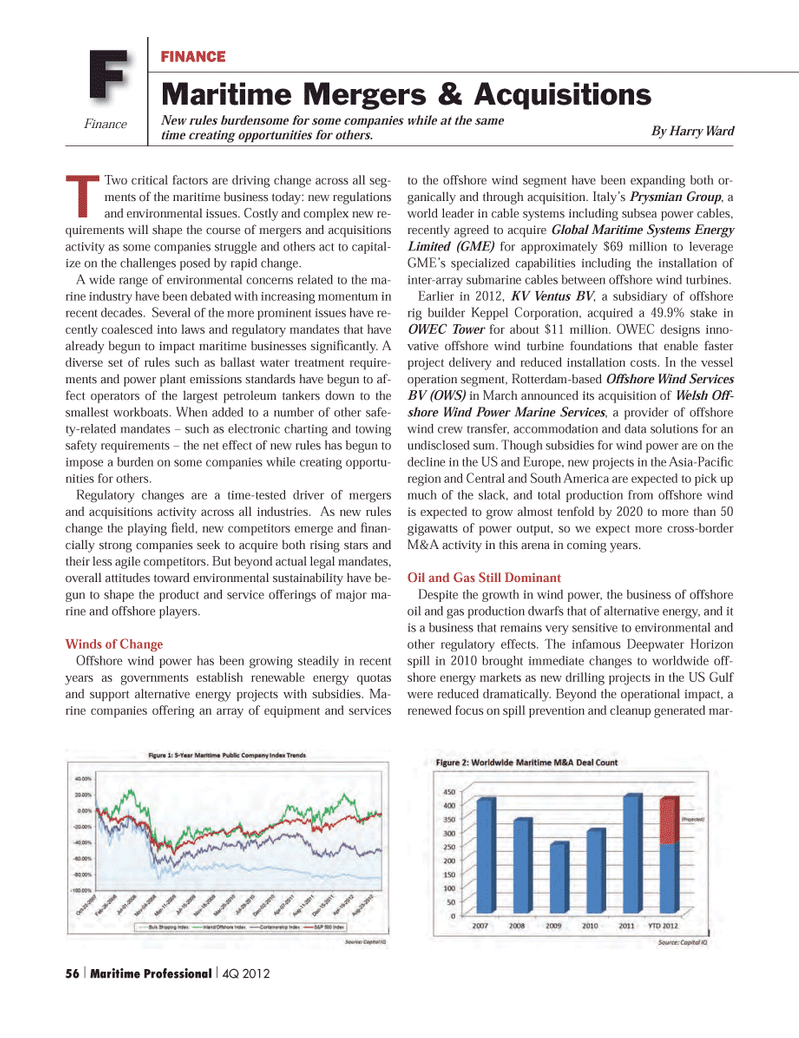 TTwo critical factors are driving change across all seg- ments of the maritime business today: new regulations and environmental issues. Costly and complex new re- quirements will shape the course of mergers and acquisitions activity as some companies struggle and others act to capital- ize on the challenges posed by rapid change.A wide range of environmental concerns related to the ma- rine industry have been debated with increasing momentum in recent decades. Several of the more prominent issues have re- cently coalesced into laws and regulatory mandates that have already begun to impact maritime businesses signiÞ cantly. A diverse set of rules such as ballast water treatment require- ments and power plant emissions standards have begun to af- fect operators of the largest petroleum tankers down to the smallest workboats. When added to a number of other safe- ty-related mandates Ð such as electronic charting and towing safety requirements Ð the net effect of new rules has begun to impose a burden on some companies while creating opportu- nities for others. Regulatory changes are a time-tested driver of mergers and acquisitions activity across all industries. As new rules change the playing Þ eld, new competitors emerge and Þ nan-cially strong companies seek to acquire both rising stars and their less agile competitors. But beyond actual legal mandates, overall attitudes toward environmental sustainability have be- gun to shape the product and service offerings of major ma- rine and offshore players. Winds of Change Offshore wind power has been growing steadily in recent years as governments establish renewable energy quotas and support alternative energy projects with subsidies. Ma- rine companies offering an array of equipment and services to the offshore wind segment have been expanding both or- ganically and through acquisition. ItalyÕs Prysmian Group, a world leader in cable systems including subsea power cables, recently agreed to acquire Global Maritime Systems Energy Limited (GME) for approximately $69 million to leverage GMEÕs specialized capabilities including the installation of inter-array submarine cables between offshore wind turbines. Earlier in 2012, KV Ventus BV , a subsidiary of offshore rig builder Keppel Corporation, acquired a 49.9% stake in OWEC Tower for about $11 million. OWEC designs inno- vative offshore wind turbine foundations that enable faster project delivery and reduced installation costs. In the vessel operation segment, Rotterdam-based Offshore Wind Services BV (OWS) in March announced its acquisition of Welsh Off- shore Wind Power Marine Services , a provider of offshore wind crew transfer, accommodation and data solutions for an undisclosed sum. Though subsidies for wind power are on the decline in the US and Europe, new projects in the Asia-PaciÞ c region and Central and South America are expected to pick up much of the slack, and total production from offshore wind is expected to grow almost tenfold by 2020 to more than 50 gigawatts of power output, so we expect more cross-border M&A activity in this arena in coming years. Oil and Gas Still DominantDespite the growth in wind power, the business of offshore oil and gas production dwarfs that of alternative energy, and it is a business that remains very sensitive to environmental and other regulatory effects. The infamous Deepwater Horizon spill in 2010 brought immediate changes to worldwide off- shore energy markets as new drilling projects in the US Gulf were reduced dramatically. Beyond the operational impact, a renewed focus on spill prevention and cleanup generated mar- Finance FINANCEMaritime Mergers & Acquisitions New rules burdensome for some companies while at the same time creating opportunities for others. FBy Harry Ward 56 | Maritime Professional | 4Q 2012MP #4 50-63.indd 56MP #4 50-63.indd 5611/12/2012 10:10:56 AM11/12/2012 10:10:56 AM