The recently announced promotion of Craig Perciavalle to President, Austal USA was a logical one. At Austal since 2007, he moves up after serving as Senior Vice President of Operations. Significantly, he oversaw Austal’s transition from a conventional commercial shipyard to an efficient, modular manufacturer that has improved its metrics and economy of scale with each new hull. Eventually, that could mean commercial, series build contracts – something Austal USA has already proven it can do. In a domestic shipbuilding market that is fraught with worries about sequester, reduced defense spending and other federal budgetary concerns, Perciavalle takes the helm at a time when Austal’s risk must be managed and bets hedged against any eventuality.

Austal USA today finds itself plowing into 2013 with the proverbial bone in its teeth, powered by an enviably fat U.S. government backorder book, possibly the most modern and efficient manufacturing infrastructure in U.S. shipbuilding and the leadership of a new President who, over the past five years, helped to make all that happen. Nevertheless, domestic shipbuilders all know that DoD and DHS spending cuts are coming. For those yards heavily leveraged in government contracts – and Austal is certainly one of them – that has to be a nagging concern. That said; Austal may be as well positioned to ride out the storm as anyone.
Best known as America’s largest aluminum shipbuilding company, Austal USA also benefits from its position as a provider of design, construction and support of customized, high-performance aluminum vessels for the commercial high-speed ferry market. A full tour of the gleaming, meticulously clean Gulf Coast facility reveals an impressive assembly line infrastructure and a walk-through of vessels rapidly approaching completion at its berths. Under contract to build ten 103-meter JHSVs under a $1.6 billion contract and five 127-meter Independence-variant LCS class ships, part of a 10-ship, $3.5 billion contract, that fat backorder book would seem to preclude any need to plunge into commercial waters any time soon.
Perciavalle, however, and perhaps hinting at what could come next, adds, “We’ve been very fortunate to have constructed a brand new facility, custom designed to support lean manufacturing principals and modular construction.  Our facility and manufacturing philosophy can accommodate various types of vessels within both the Government and Commercial sectors. Furthermore, the layout of our facility is designed to be flexible enough to be adjusted, if necessary, to accommodate other products.”
2012 saw Austal USA continue to generate new work, finish existing contracts and commence work on still others. In late December, Austal was awarded a $166 million modification to a previous award for Joint High Speed Vessel (JHSV) 10. Two weeks prior to that, the Military Sealift Command accepted delivery of the first JHSV. With three more of these vessels under construction and as the 12th ship delivered by Austal USA in 11 years, JHSV 1 is part of an enviable benchmark that could easily lend itself to a commercial, series-build capability. Of more immediate concern is what could happen should the budget impasse in Washington rear its ugly head once again.
Perciavalle remains pragmatic. “We would rather not speculate on what may or may not happen with sequestration. We believe our best defense against sequestration comes from focusing on what we can directly control, successfully executing our existing contracts and providing the two most cost-effective and flexible platforms to the Navy.”
Leaving aside uncertainties in Washington, it cannot be denied that the Austal USA’s recent success has been one of the more upbeat stories when it comes to domestic shipbuilding today. The new federal contracts will require Austal to increase its Mobile, Alabama workforce to as many as 4,000 employees – something that may be as equally challenging as securing all that work in the first place. Austal’s new President explains, “To support both the LCS and JHSV programs, we’ve been able to grow our workforce by over 2300 employees since January of 2010, from about 1000 to over 3,300 today and counting, all while maintaining an excellent safety record. This has certainly been a challenge, but we attribute much of our success to our geographic location where a vigorous shipbuilding industry and experienced workers are based; our drive to being an “employer of choice” by focusing on providing competitive salary and benefits--as well as a clean and safe work environment for our employees; our lean manufacturing processes which facilitates the incorporation of new hires and enables us to leverage the strengths of all employees of various experience levels; and most importantly, having a robust training program that we’ve been able to develop with incredible support from the State of Alabama.” Austal started the four-year Apprentice Training Program over five years ago and has successfully graduated four classes into its work force.Austal’s unique modular approach to ship manufacturing already has produced 35 of the 37 modules used to form the 127-meter aluminum trimaran Jackson (LCS 6). The economy of scale and lessons learned through its series-build approach are both quickly yielding dividends. Perciavalle adds enthusiastically, “As we move closer to delivering the second ship of each class in the coming months, we’ve seen substantial performance improvement on both programs. As our workforce matures, we anticipate our ability to drive cost out of each ship to consistently increase as we quickly come down the learning curve.” Unspoken in all of that is the eventual ability of this yard to quickly transition those efficiencies to commercial work, if the need arises.
Managing risk is never an easy task. That said, and over the past few years, Austal has primarily focused on building a shipyard and securing the LCS and JHSV contracts. As it matures its considerable manufacturing processes through its federal work, other opportunities do exist beyond these contracts. Craig Perciavalle therefore has no intention of sitting on his hands even as he oversees a large and profitable backlog. He sums up the Austal philosophy neatly by saying, “We will also focus on diversifying our portfolio and positioning our company to capitalize upon our unique Pacific heritage, our facilities in the Pacific Basin, and our partnerships throughout the Pacific Rim.”

(As published in the 1Q edition of Maritime Professional - www.maritimeprofessional.com) 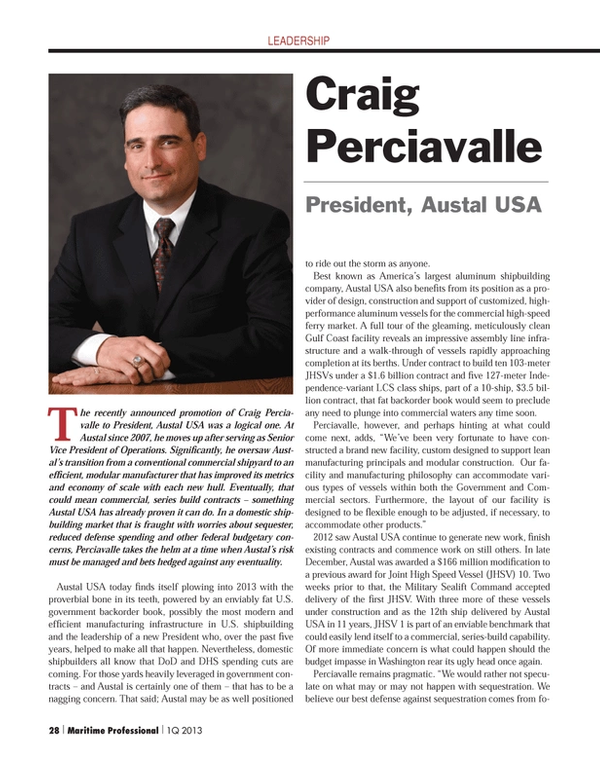