100m gt strong, International Registries and the Republic of the Marshall Islands Registry prove that quality and safety are not mutually exclusive.

When International Registries, Inc. and its affiliates (IRI) and Republic of the Marshall Islands (RMI) Registry recently pushed through 100 million gross tons, the impressive number kept RMI firmly planted in the number three position within the ranks of global open registries. And, yet, that enviable market position obscures so many other metrics which are more important. With a world-leading average bluewater vessel age of just 7.9 years, IRI’s safety and quality numbers – according to ICS, the U.S. Coast Guard and the IMO – are even more impressive. How they achieved those metrics is the real story.
Over time, IRI, who provides administrative and technical support to RMI, has perfected the decentralization of Registry services. According to William Gallagher, IRI President, one of the key competitive advantages of a quality flag state is the ability to provide competent and timely services to clients, anywhere in the world. He adds, “The backbone of the organization is truly the experienced maritime personnel positioned in our network of 25 worldwide offices. Shipowners are able to reach a Registry representative in their own time zone and language, using a 24/7 duty officer system that enables industry stakeholders to reach a representative in emergency situations.” Beyond this, says Gallagher, “Our robust vetting process for ships entering and remaining in the Registry enables us to ensure that only quality owners and operators make up the fleet of the RMI Registry.”
At local RMI offices, technical and marine safety status boards enable RMI personnel to ensure timely responses, even when an event crosses from one time zone to the next. These status boards also enable personnel to see all issues associated with a particular vessel.

Decentralization: The key to Quality and Safety
In most business models, when volume goes up, the quality correspondingly goes down. Not so with RMI. Growing from just 39 vessels and 2 million gross tons in 1990 to 100 million gross tons and more than 2,250 vessels today, fleet quality nevertheless remains at an enviously high level. And, the numbers simply don’t lie.

RMI’s white list status on the Paris and Tokyo Memorandums of Understanding (MoUs) and being included on the United States Coast Guard’s (USCG) Qualship 21 roster for nine consecutive years is unprecedented. Started in 2011 by the U.S. Coast Guard, QUALSHIP 21 recognizes high-quality vessels and their commitment to safety and quality. Bill Gallagher explains the ratings even further. “The scorecard from the port State control (PSC) jurisdictions is really a clear measurement of how a Registry is doing. While the RMI fleet has grown significantly on an annual basis, it has still been able to maintain the same level of quality on a global basis with the various MoUs.”
Separately, the latest ICS “Flag State Performance Table” has the Marshall Islands with no less than 18 out of 18 “positive performance ratings” or Green indicators. Very few other flags can boast the same performance, still fewer in flag fleets as large as the Marshall Islands. The numbers did not come about by accident. That said; IRI is not sitting on its hands.
Improving IRI’s unique, decentralized Registry model is an ongoing process that involves further refinement of internal systems through IT resources to enhance the ability to communicate, monitor and deliver the same quality services around the world, regardless of how big the RMI Registry becomes. As RMI builds up its own quality department, the decentralized model will be a big part of it. The Maritime Services Group (MSG), headed by COO John Radisch, operates out of London. Gallagher adds, “I like the fact that our COO is in London. He can catch up on everybody’s day. He talks with Asia at the end of their day, Europe during his work day and in the afternoon, he’s coordinating with headquarters.”
Quarterly meetings of the MSG are aimed, in part, in improving the RMI duty officer system. In place since 1991 on a 24/7 basis, the program was, at one time, solely U.S. based. Not anymore. With offices in Asia, the Middle East, the U.S. and West Coasts, ship owners and classification societies can call at any time with any problem.
At RMI, business is business, but that doesn’t get in the way of maintaining a quality registry. Gallagher is adamant: “Since we are a privately run maritime registry, I think the biggest challenge we have is in balancing commercial operations and our responsibility as a flag State Administration. The decision to further decentralize the RMI Registry’s maritime operations was with a vision to more efficiently provide services wherever an RMI flagged ship may call and to show shipowners/operators that the RMI Registry does take its responsibilities as a flag State administration seriously. Providing timely registry related services to a growing global fleet from one location would have been impossible; a delayed response from the Registry can mean additional time spent in port which can cost owners money.”

Changing Roles: Increased Responsibilities
As the role of the flag State has changed during the past decade, participation at venues such as the International Maritime Organization (IMO) and the International Labour Organization (ILO) ensure balance in actual practice with regulation has become a critical part of the business. That’s because even as the proliferation of maritime regulations impact the way a registry does business, Flag States themselves ratify important international conventions to ensure that a proactive approach is taken with respect to marine safety, security, environmental protection and social responsibility. Gallagher adds, “Flag States should, in turn, promptly inform shipowners/operators of such ratifications and provide them with a clear explanation in good time, with guidance on how to tackle new regulations so that their ships can continue to trade without delay or disruption. Our participation with the IMO and ILO, and our work with owners in implementing international conventions means that we are allocating more resources to this area.”
That ‘allocation’ means developing the right personnel. In the last five years alone, RMI has hired personnel specialized in areas such as LNG, and offshore support and production vessels. Only in this way, explains Gallagher, can flag states provide timely support to ensure compliance and avoid unnecessarily port delays. “By learning to grow and change as the industry grows and changes, the RMI Registry is able to work with owners and PSC locally to quickly respond and resolve any issues. This has enabled us to continue to rank high in terms of flag State performance.”

High Class: Partnering with IACS
At RMS, it is no accident that all bluewater tonnage is IACS classed. Bill Gallagher, for good reasons, wouldn’t have it any other way. With more regulations in the pipeline and a corresponding increase in PSC inspections, the importance of working with a reputable ‘class’ society will increase. Cost is of course a major consideration, but ensuring that a ship is safe and compliant will in the long run save owners time and money.
For IRI and RMI, it simply comes down to the standards that IACS class societies maintain and the resources that they have. At RMI, Class does all the ISM and the MLC audits. Gallagher says, “The reason we take that approach is that they have so much experience, resources and training. Interestingly, we’re the only 100 percent compliant group in terms of MLC and ISPS. We debated internally as to whether we could do some of these things internally and we decided that IACS class societies were in a better position to do that.” Gallagher puts his money where his mouth is. “Understand that from a revenue standpoint, that’s revenue we’re leaving on the table. But, it’s not about money; it’s about doing the right thing. We had already been delegating ISM and ISPS to class at that point, and when MLC came along we decided to do the same thing. That doesn’t mean that we don’t get heavily involved – we’ve done MLC seminars around the world for our owners. It works well for us. The proof is in the pudding with the QUALSHIP ratings. If you look at our success, a lot of that has to do with IACS.”

Vetting: A Two Way Street
If an owner/operator does not meet the standards of the RMI Registry, then that vessel may be turned away. At one time, RMI rejected one out of three vessels, but, says Gallagher, that has changed. “Owners/operators no longer apply for registration with the RMI Registry if they know that their vessel will not meet our standards. We politely tell them No.”
IRI maintains that its intent has never been to be the largest Registry in the world, but instead the choice of flag for quality owners and operators. IRI defines a quality shipowner/operator as one that takes marine safety, security, environmental protection and social responsibility seriously. Gallagher insists, “We have owners who will lay up a ship even when there are commercial pressures as they look at those three elements and do the right thing.” In turn, though, he knows that owners are also vetting the Registry with their own criteria. The numbers say that they like what they see.
In a time of razor thin operating margins that translate into leaner and meaner operators with fewer back office staff, today’s owners and operators sometimes can’t keep a lot of in-house expertise. Gallagher says they often look to the flag state for help. “In turn, we have a lot of technical help in house – here and overseas. It’s an issue of resources. It’s a collaborative process between flag state, class and the operator itself. You simply can’t do it alone anymore.”
Accidents will happen. That said, and in its latest accounting report, ICS shows no recent Marshall Islands casualties. When something does occur, though, RMI has a strong, primarily in-house group that investigates casualties. Gallagher adds, “We rely a lot less on contract inspectors then we did just five years ago and we conduct worldwide training seminars for our people that last as long as two weeks. We strive for uniformity in our safety inspectors.”

RMI’s Modern Registry: Evolving, International and in it for the Long Haul
Bill Gallagher ticks off the metrics that epitomize the RMI business model, one by one, without hesitation. “We’ve been around since 1948. We’ve plowed the money back into the business and we’re in this for the long haul. We internationalize – but in one standard. Whatever answer you get in Europe or Asia is the same answer you’ll get in the United States. As you grow, you have to staff up to match the size of the fleet. Sometimes, I can’t believe that we have 170 folks working overseas, but we do. These aren’t contractors. In 2000, we had just five offices overseas and 30 employees.”
Pointing to the 25 RMI offices spanning the globe today, Gallagher summed it up for MarPro: “100 million tons is nice, but we’re not going to rest on our laurels. Because the business can’t be run exclusively from the United States anymore, our expertise is truly international. First and foremost, we’re a flag state administration and we’re not involved in any other ancillary businesses. Along the way, we’ve changed the type of people that you bring in to run a registry. You need banking, finance skills and legal savvy, just as much as you need the operational and technical expertise. We’ll keep innovating. A big job is to recruit people who have the expertise that can replace the current generation of flag state people. We’re doing that.
And, it appears to be working. There IS strength in numbers. Who knew?

(As published in the 1Q 2014 edition of Maritime Professional - www.maritimeprofessional.com) 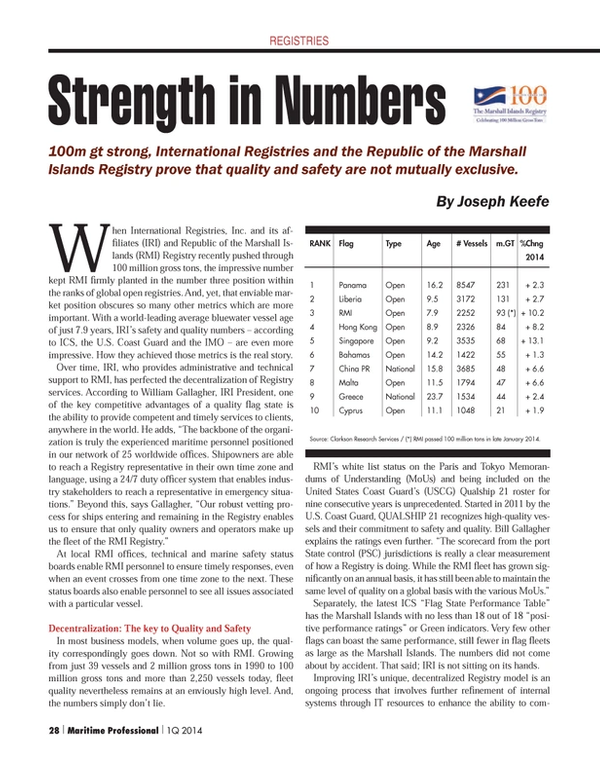