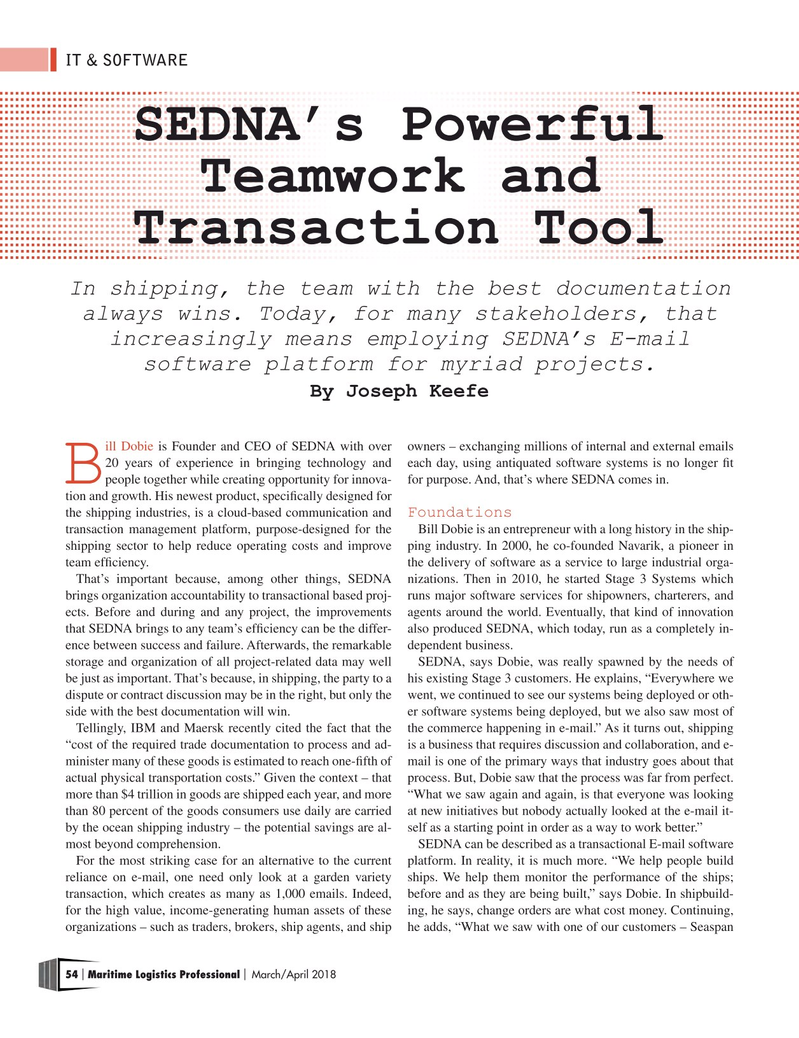 In shipping, the team with the best documentation always wins. Today, for many stakeholders, that increasingly means employing SEDNA’s E-mail software platform for myriad projects.

By Joseph Keefe ill Dobie is Founder and CEO of SEDNA with over owners – exchanging millions of internal and external emails 20 years of experience in bringing technology and each day, using antiquated software systems is no longer ft

Bpeople together while creating opportunity for innova- for purpose. And, that’s where SEDNA comes in.

tion and growth. His newest product, specifcally designed for the shipping industries, is a cloud-based communication and Foundations transaction management platform, purpose-designed for the Bill Dobie is an entrepreneur with a long history in the ship- shipping sector to help reduce operating costs and improve ping industry. In 2000, he co-founded Navarik, a pioneer in team effciency. the delivery of software as a service to large industrial orga-

That’s important because, among other things, SEDNA nizations. Then in 2010, he started Stage 3 Systems which brings organization accountability to transactional based proj- runs major software services for shipowners, charterers, and ects. Before and during and any project, the improvements agents around the world. Eventually, that kind of innovation that SEDNA brings to any team’s effciency can be the differ- also produced SEDNA, which today, run as a completely in- ence between success and failure. Afterwards, the remarkable dependent business.

storage and organization of all project-related data may well SEDNA, says Dobie, was really spawned by the needs of be just as important. That’s because, in shipping, the party to a his existing Stage 3 customers. He explains, “Everywhere we dispute or contract discussion may be in the right, but only the went, we continued to see our systems being deployed or oth- side with the best documentation will win. er software systems being deployed, but we also saw most of

Tellingly, IBM and Maersk recently cited the fact that the the commerce happening in e-mail.” As it turns out, shipping “cost of the required trade documentation to process and ad- is a business that requires discussion and collaboration, and e- minister many of these goods is estimated to reach one-ffth of mail is one of the primary ways that industry goes about that actual physical transportation costs.” Given the context – that process. But, Dobie saw that the process was far from perfect. more than $4 trillion in goods are shipped each year, and more “What we saw again and again, is that everyone was looking than 80 percent of the goods consumers use daily are carried at new initiatives but nobody actually looked at the e-mail it- by the ocean shipping industry – the potential savings are al- self as a starting point in order as a way to work better.” most beyond comprehension. SEDNA can be described as a transactional E-mail software

For the most striking case for an alternative to the current platform. In reality, it is much more. “We help people build reliance on e-mail, one need only look at a garden variety ships. We help them monitor the performance of the ships; transaction, which creates as many as 1,000 emails. Indeed, before and as they are being built,” says Dobie. In shipbuild- for the high value, income-generating human assets of these ing, he says, change orders are what cost money. Continuing, organizations – such as traders, brokers, ship agents, and ship he adds, “What we saw with one of our customers – Seaspan 54 Maritime Logistics Professional March/April 2018 | |