Avoid empty container moves and save environmental costs in shipping.

It is an all too common scenario in container logistics: A carrier has 100 empty boxes in Hamburg that must be transported to China for export cargo. None of the carrier’s northern European customers’ needs these containers to ship goods to China. So, the carrier must pay USD $500 per container (mainly fees charged by terminals and trucking companies), to transport its empty boxes from Hamburg to Shanghai.

On average, the CO2 emission per container handled from China to Europe amounts to 1.913 kg. Combining these numbers with the fact that every third container is shipped empty on the seas, it becomes evident that the environment is experiencing excessive and unnecessary pollution. There is room for improvement in these numbers and carriers can decrease their environmental footprint significantly. This would not only apply to carbon dioxide but also other greenhouse gases dangerous to marine – and bird life.

The Impact of Empty Container Repositioning
Containers are methods of moving goods globally from exporting countries to importing. After unloading the full container, a new return transport stretch has to be found, as moving an empty container costs almost the same as moving a full one. A large number of containers are repositioned empty every year because of failed attempts to find a new transport stretch. This comes at an estimated industry wide cost of $15-$20bn annually, according to BCG, in addition to the unnecessary associated pollution.

Arising from a mixture of structural trade imbalances and liner and network inefficiency, a lot is to be done about the latter, but not much to do with trade imbalances. Being the most important source of global empty container accumulation, trade imbalances happen when countries’ trade balances are either in significant surpluses or deficits. Systematic accumulation of containers will take place when a region imports more than it exports, while regions that export more than they import will face container shortages.

Roughly one-third of repositioning costs relate to carrier-specific imbalances. A carrier whose customers are scattered among port and inland destinations within a given country or whose portfolio of export and import business within the country is imbalanced will likely end up having to move empty containers. Sales forces contribute to imbalances by focusing on increasing head-haul volume, rather than optimizing overall container flows across services. Issues within a carrier’s network, such as delays and the absence of direct vessel – or inland-network links between locations served – can also promote imbalances and make them harder to correct. Moreover, most carriers are not able to forecast their positioning needs with sufficient accuracy to fully optimize flows before imbalances arise.

It is estimated that more than 6.4 million TEUs are repositioned empty every year, and with them, a cumulative resulting 12,243,200 kg of CO2 annually.

“The benefit of the platform is that you are not limited to your personal network, you can engage with more than 300 companies right now,” Florian Frese of Container xChange said. Users sign a multi-party interchange agreement that speeds up the contracting process by days or weeks.

Container xChange has more than 300 users on its platform, including ocean carriers, container leasing companies, container traders, non-vessel-operating common carriers and freight forwarders. The service covers 2,500 locations worldwide and offers more than 300,000 boxes every week.
Users set their own rates and terms and conditions such as the container value and damage protection plan. Users search the listing for containers in locations where they are needed and with a destination close to where the container owner would like the boxes to end up. Over time the system learns an individual's search patterns.

“Once the system gets to know the customer, we can approach them proactively,” says Christian Roeloffs, managing director of Container xChange. Container xChange is a one-stop shop for SOC containers and empty container repositioning covering container tracking, insurance, payment handling and many other services. Solving your empty container issues may just be a ‘click’ away. https://container-xchange.com 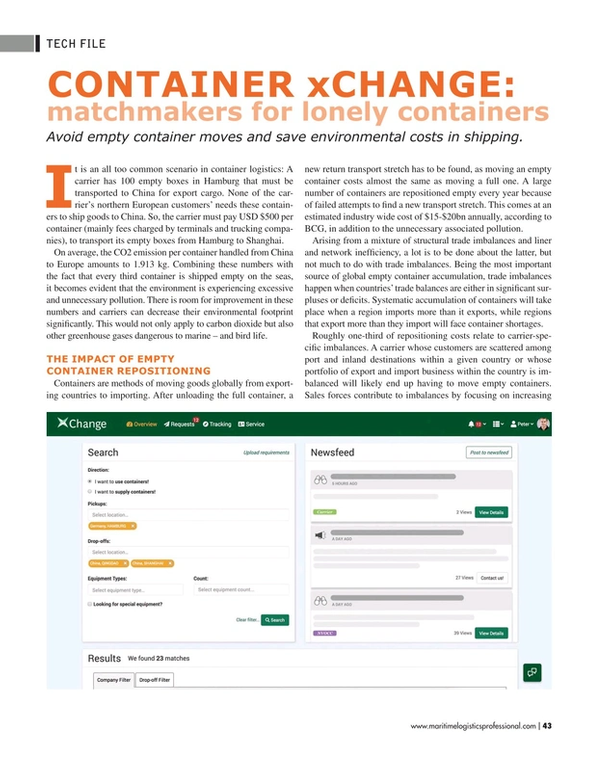 Other stories from Mar/Apr 2019 issue