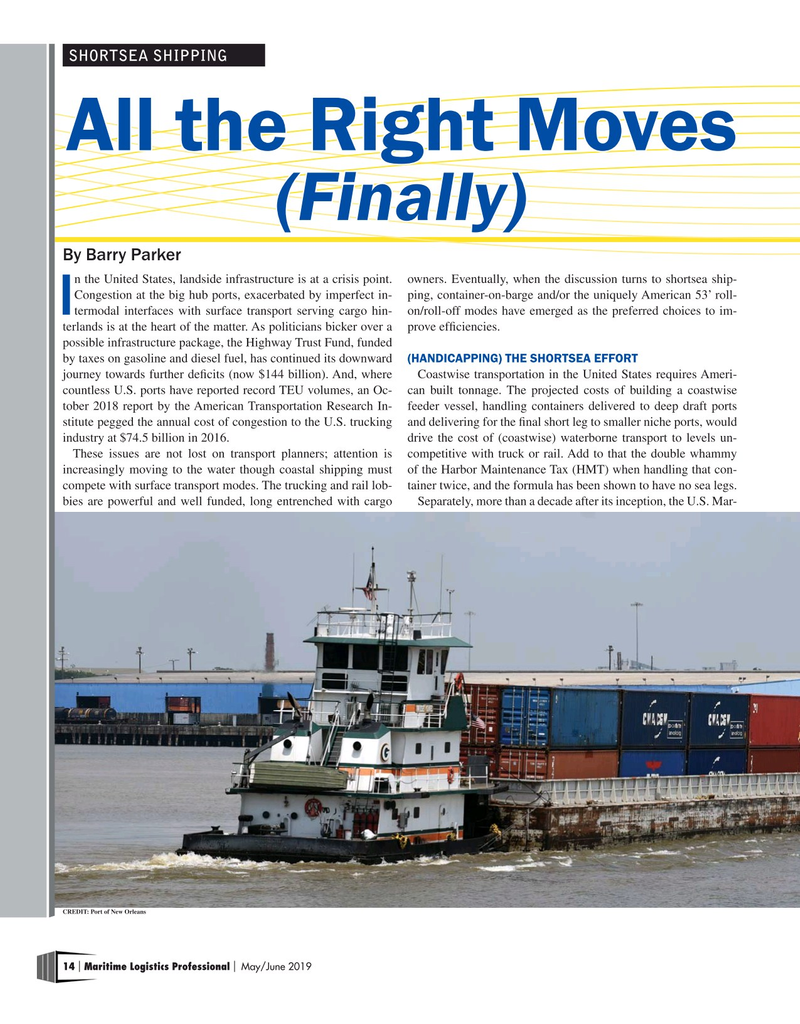 All the Right Moves (Finally)

By Barry Parker n the United States, landside infrastructure is at a crisis point. owners. Eventually, when the discussion turns to shortsea ship-

Congestion at the big hub ports, exacerbated by imperfect in- ping, container-on-barge and/or the uniquely American 53’ roll- termodal interfaces with surface transport serving cargo hin- on/roll-off modes have emerged as the preferred choices to im-

I terlands is at the heart of the matter. As politicians bicker over a prove ef?ciencies. possible infrastructure package, the Highway Trust Fund, funded by taxes on gasoline and diesel fuel, has continued its downward (HANDICAPPING) THE SHORTSEA EFFORT journey towards further de?cits (now $144 billion). And, where Coastwise transportation in the United States requires Ameri- countless U.S. ports have reported record TEU volumes, an Oc- can built tonnage. The projected costs of building a coastwise tober 2018 report by the American Transportation Research In- feeder vessel, handling containers delivered to deep draft ports stitute pegged the annual cost of congestion to the U.S. trucking and delivering for the ?nal short leg to smaller niche ports, would industry at $74.5 billion in 2016. drive the cost of (coastwise) waterborne transport to levels un-

These issues are not lost on transport planners; attention is competitive with truck or rail. Add to that the double whammy increasingly moving to the water though coastal shipping must of the Harbor Maintenance Tax (HMT) when handling that con- compete with surface transport modes. The trucking and rail lob- tainer twice, and the formula has been shown to have no sea legs.

bies are powerful and well funded, long entrenched with cargo Separately, more than a decade after its inception, the U.S. Mar-