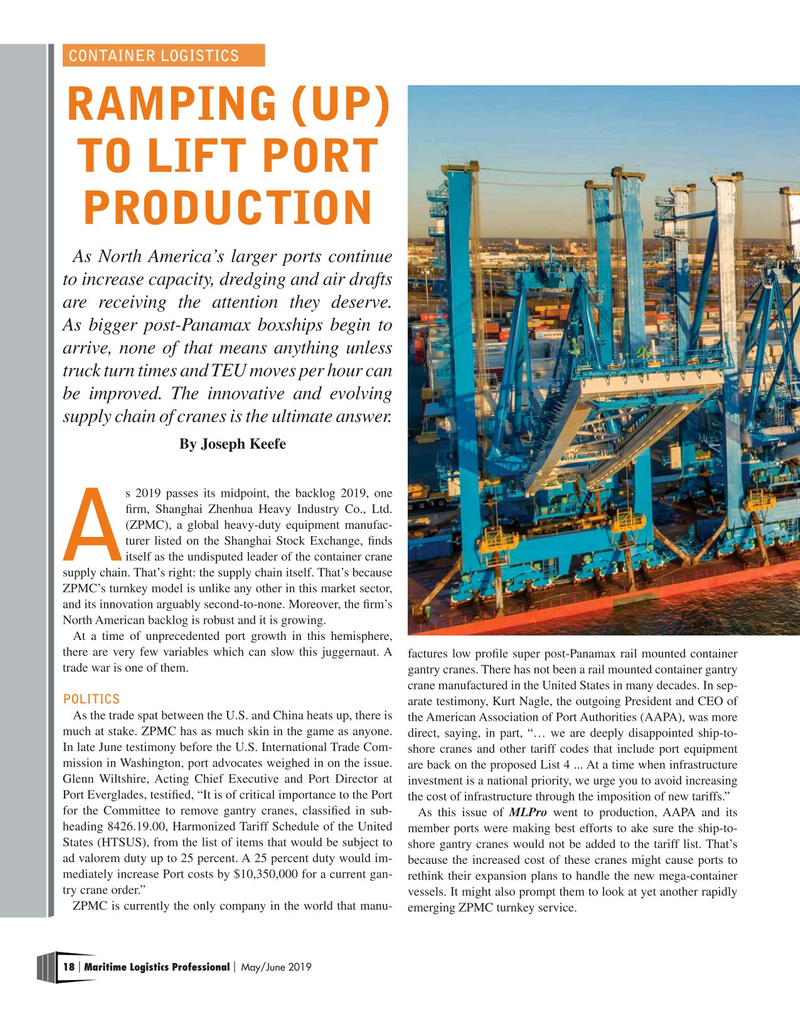 As North America’s larger ports continue to increase capacity, dredging and air drafts are receiving the attention they deserve.

As bigger post-Panamax boxships begin to arrive, none of that means anything unless truck turn times and TEU moves per hour can be improved. The innovative and evolving supply chain of cranes is the ultimate answer.

By Joseph Keefe s 2019 passes its midpoint, the backlog 2019, one ?rm, Shanghai Zhenhua Heavy Industry Co., Ltd. (ZPMC), a global heavy-duty equipment manufac- turer listed on the Shanghai Stock Exchange, ?nds itself as the undisputed leader of the container crane

ZPMC’s turnkey model is unlike any other in this market sector, and its innovation arguably second-to-none. Moreover, the ?rm’s

North American backlog is robust and it is growing.

At a time of unprecedented port growth in this hemisphere, there are very few variables which can slow this juggernaut. A factures low pro?le super post-Panamax rail mounted container trade war is one of them.

gantry cranes. There has not been a rail mounted container gantry crane manufactured in the United States in many decades. In sep-

As the trade spat between the U.S. and China heats up, there is the American Association of Port Authorities (AAPA), was more much at stake. ZPMC has as much skin in the game as anyone. direct, saying, in part, “… we are deeply disappointed ship-to-

In late June testimony before the U.S. International Trade Com- shore cranes and other tariff codes that include port equipment mission in Washington, port advocates weighed in on the issue. are back on the proposed List 4 ... At a time when infrastructure

Glenn Wiltshire, Acting Chief Executive and Port Director at investment is a national priority, we urge you to avoid increasing

Port Everglades, testi?ed, “It is of critical importance to the Port the cost of infrastructure through the imposition of new tariffs.” for the Committee to remove gantry cranes, classi?ed in sub-

As this issue of MLPro went to production, AAPA and its heading 8426.19.00, Harmonized Tariff Schedule of the United member ports were making best efforts to ake sure the ship-to-

States (HTSUS), from the list of items that would be subject to shore gantry cranes would not be added to the tariff list. That’s ad valorem duty up to 25 percent. A 25 percent duty would im- because the increased cost of these cranes might cause ports to mediately increase Port costs by $10,350,000 for a current gan- rethink their expansion plans to handle the new mega-container try crane order.” vessels. It might also prompt them to look at yet another rapidly

ZPMC is currently the only company in the world that manu- emerging ZPMC turnkey service.