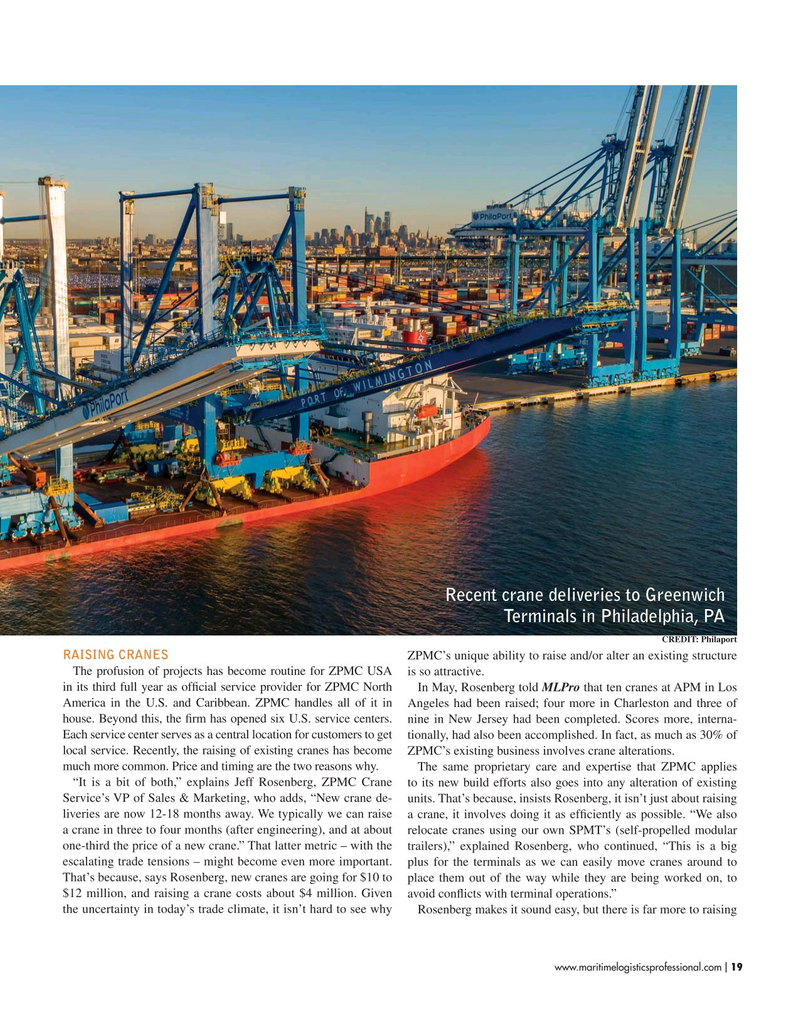 The profusion of projects has become routine for ZPMC USA is so attractive.

in its third full year as of?cial service provider for ZPMC North In May, Rosenberg told MLPro that ten cranes at APM in Los

America in the U.S. and Caribbean. ZPMC handles all of it in Angeles had been raised; four more in Charleston and three of house. Beyond this, the ?rm has opened six U.S. service centers. nine in New Jersey had been completed. Scores more, interna-

Each service center serves as a central location for customers to get tionally, had also been accomplished. In fact, as much as 30% of local service. Recently, the raising of existing cranes has become ZPMC’s existing business involves crane alterations.

much more common. Price and timing are the two reasons why. The same proprietary care and expertise that ZPMC applies “It is a bit of both,” explains Jeff Rosenberg, ZPMC Crane to its new build efforts also goes into any alteration of existing

Service’s VP of Sales & Marketing, who adds, “New crane de- units. That’s because, insists Rosenberg, it isn’t just about raising liveries are now 12-18 months away. We typically we can raise a crane, it involves doing it as ef?ciently as possible. “We also a crane in three to four months (after engineering), and at about relocate cranes using our own SPMT’s (self-propelled modular one-third the price of a new crane.” That latter metric – with the trailers),” explained Rosenberg, who continued, “This is a big escalating trade tensions – might become even more important. plus for the terminals as we can easily move cranes around to

That’s because, says Rosenberg, new cranes are going for $10 to place them out of the way while they are being worked on, to $12 million, and raising a crane costs about $4 million. Given avoid con?icts with terminal operations.” the uncertainty in today’s trade climate, it isn’t hard to see why Rosenberg makes it sound easy, but there is far more to raising www.maritimelogisticsprofessional.com 19