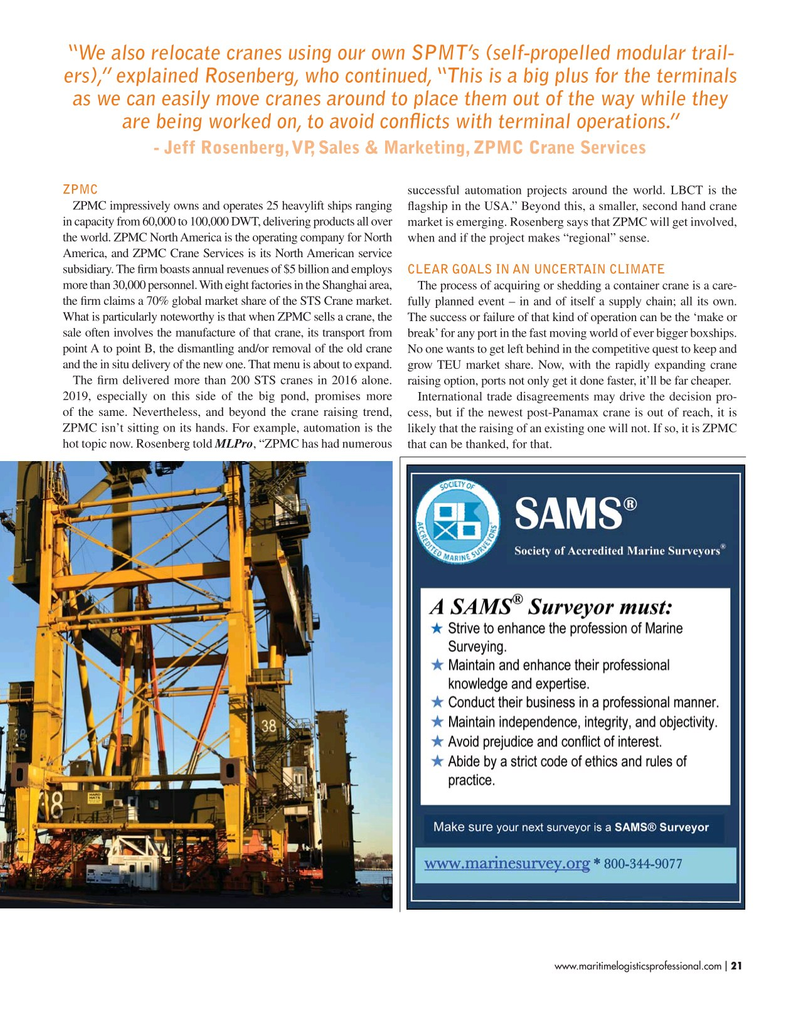 “We also relocate cranes using our own SPMT’s (self-propelled modular trail- ers),” explained Rosenberg, who continued, “This is a big plus for the terminals as we can easily move cranes around to place them out of the way while they are being worked on, to avoid conficts with terminal operations.” - Jeff Rosenberg, VP , Sales & Marketing, ZPMC Crane Services

ZPMC successful automation projects around the world. LBCT is the

ZPMC impressively owns and operates 25 heavylift ships ranging ?agship in the USA.” Beyond this, a smaller, second hand crane in capacity from 60,000 to 100,000 DWT, delivering products all over market is emerging. Rosenberg says that ZPMC will get involved, the world. ZPMC North America is the operating company for North when and if the project makes “regional” sense.

America, and ZPMC Crane Services is its North American service subsidiary. The ?rm boasts annual revenues of $5 billion and employs CLEAR GOALS IN AN UNCERTAIN CLIMATE more than 30,000 personnel. With eight factories in the Shanghai area, The process of acquiring or shedding a container crane is a care- the ?rm claims a 70% global market share of the STS Crane market. fully planned event – in and of itself a supply chain; all its own.

What is particularly noteworthy is that when ZPMC sells a crane, the The success or failure of that kind of operation can be the ‘make or sale often involves the manufacture of that crane, its transport from break’ for any port in the fast moving world of ever bigger boxships. point A to point B, the dismantling and/or removal of the old crane No one wants to get left behind in the competitive quest to keep and and the in situ delivery of the new one. That menu is about to expand. grow TEU market share. Now, with the rapidly expanding crane

The ?rm delivered more than 200 STS cranes in 2016 alone. raising option, ports not only get it done faster, it’ll be far cheaper.

2019, especially on this side of the big pond, promises more International trade disagreements may drive the decision pro- of the same. Nevertheless, and beyond the crane raising trend, cess, but if the newest post-Panamax crane is out of reach, it is

ZPMC isn’t sitting on its hands. For example, automation is the likely that the raising of an existing one will not. If so, it is ZPMC hot topic now. Rosenberg told MLPro, “ZPMC has had numerous that can be thanked, for that. www.maritimelogisticsprofessional.com 21