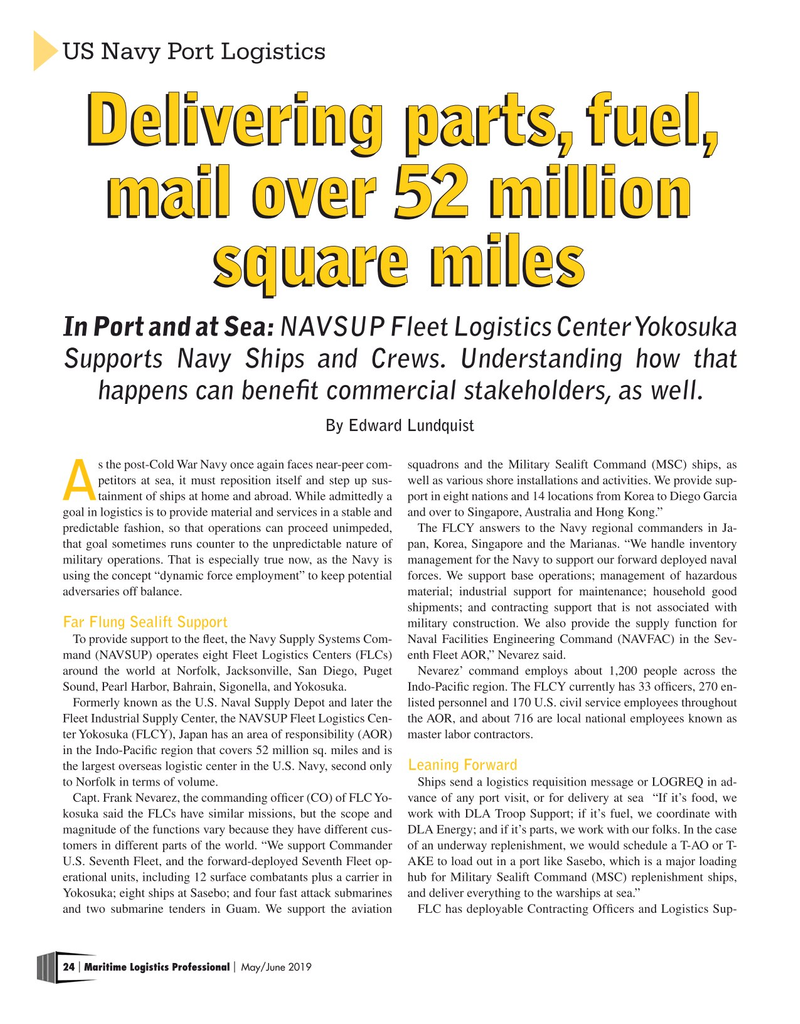 In Port and at Sea: NAVSUP Fleet Logistics Center Yokosuka

Supports Navy Ships and Crews. Understanding how that happens can beneft commercial stakeholders, as well.

By Edward Lundquist s the post-Cold War Navy once again faces near-peer com- squadrons and the Military Sealift Command (MSC) ships, as petitors at sea, it must reposition itself and step up sus- well as various shore installations and activities. We provide sup- tainment of ships at home and abroad. While admittedly a port in eight nations and 14 locations from Korea to Diego Garcia

A goal in logistics is to provide material and services in a stable and and over to Singapore, Australia and Hong Kong.” predictable fashion, so that operations can proceed unimpeded, The FLCY answers to the Navy regional commanders in Ja- that goal sometimes runs counter to the unpredictable nature of pan, Korea, Singapore and the Marianas. “We handle inventory military operations. That is especially true now, as the Navy is management for the Navy to support our forward deployed naval using the concept “dynamic force employment” to keep potential forces. We support base operations; management of hazardous adversaries off balance. material; industrial support for maintenance; household good shipments; and contracting support that is not associated with military construction. We also provide the supply function for

around the world at Norfolk, Jacksonville, San Diego, Puget Nevarez’ command employs about 1,200 people across the

Formerly known as the U.S. Naval Supply Depot and later the listed personnel and 170 U.S. civil service employees throughout

Fleet Industrial Supply Center, the NAVSUP Fleet Logistics Cen- the AOR, and about 716 are local national employees known as ter Yokosuka (FLCY), Japan has an area of responsibility (AOR) master labor contractors. in the Indo-Paci?c region that covers 52 million sq. miles and is the largest overseas logistic center in the U.S. Navy, second only

Leaning Forward to Norfolk in terms of volume. Ships send a logistics requisition message or LOGREQ in ad-

Capt. Frank Nevarez, the commanding of?cer (CO) of FLC Yo- vance of any port visit, or for delivery at sea “If it’s food, we kosuka said the FLCs have similar missions, but the scope and work with DLA Troop Support; if it’s fuel, we coordinate with magnitude of the functions vary because they have different cus- DLA Energy; and if it’s parts, we work with our folks. In the case tomers in different parts of the world. “We support Commander of an underway replenishment, we would schedule a T-AO or T-

U.S. Seventh Fleet, and the forward-deployed Seventh Fleet op- AKE to load out in a port like Sasebo, which is a major loading erational units, including 12 surface combatants plus a carrier in hub for Military Sealift Command (MSC) replenishment ships,

Yokosuka; eight ships at Sasebo; and four fast attack submarines and deliver everything to the warships at sea.” and two submarine tenders in Guam. We support the aviation FLC has deployable Contracting Of?cers and Logistics Sup- 24 Maritime Logistics Professional May/June 2019 | |