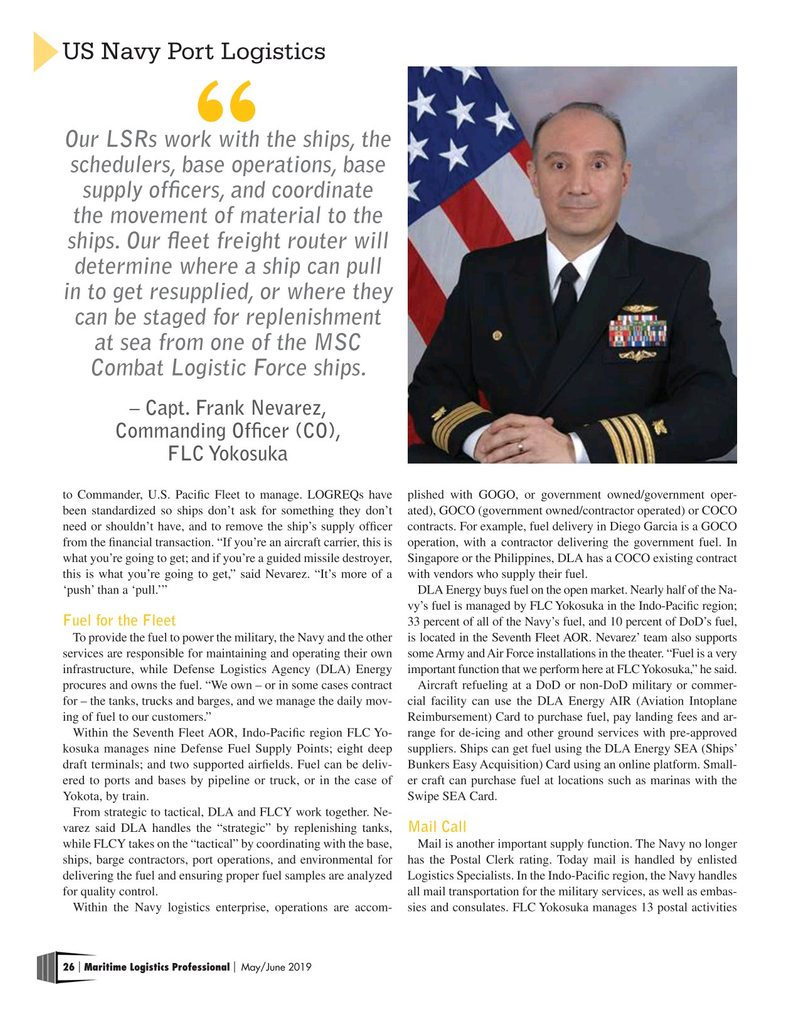 Our LSRs work with the ships, the schedulers, base operations, base supply offcers, and coordinate “ the movement of material to the ships. Our feet freight router will determine where a ship can pull in to get resupplied, or where they can be staged for replenishment at sea from one of the MSC

FLC Yokosuka to Commander, U.S. Paci?c Fleet to manage. LOGREQs have plished with GOGO, or government owned/government oper- been standardized so ships don’t ask for something they don’t ated), GOCO (government owned/contractor operated) or COCO need or shouldn’t have, and to remove the ship’s supply of?cer contracts. For example, fuel delivery in Diego Garcia is a GOCO from the ?nancial transaction. “If you’re an aircraft carrier, this is operation, with a contractor delivering the government fuel. In what you’re going to get; and if you’re a guided missile destroyer, Singapore or the Philippines, DLA has a COCO existing contract this is what you’re going to get,” said Nevarez. “It’s more of a with vendors who supply their fuel.

‘push’ than a ‘pull.’” DLA Energy buys fuel on the open market. Nearly half of the Na- vy’s fuel is managed by FLC Yokosuka in the Indo-Paci?c region; 33 percent of all of the Navy’s fuel, and 10 percent of DoD’s fuel,

Fuel for the Fleet

To provide the fuel to power the military, the Navy and the other is located in the Seventh Fleet AOR. Nevarez’ team also supports services are responsible for maintaining and operating their own some Army and Air Force installations in the theater. “Fuel is a very infrastructure, while Defense Logistics Agency (DLA) Energy important function that we perform here at FLC Yokosuka,” he said.

procures and owns the fuel. “We own – or in some cases contract Aircraft refueling at a DoD or non-DoD military or commer- for – the tanks, trucks and barges, and we manage the daily mov- cial facility can use the DLA Energy AIR (Aviation Intoplane ing of fuel to our customers.” Reimbursement) Card to purchase fuel, pay landing fees and ar-

Within the Seventh Fleet AOR, Indo-Paci?c region FLC Yo- range for de-icing and other ground services with pre-approved kosuka manages nine Defense Fuel Supply Points; eight deep suppliers. Ships can get fuel using the DLA Energy SEA (Ships’ draft terminals; and two supported air?elds. Fuel can be deliv- Bunkers Easy Acquisition) Card using an online platform. Small- ered to ports and bases by pipeline or truck, or in the case of er craft can purchase fuel at locations such as marinas with the

From strategic to tactical, DLA and FLCY work together. Ne- varez said DLA handles the “strategic” by replenishing tanks,

Mail Call while FLCY takes on the “tactical” by coordinating with the base, Mail is another important supply function. The Navy no longer ships, barge contractors, port operations, and environmental for has the Postal Clerk rating. Today mail is handled by enlisted delivering the fuel and ensuring proper fuel samples are analyzed Logistics Specialists. In the Indo-Paci?c region, the Navy handles for quality control. all mail transportation for the military services, as well as embas-