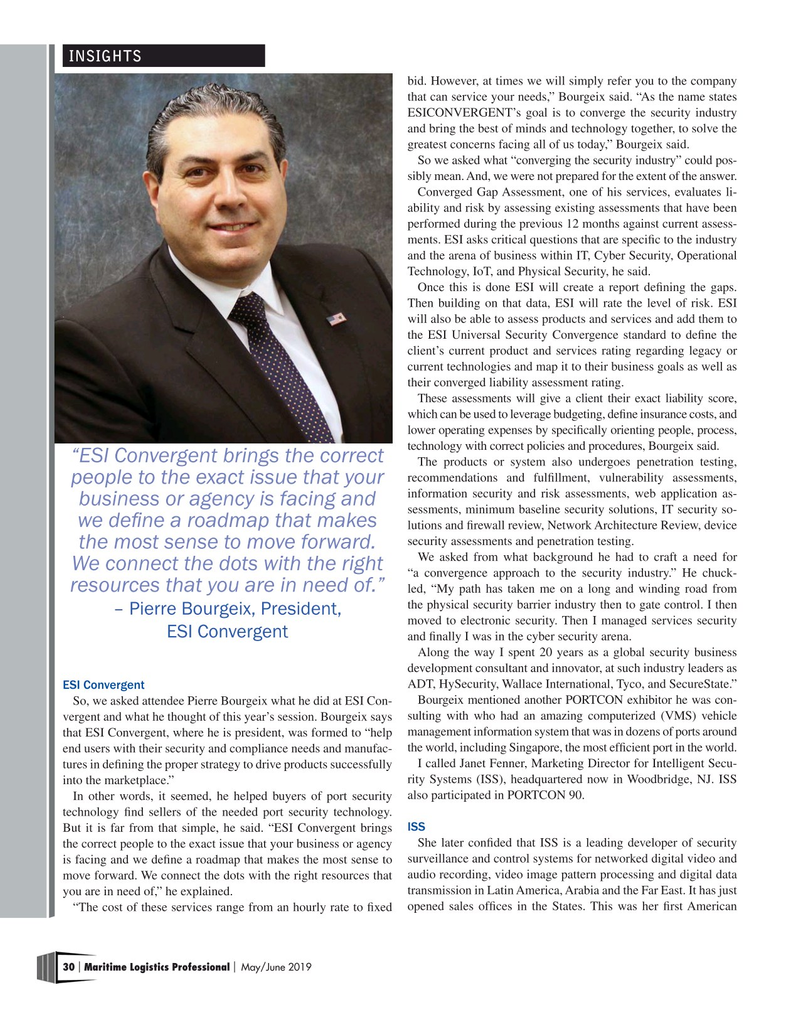 INSIGHTS bid. However, at times we will simply refer you to the company that can service your needs,” Bourgeix said. “As the name states

ESICONVERGENT’s goal is to converge the security industry and bring the best of minds and technology together, to solve the greatest concerns facing all of us today,” Bourgeix said.

So we asked what “converging the security industry” could pos- sibly mean. And, we were not prepared for the extent of the answer.

Converged Gap Assessment, one of his services, evaluates li- ability and risk by assessing existing assessments that have been performed during the previous 12 months against current assess- ments. ESI asks critical questions that are speci?c to the industry and the arena of business within IT, Cyber Security, Operational

Once this is done ESI will create a report de?ning the gaps.

Then building on that data, ESI will rate the level of risk. ESI will also be able to assess products and services and add them to the ESI Universal Security Convergence standard to de?ne the client’s current product and services rating regarding legacy or current technologies and map it to their business goals as well as their converged liability assessment rating.

These assessments will give a client their exact liability score, which can be used to leverage budgeting, de?ne insurance costs, and lower operating expenses by speci?cally orienting people, process, technology with correct policies and procedures, Bourgeix said.

The products or system also undergoes penetration testing, recommendations and ful?llment, vulnerability assessments, people to the exact issue that your information security and risk assessments, web application as- business or agency is facing and sessments, minimum baseline security solutions, IT security so-

We connect the dots with the right “a convergence approach to the security industry.” He chuck-

UHVRXUFHVWKDW\RXDUHLQQHHGRIµ led, “My path has taken me on a long and winding road from the physical security barrier industry then to gate control. I then – Pierre Bourgeix, President, moved to electronic security. Then I managed services security

ESI Convergent and ?nally I was in the cyber security arena.

Along the way I spent 20 years as a global security business development consultant and innovator, at such industry leaders as

So, we asked attendee Pierre Bourgeix what he did at ESI Con- Bourgeix mentioned another PORTCON exhibitor he was con- vergent and what he thought of this year’s session. Bourgeix says sulting with who had an amazing computerized (VMS) vehicle that ESI Convergent, where he is president, was formed to “help management information system that was in dozens of ports around end users with their security and compliance needs and manufac- the world, including Singapore, the most ef?cient port in the world.

But it is far from that simple, he said. “ESI Convergent brings ISS the correct people to the exact issue that your business or agency She later con?ded that ISS is a leading developer of security is facing and we de?ne a roadmap that makes the most sense to surveillance and control systems for networked digital video and move forward. We connect the dots with the right resources that audio recording, video image pattern processing and digital data you are in need of,” he explained. transmission in Latin America, Arabia and the Far East. It has just “The cost of these services range from an hourly rate to ?xed opened sales of?ces in the States. This was her ?rst American 30 Maritime Logistics Professional May/June 2019 | |