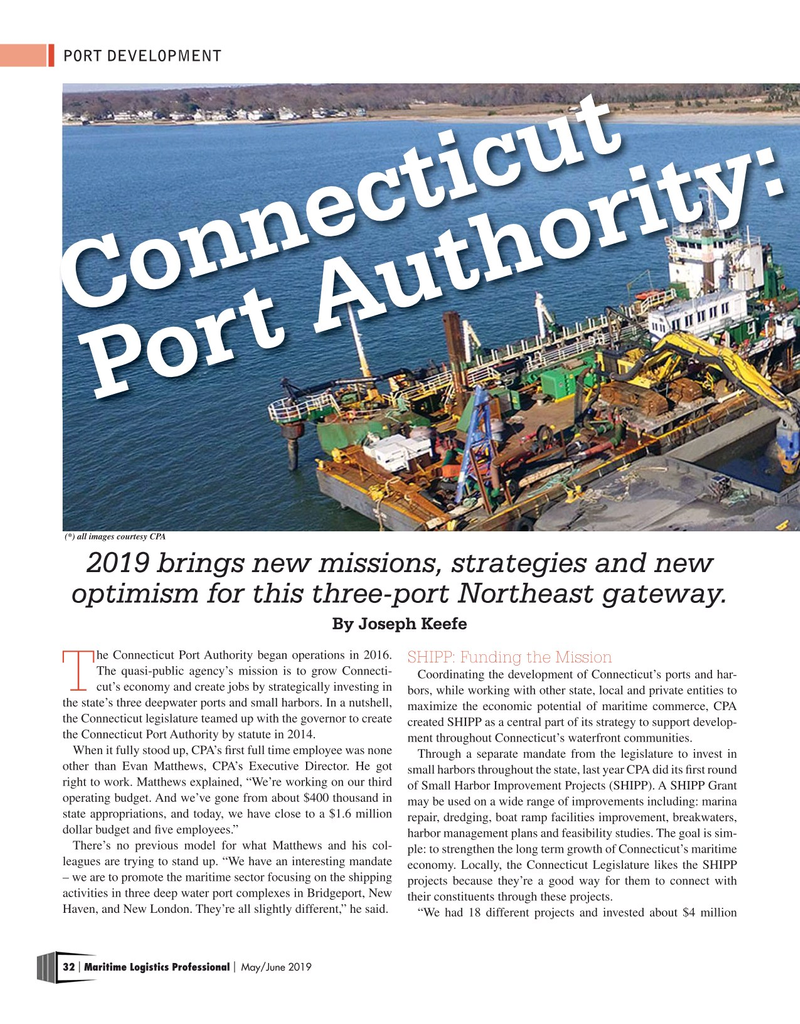 By Joseph Keefe he Connecticut Port Authority began operations in 2016.

The quasi-public agency’s mission is to grow Connecti-

Coordinating the development of Connecticut’s ports and har- cut’s economy and create jobs by strategically investing in bors, while working with other state, local and private entities to

T the state’s three deepwater ports and small harbors. In a nutshell, maximize the economic potential of maritime commerce, CPA the Connecticut legislature teamed up with the governor to create created SHIPP as a central part of its strategy to support develop- the Connecticut Port Authority by statute in 2014.

When it fully stood up, CPA’s ?rst full time employee was none

Through a separate mandate from the legislature to invest in other than Evan Matthews, CPA’s Executive Director. He got small harbors throughout the state, last year CPA did its ?rst round right to work. Matthews explained, “We’re working on our third of Small Harbor Improvement Projects (SHIPP). A SHIPP Grant operating budget. And we’ve gone from about $400 thousand in may be used on a wide range of improvements including: marina state appropriations, and today, we have close to a $1.6 million repair, dredging, boat ramp facilities improvement, breakwaters, dollar budget and ?ve employees.” harbor management plans and feasibility studies. The goal is sim-

There’s no previous model for what Matthews and his col- ple: to strengthen the long term growth of Connecticut’s maritime leagues are trying to stand up. “We have an interesting mandate economy. Locally, the Connecticut Legislature likes the SHIPP – we are to promote the maritime sector focusing on the shipping projects because they’re a good way for them to connect with activities in three deep water port complexes in Bridgeport, New their constituents through these projects.

Haven, and New London. They’re all slightly different,” he said.