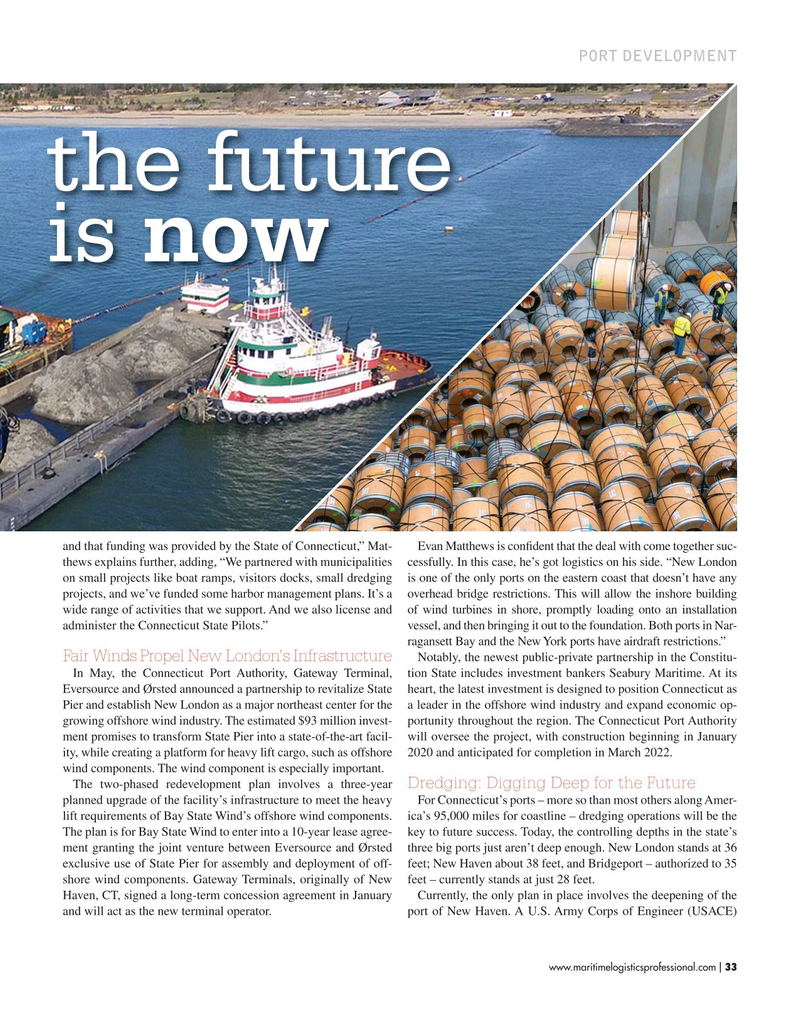 PORT DEVELOPMENT the future is now and that funding was provided by the State of Connecticut,” Mat- Evan Matthews is con?dent that the deal with come together suc- thews explains further, adding, “We partnered with municipalities cessfully. In this case, he’s got logistics on his side. “New London on small projects like boat ramps, visitors docks, small dredging is one of the only ports on the eastern coast that doesn’t have any projects, and we’ve funded some harbor management plans. It’s a overhead bridge restrictions. This will allow the inshore building wide range of activities that we support. And we also license and of wind turbines in shore, promptly loading onto an installation administer the Connecticut State Pilots.” vessel, and then bringing it out to the foundation. Both ports in Nar- ragansett Bay and the New York ports have airdraft restrictions.”

Notably, the newest public-private partnership in the Constitu-

Eversource and Ørsted announced a partnership to revitalize State heart, the latest investment is designed to position Connecticut as

Pier and establish New London as a major northeast center for the a leader in the offshore wind industry and expand economic op- growing offshore wind industry. The estimated $93 million invest- portunity throughout the region. The Connecticut Port Authority ment promises to transform State Pier into a state-of-the-art facil- will oversee the project, with construction beginning in January ity, while creating a platform for heavy lift cargo, such as offshore 2020 and anticipated for completion in March 2022.

Dredging: Digging Deep for the Future planned upgrade of the facility’s infrastructure to meet the heavy For Connecticut’s ports – more so than most others along Amer- lift requirements of Bay State Wind’s offshore wind components. ica’s 95,000 miles for coastline – dredging operations will be the

The plan is for Bay State Wind to enter into a 10-year lease agree- key to future success. Today, the controlling depths in the state’s ment granting the joint venture between Eversource and Ørsted three big ports just aren’t deep enough. New London stands at 36 exclusive use of State Pier for assembly and deployment of off- feet; New Haven about 38 feet, and Bridgeport – authorized to 35 shore wind components. Gateway Terminals, originally of New feet – currently stands at just 28 feet.

Haven, CT, signed a long-term concession agreement in January Currently, the only plan in place involves the deepening of the and will act as the new terminal operator. port of New Haven. A U.S. Army Corps of Engineer (USACE) www.maritimelogisticsprofessional.com 33