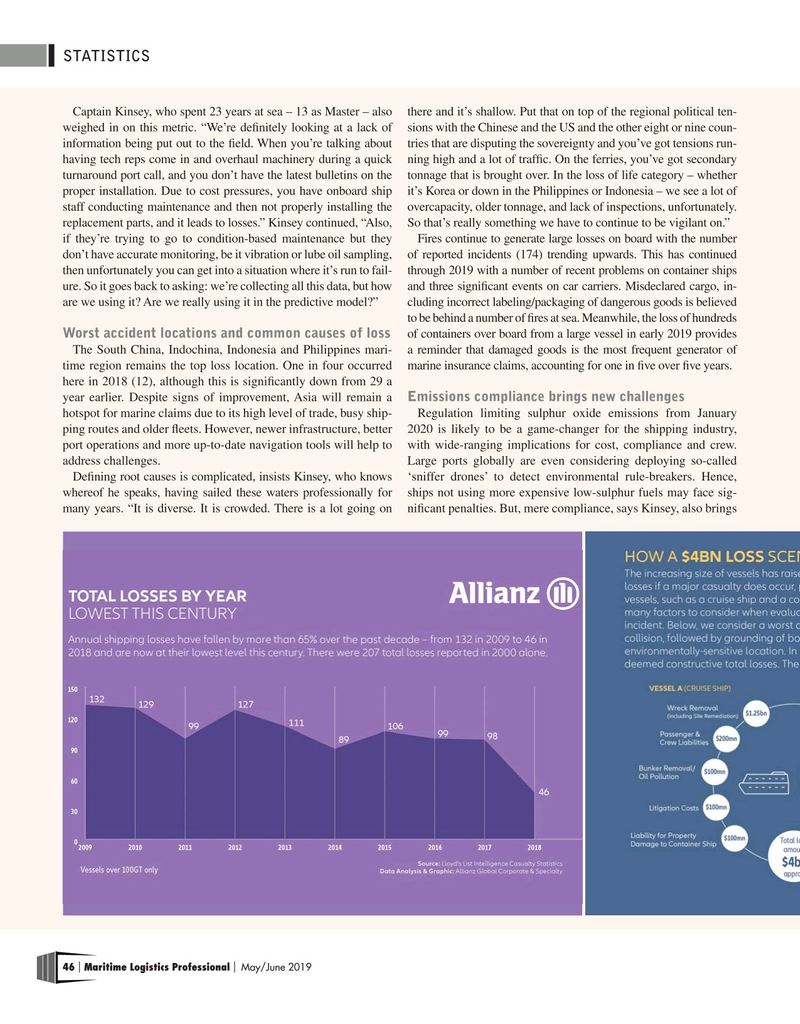 Captain Kinsey, who spent 23 years at sea – 13 as Master – also there and it’s shallow. Put that on top of the regional political ten- weighed in on this metric. “We’re de?nitely looking at a lack of sions with the Chinese and the US and the other eight or nine coun- information being put out to the ?eld. When you’re talking about tries that are disputing the sovereignty and you’ve got tensions run- having tech reps come in and overhaul machinery during a quick ning high and a lot of traf?c. On the ferries, you’ve got secondary turnaround port call, and you don’t have the latest bulletins on the tonnage that is brought over. In the loss of life category – whether proper installation. Due to cost pressures, you have onboard ship it’s Korea or down in the Philippines or Indonesia – we see a lot of staff conducting maintenance and then not properly installing the overcapacity, older tonnage, and lack of inspections, unfortunately. replacement parts, and it leads to losses.” Kinsey continued, “Also, So that’s really something we have to continue to be vigilant on.” if they’re trying to go to condition-based maintenance but they Fires continue to generate large losses on board with the number don’t have accurate monitoring, be it vibration or lube oil sampling, of reported incidents (174) trending upwards. This has continued then unfortunately you can get into a situation where it’s run to fail- through 2019 with a number of recent problems on container ships ure. So it goes back to asking: we’re collecting all this data, but how and three signi?cant events on car carriers. Misdeclared cargo, in- are we using it? Are we really using it in the predictive model?” cluding incorrect labeling/packaging of dangerous goods is believed to be behind a number of ?res at sea. Meanwhile, the loss of hundreds of containers over board from a large vessel in early 2019 provides

The South China, Indochina, Indonesia and Philippines mari- a reminder that damaged goods is the most frequent generator of time region remains the top loss location. One in four occurred marine insurance claims, accounting for one in ?ve over ?ve years.

here in 2018 (12), although this is signi?cantly down from 29 a year earlier. Despite signs of improvement, Asia will remain a

Emissions compliance brings new challenges hotspot for marine claims due to its high level of trade, busy ship- Regulation limiting sulphur oxide emissions from January ping routes and older ?eets. However, newer infrastructure, better 2020 is likely to be a game-changer for the shipping industry, port operations and more up-to-date navigation tools will help to with wide-ranging implications for cost, compliance and crew. address challenges. Large ports globally are even considering deploying so-called

De?ning root causes is complicated, insists Kinsey, who knows ‘sniffer drones’ to detect environmental rule-breakers. Hence, whereof he speaks, having sailed these waters professionally for ships not using more expensive low-sulphur fuels may face sig- many years. “It is diverse. It is crowded. There is a lot going on ni?cant penalties. But, mere compliance, says Kinsey, also brings 46 Maritime Logistics Professional May/June 2019 | |