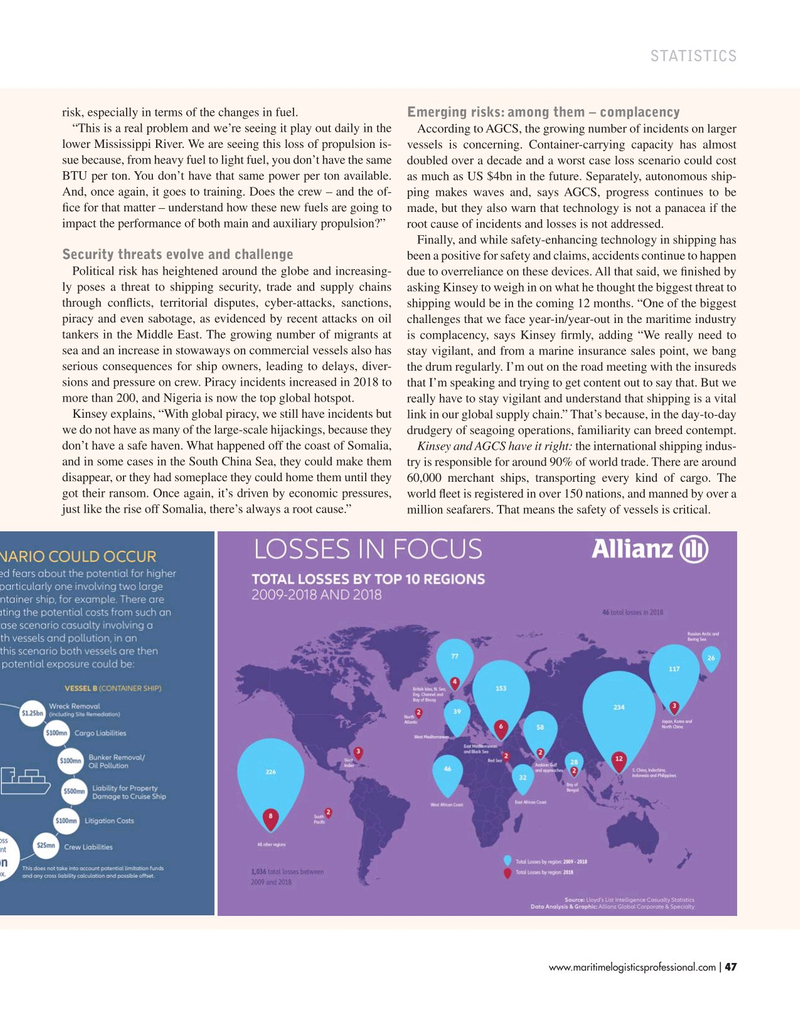 STATISTICS risk, especially in terms of the changes in fuel.

Emerging risks: among them – complacency “This is a real problem and we’re seeing it play out daily in the According to AGCS, the growing number of incidents on larger lower Mississippi River. We are seeing this loss of propulsion is- vessels is concerning. Container-carrying capacity has almost sue because, from heavy fuel to light fuel, you don’t have the same doubled over a decade and a worst case loss scenario could cost

BTU per ton. You don’t have that same power per ton available. as much as US $4bn in the future. Separately, autonomous ship-

And, once again, it goes to training. Does the crew – and the of- ping makes waves and, says AGCS, progress continues to be ?ce for that matter – understand how these new fuels are going to made, but they also warn that technology is not a panacea if the impact the performance of both main and auxiliary propulsion?” root cause of incidents and losses is not addressed.

Finally, and while safety-enhancing technology in shipping has

Security threats evolve and challenge been a positive for safety and claims, accidents continue to happen

Political risk has heightened around the globe and increasing- due to overreliance on these devices. All that said, we ?nished by ly poses a threat to shipping security, trade and supply chains asking Kinsey to weigh in on what he thought the biggest threat to through con?icts, territorial disputes, cyber-attacks, sanctions, shipping would be in the coming 12 months. “One of the biggest piracy and even sabotage, as evidenced by recent attacks on oil challenges that we face year-in/year-out in the maritime industry tankers in the Middle East. The growing number of migrants at is complacency, says Kinsey ?rmly, adding “We really need to sea and an increase in stowaways on commercial vessels also has stay vigilant, and from a marine insurance sales point, we bang serious consequences for ship owners, leading to delays, diver- the drum regularly. I’m out on the road meeting with the insureds sions and pressure on crew. Piracy incidents increased in 2018 to that I’m speaking and trying to get content out to say that. But we more than 200, and Nigeria is now the top global hotspot. really have to stay vigilant and understand that shipping is a vital

Kinsey explains, “With global piracy, we still have incidents but link in our global supply chain.” That’s because, in the day-to-day we do not have as many of the large-scale hijackings, because they drudgery of seagoing operations, familiarity can breed contempt.

don’t have a safe haven. What happened off the coast of Somalia, +INSEY