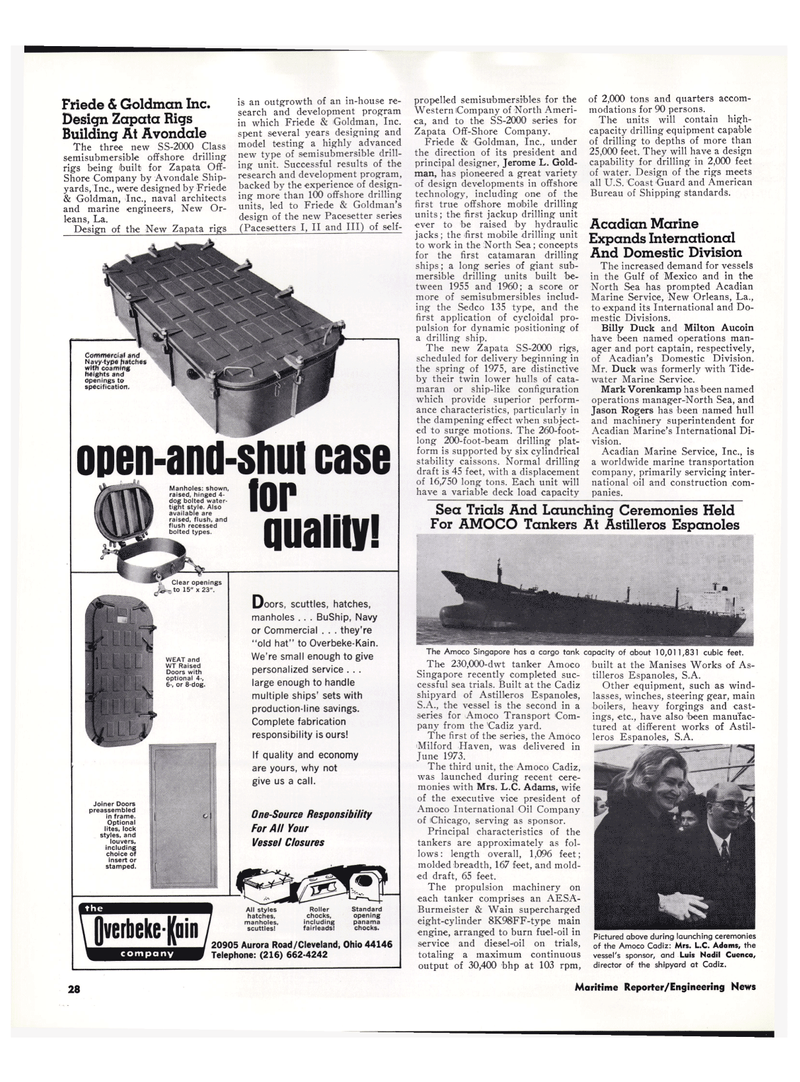 Design of the New Zapata rigs is an outgrowth of an in-house re- search and development program in which Friede & Goldman, Inc. spent several years designing and model testing a highly advanced new type of semisubmersible drill- ing unit. Successful results of the research and development program, backed by the experience of design- ing more than 100 offshore drilling units, led to Friede & Goldman's design of the new Pacesetter series (Pacesetters I, II and III) of self-

Navy-typG hatches with coaming heights and

Openings to specification. the Hfl All styles hatches, manholes, scuttles!

Western Company of North Ameri- ca, and to the SS-2000 series for

The new Zapata SS-2000 rigs, scheduled for delivery beginning in the spring of 1975, are distinctive by their twin lower hulls of cata- maran or ship-like configuration which provide superior perform- ance characteristics, particularly in the dampening effect when subject- ed to surge motions. The 260-foot- long 200-foot-beam drilling plat- form is supported by six cylindrical stability caissons. Normal drilling draft is 45 feet, with a displacement of 16,750 long tons. Each unit will have a variable deck load capacity of 2,000 tons and quarters accom- modations for 90 persons.

The units will contain high- capacity drilling equipment capable of drilling to depths of more than 25,000 feet. They will have a design capability for drilling in 2,000 feet of water. Design of the rigs meets all U.S. Coast Guard and American

Marine Service, New Orleans, La., to expand its International and Do- mestic Divisions.

Mark Vorenkamp has been named operations manager-North Sea, and

Jason Rogers has been named hull and machinery superintendent for

Complete fabrication responsibility is ours!

If quality and economy are yours, why not give us a call.

For AMOCO Tankers At Astilleros Espanoles

The Amoco Singapore has a cargo tank

S.A., the vessel is the second in a series for Amoco Transport Com- pany from the Gadiz yard.

The first of the series, the Amoco

Milford Haven, was delivered in

The third unit, the Amoco Cadiz, was launched during recent cere- monies with Mrs. L.C. Adams, wife of the executive vice president of

The propulsion machinery on each tanker comprises an AESA-

Burmeister & Wain supercharged eight-cylinder 8K98FF-type main engine, arranged to burn fuel-oil in service and dieseLoil on trials, totaling a maximum continuous output of 30,400 bhp at 103 rpm, capacity of about 10,011,831 cubic feet, built at the Manises Works of As- tilleros Espanoles, S.A.

Pictured above during launching ceremonies of the Amoco Cadiz: Mrs. L.C. Adams, the vessel's sponsor, and Luis Nadil Cuenca, director of the shipyard at Cadiz.

Optional lites, lock styles, and louvers, including choice of insert or stamped. open-and-