Curtis Bay Towing Company has announced two promotions to its executive staff. Effective January 1, 1980, Malcolm W. MacLeod, executive vice president, has been elected president and chief executive officer of the firm. He succeeds Capt. Frank J. Hughes who has served in that position since 1966, and has been elected chairman of the board.

Both men have long been associated with the maritime industry, each having commenced his career as a cadet at the Massachusetts Maritime Academy.

Mr. Hughes, with 47 years in the maritime field, spent many years at sea during which he served as an officer on dry cargo ships and tankers, and master of salvage tugs and deepsea tugs before coming ashore in a management capacity.

Mr. MacLeod, with 29 years' experience, served for a number of years as an officer on fleet tugs of the U.S. Navy and on commercial tugs operating on and f r om the U.S.

Curtis Bay Towing Company, founded 70 years ago, is headquartered in Baltimore, Md., and operates modern tug fleets based in the ports of Bhiladelphia, Pa., Baltimore, and Norfolk, Va., from which it provides harbor, inland, coastwise and ocean towing services. 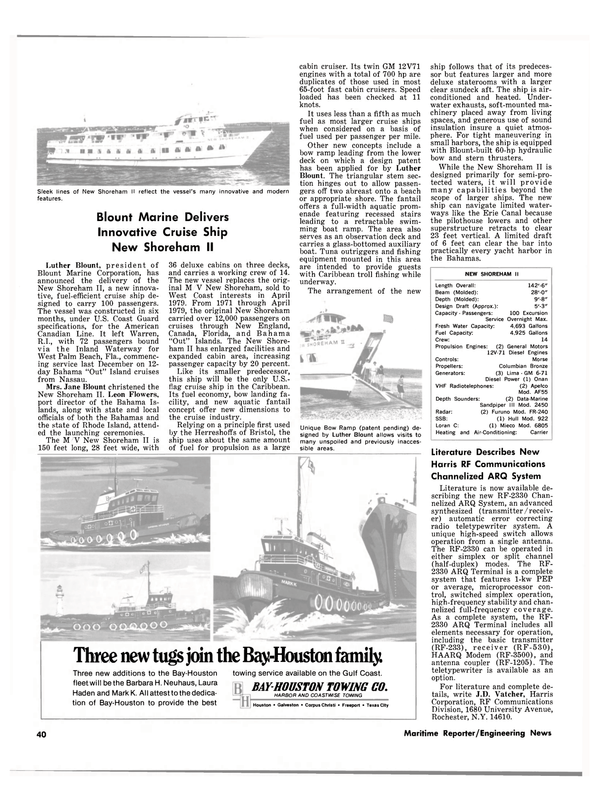