The El Rey (shown above), the final in a series of four mammoth triple-deck barges, was built in Portland, Ore., by the Marine and Rail Equipment Division of the FMC Corporation. After being launched from FMC's ways, the El Rey was towed from Portland through the Panama Canal to join Crowley's Trailer Marine Transport fleet operating in the Caribbean. Upon arrival in Puerto Rico, christening ceremonies for the barge were held on January 24 at the TMT Isla Grande Terminal in San Juan. The wife of the Governor of Puerto Rico, Kate Donnelly de Romero, christened the El Rey.

Collar, James B. Rettig, and J. Alec Merriam, members of the Crowley Management Committee, arrived in San Juan on January 21 for a week of activities in commemoration of Crowley Maritime Corporation's 10 years and TMT's 26 years of service to Puerto Rico. The 580-foot by 105-foot by 57-foot vessel joins three identical triple-deck barges in TMT's roll-on/roll-off trailer service between the U.S. Mainland and the Caribbean.

The El Rey and its sister vessels, La Reina, EI Conquistador, and La Princesa, are the largest ro/ro barges in the world. Each carries up to 374 forty- and forty-five-foot trailers. Triple-deck loading ramps at both Jacksonville and San Juan permit the mammoth vessels to be completely unloaded and reloaded in as little as eight hours. They are towed by modern 9,000-hp oceangoing tugboats. 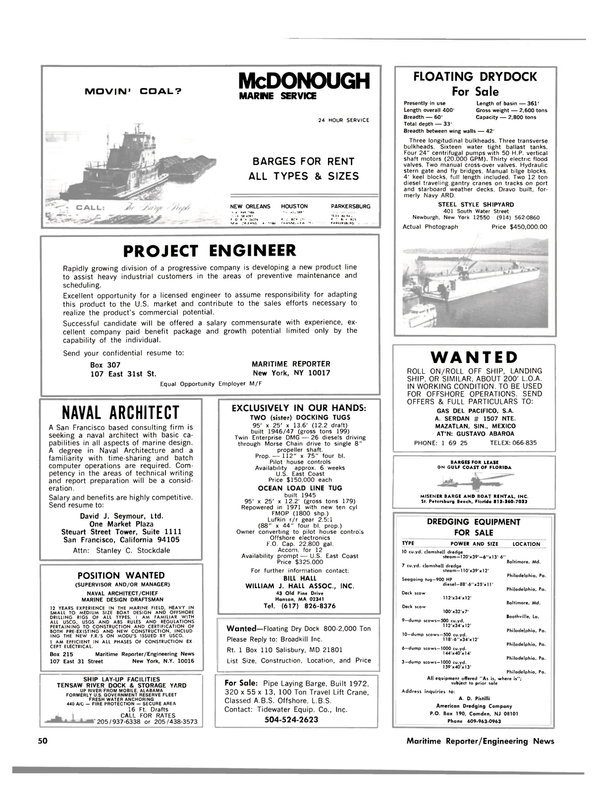