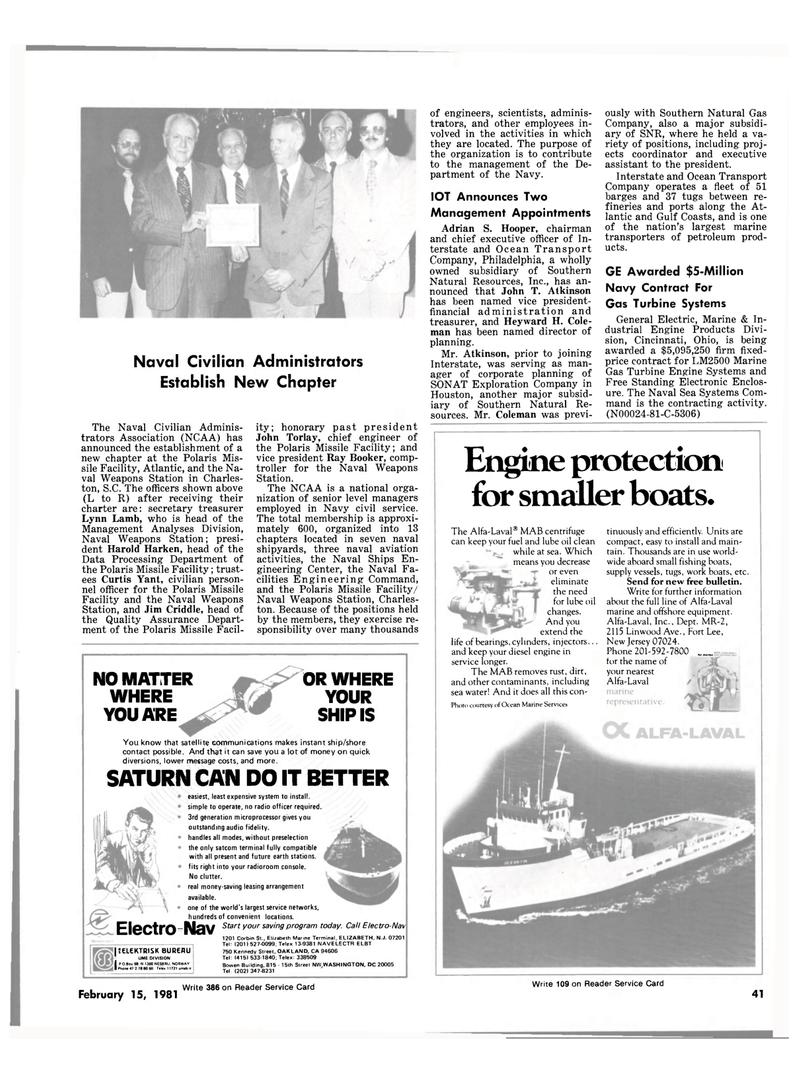 The Naval Civilian Adminis- trators Association (NCAA) has announced the establishment of a new chapter at the Polaris Mis- sile Facility, Atlantic, and the Na- val Weapons Station in Charles- ton, S.C. The officers shown above (L to R) after receiving their charter are: secretary treasurer

Lynn Lamb, who is head of the

Facility and the Naval Weapons

Station, and Jim Criddle, head of the Quality Assurance Depart- ment of the Polaris Missile Facil-

You know that satellite communications makes instant ship/shore contact possible. And that it can save you a lot of money on quick diversions, lower message costs, and more. SATURN CAN DO IT BETTER easiest, least expensive system to install, simple to operate, no radio officer required. 3rd generation microprocessor gives you outstanding audio fidelity, handles all modes, without preselection the only satcom terminal fully compatible with all present and future earth stations, fits right into your radioroom console.

I Phone 47 2 78 80 60 teW. 11721 umeb n of engineers, scientists, adminis- trators, and other employees in- volved in the activities in which they are located. The purpose of the organization is to contribute to the management of the De- partment of the Navy.

Natural Resources, Inc., has an- nounced that John T. Atkinson has been named vice president- financial administration and treasurer, and Heyward H. Cole- man has been named director of planning.

Mr. Atkinson, prior to joining

Interstate, was serving as man- ager of corporate planning of

Company, also a major subsidi- ary of SNR, where he held a va- riety of positions, including proj- ects coordinator and executive assistant to the president.

Company operates a fleet of 51 barges and 37 tugs between re- fineries and ports along the At- lantic and Gulf Coasts, and is one of the nation's largest marine transporters of petroleum prod- ucts.

The NCAA is a national orga- nization of senior level managers employed in Navy civil service.

Naval Weapons Station, Charles- ton. Because of the positions held by the members, they exercise re- sponsibility over many thousands

The Alfa-Laval® MAB centrifuge can keep your fuel and lube oil clean while at sea. Which means you decrease or even eliminate the need for lube oil changes.

And you extend the life of bearings, cylinders, injectors... and keep your diesel engine in service longer.

The MAB removes rust, dirt, and other contaminants, including sea water! And it does all this con-

Write for further information about the full line of Alfa-Laval marine and offshore equipment.