Bergeron Industries, Inc. has announced the delivery of the barge David B (shown above) to DBC C o r p o r a t i o n of America, Houston. Constructed at Bergeron's Braithwaite, La., marine facility, the David B, reportedly the largest inland service tank barge ever built, measures 370 by 54 by 12 feet and is equipped with a dual cargo pumping system and steam coils.

It is a double-skin vessel, classed by the American Bureau of Shipping, and possesses a loadline for limited offshore service. The U.S.

Coast Guard has c e r t i f i e d the barge as a Type II hull under Subchapter 0 for carriage of chemicals and other Grade A and lower flammable cargoes. Its eight cargo tanks have a total capacity of 40,313 barrels, and it can carry about 4,300 tons of cargo at a 9-foot draft. The David B is now in service transporting petroleum products between Mobile, Ala., and Vulcan Asphalt Refinery in Cordova, Ala.

The company has general offices at St. Bernard, La., and marine facilities at Braithwaite on the Misissippi River, near the Port of New Orleans, and at Port Beinville, Miss. 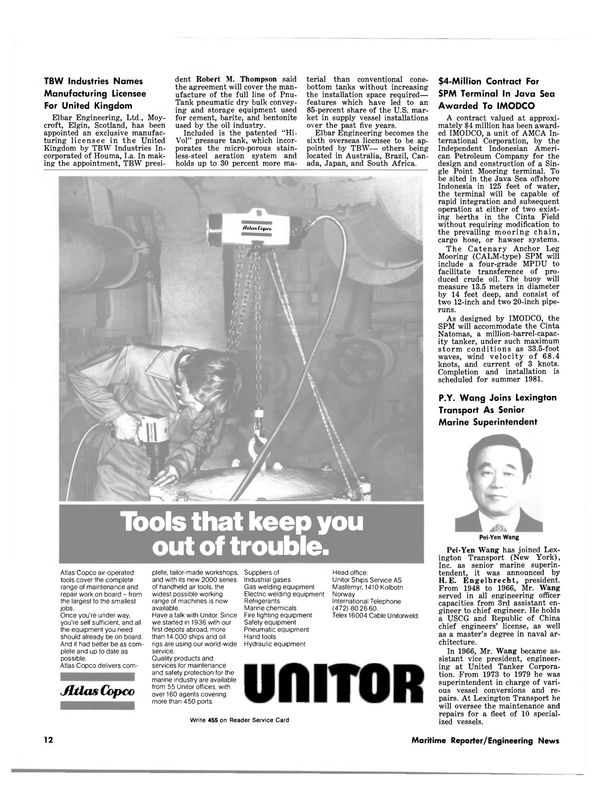 Read ON THE COVER in Pdf, Flash or Html5 edition of March 15, 1981 Maritime Reporter