A paper entitled "Chemical Waste Incinerator Ships — The Interagency Program to Develop a Capability in the United States" was presented at a recent Chesapeake Section of SNAME meeting held at the Washington Navy Yard Officer's Club. The paper's authors were Daniel Leubecker and Lissa Martinez of the Maritime A d m i n i s t r a t i o n ; Gerald Chapman and Donald Oberacker of the Environmental Protection Agency; Rosalie Matthews of the National Bureau of Standards, and Fritz Wybenga of the Coast Guard.

John Nachtsheim, president of the Society, delivered an introductory statement for the panel of authors, stressing the need for such vessels. Mr. Nachtsheim had been a contributing member of the interagency work group.

The authors noted that the U.S. currently confronts a serious and massive hazardous materials disposal problem. It is estimated that tens of millions of tons of contracts for 79 offshore units, followed by Japan with 33, Singapore with 29, France with 12, South Korea with nine and Canada with eight.

The authors detailed the organization, r e s p o n s i b i l i t i e s , and areas of concern of an interagency ad hoc work group that studied at-sea incineration. The principal agencies were the Environmental Protection Agency, MarAd, the U.S. Coast Guard, and the National Bureau of Standards.

The alternatives available to the Federal Government, as defined by the ad hoc group, for encouraging the design, construction, and operation of a U.S.-flag incinerator vessel were also described by the authors.

The paper illustrated the work of each agency, as well as described vessel design considerations and the projected need for, and type of waterfront facilities. 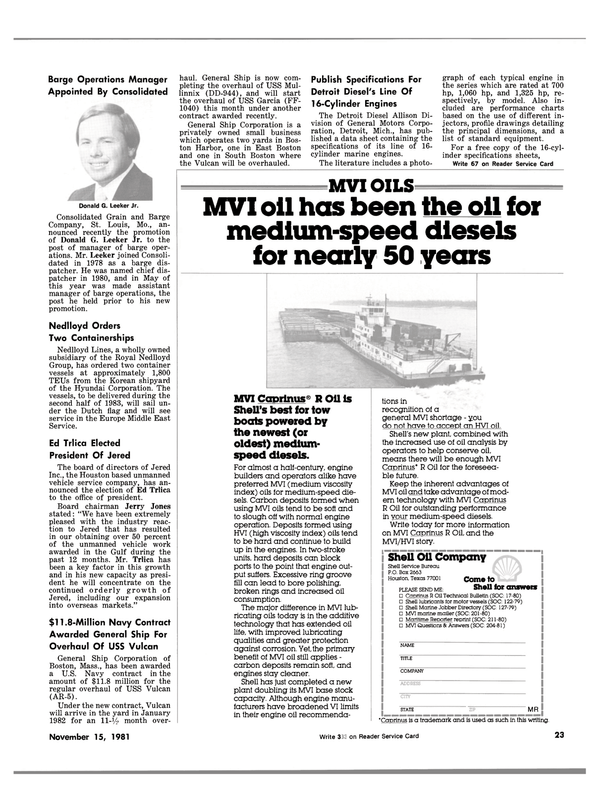