Indonesia To Use Jetfoil In Naval, Commercial Roles

A Boeing jetfoil to be evaluated in a variety of naval and commercial roles by the government of Indonesia was launched recently by Boeing Marine Systems in Renton, Wash.

Bima Samudera I, the first jetfoil fo r the Republic of Indonesia, will be evaluated in coastal defense and customs enforcement roles as well as offshore oil operations, ocean resource control, and commercial passenger transportation.

The high-speed hydrofoil will arrive in Indonesia in January 1982 to begin operation there in March. It will be operated by the Agency for the Development and Application of Technology, which is headed by the Minister of Research and Technology.

Adm. Waloejo Soegito, director of PT PAL, the Indonesian National Shipyard, represented the government at the ceremony. Value of the sale is approximately $13.7 million.

Although this jetfoil will be delivered in a commercial passenger configuration, the quick change capability of the vessel will enable Indonesian operators to easily change interior arrangements for use in other roles. Jetfoil seating can be conveniently removed and replaced by communication and navigation equipment necessary to perform a variety of patrol functions. The Bima Samudera I also has the additional fuel capacity of the patrol jetfoil.

The United Kingdom has already purchased a patrol configuration of the jetfoil which is now in fisheries protection service in the North Sea. The Royal Navy jetfoil, HMS Speedy, is equipped with diesel engines and extra fuel capacity to permit conventional hullborne operations of longer duration. Turbine propulsion enables dash speeds of over 50 knots when necessary.

Jetfoils are in commercial passenger service in Hong Kong, Japan, the Irish Sea, English Channel, and the Canary Islands.

Boeing Marine Systems has also delivered the first of five larger p a t r o l h y d r o f o i l missileships (PHMs) to the U.S. Navy. The PHMs are equipped with Harpoon missiles and a rapid-fire 76-mm cannon which, in combination with the speed, agility, and rough water performance of the ship, provide exceptional effectiveness in strike, patrol and surveillance missions. Designed for all-weather operations, PHM's fully submerged foil system permits the ship to operate in heavy seas with stability normally available only in much larger ships. 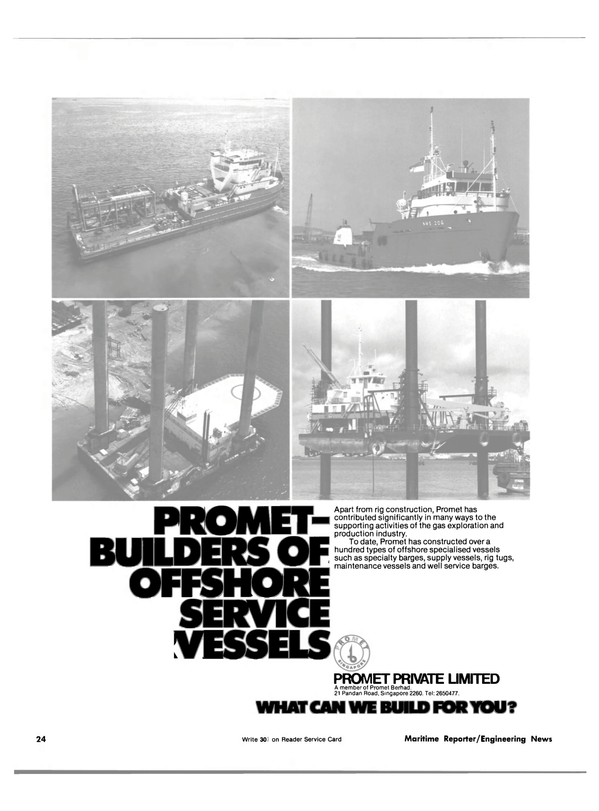 Read Indonesia To Use Jetfoil In Naval, Commercial Roles in Pdf, Flash or Html5 edition of November 15, 1981 Maritime Reporter