Joe Wise, president of Levingston Marine Corporation, based in Annapolis, Md., is appointed to the additional position of president of the newly formed company— Levingston International, A.G., which will be based in Zug, Switzerland.

Commenting on the formation of Levingston Trading Company, Mr. Paden said that Levingston's recent technology exchange programs with Ishikawajima-Harima Heavy Industries Co., Ltd., and its long association through licensing with Mitsui Engineering and Shipbuilding Company, Ltd., had illustrated the attractiveness of the trading company approach as practiced by the large Japanese engineering groups. Levingston Trading Company will initiate a similar approach through the activities of five existing Levingston Group companies—three marine equipment manufacturing companies, an equipment leasing company and a marine supply company.

With regard to the formation of Levingston International, Mr.

Paden said that for several years now Levingston has been supporting its overseas l i c e n s e es through the provision of engineering services and the procurement of U.S.-manufactured equipment and supplies. The establishment of a specialized organization is a logical development for the coordination of these overseas activities.

Mr. Paden also commented on the continued expansion of the Levingston Group's a c t i v i t i e s.

Revenues have grown at an annual rate in excess of 25 percent over the past five years and are expected to continue to grow at about this rate. In order to keep each of the Group's activities at a manageable level it was necessary to create additional companies within the Group. Levingston's activities will now be organized into four principal companies, all subsidiaries of Levingston Industries, Inc.: Levingston Shipbuilding Company, in Orange, Texas, which builds offshore rigs and commercial ships and is currently bidding on U.S. Navy shipbuilding contracts; Texas Gulfport Shipbuilding Company, in Port Arthur Arthur, Texas, which builds rigs and other offshore equipment and operates Levingston's ship repair facilities, with the largest existing fleet of drydocks on the Gulf Coast; Levingston Trading Company, in Orange, Texas, which will manage Levingston's activities in the development, production, sale, and leasing of marine equipment and supplies; and Levingston Marine Corporation, in Annapolis, Md., which provides naval architectural and marine engineering s e r v i c e s , including engineering support of six overseas shipbuilding companies that are currently licensed to build Levingston-designed drill rigs.

Mr. Paden went on to say that he expects Levingston to continue to grow in its traditional markets with orderly diversification into other marine-related activities. 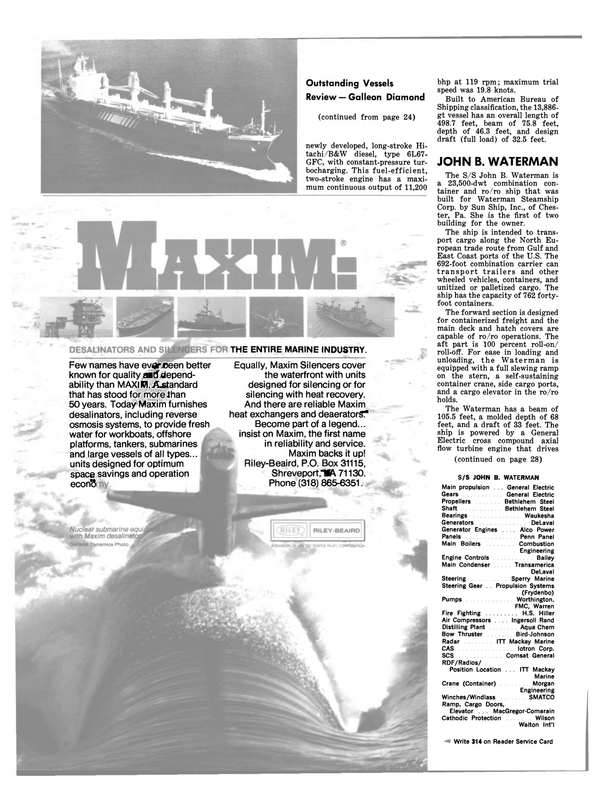