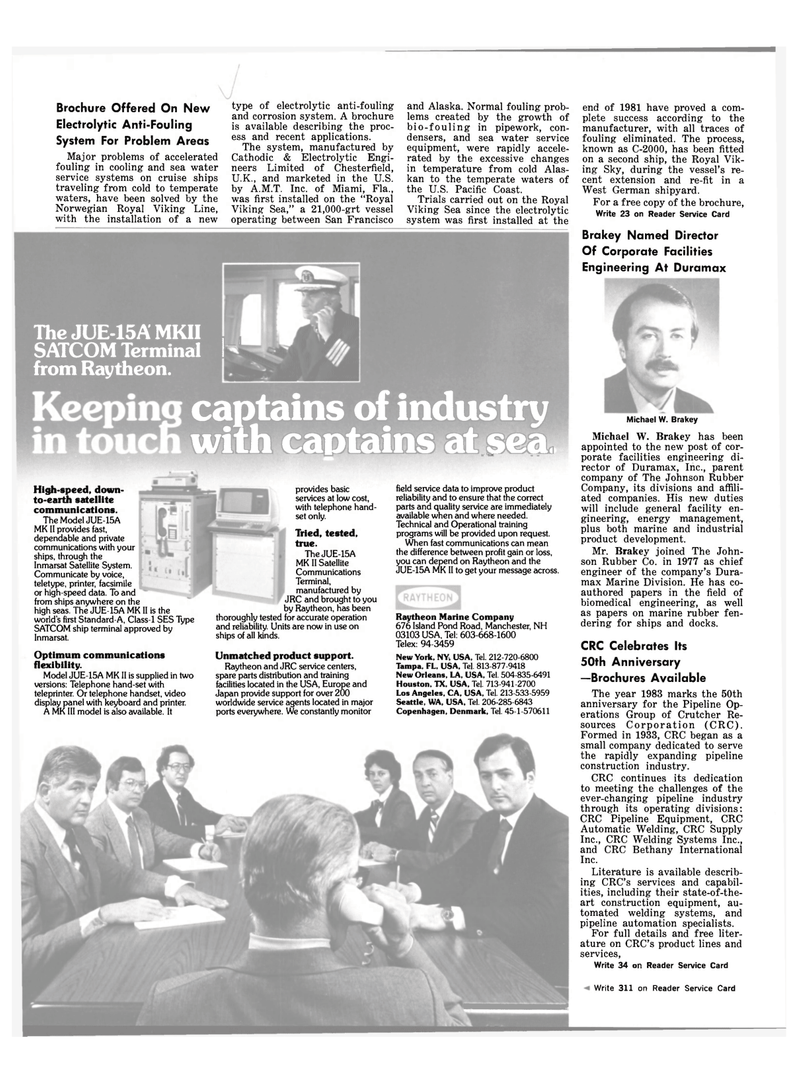 Major problems of accelerated fouling in cooling and sea water service systems on cruise ships traveling from cold to temperate waters, have been solved by the

Norwegian Royal Viking Line, with the installation of a new type of electrolytic anti-fouling and corrosion system. A brochure is available describing the proc- ess and recent applications.

The system, manufactured by

Viking Sea," a 21,000-grt vessel operating between San Francisco and Alaska. Normal fouling prob- lems created by the growth of bio-fouling in pipework, con- densers, and sea water service equipment, were rapidly accele- rated by the excessive changes in temperature from cold Alas- kan to the temperate waters of the U.S. Pacific Coast.

Trials carried out on the Royal

Viking Sea since the electrolytic system was first installed at the

SATCOM Terminal " from Raytheon. captains of industry with captains at sea.

MK II provides fast, dependable and private communications with your ships, through the

Communicate by voice, teletype, printer, facsimile or high-speed data. To and from ships anywhere on the high seas. The JUE-15A MK II is the world's first Standard-A, Class-1 SES Type

A MK III model is also available. It provides basic services at low cost, with telephone hand- set only.

JRC and brought to you by Raytheon, has been thoroughly tested for accurate operation and reliability. Units are now in use on ships of all kinds.

Japan provide support for over 200 worldwide service agents located in major ports everywhere. We constantly monitor field service data to improve product reliability and to ensure that the correct parts and quality service are immediately available when and where needed.

Technical and Operational training programs will be provided upon request.

When fast communications can mean the difference between profit gain or loss, you can depend on Raytheon and the

JUE-15A MK II to get your message across.

Copenhagen, Denmark, Tel. 45-1-570611 end of 1981 have proved a com- plete success according to the manufacturer, with all traces of fouling eliminated. The process, known as C-2000, has been fitted on a second ship, the Royal Vik- ing Sky, during the vessel's re- cent extension and re-fit in a

For a free copy of the brochure,

Michael W. Brakey has been appointed to the new post of cor- porate facilities engineering di- rector of Duramax, Inc., parent company of The Johnson Rubber

Company, its divisions and affili- ated companies. His new duties will include general facility en- gineering, energy management, plus both marine and industrial product development.

Mr. Brakey joined The John- son Rubber Co. in 1977 as chief engineer of the company's Dura- max Marine Division. He has co- authored papers in the field of biomedical engineering, as well as papers on marine rubber fen- dering for ships and docks.

The year 1983 marks the 50th anniversary for the Pipeline Op- erations Group of Crutcher Re- sources Corporation (CRC).

CRC continues its dedication to meeting the challenges of the ever-changing pipeline industry through its operating divisions:

For full details and free liter- ature on CRC's product lines and services,