Bay Shipbuilding Corporation in Sturgeon Bay, Wise., a subsidiary of The Manitowoc Company, recently converted a 150-foot jackup barge to an aids to navigation barge for the U.S. Coast Guard. The barge will be teamed with the USCG vessel Bristol Bay, a 140-foot icebreaking tug, to form the first Ninth Coast Guard District Aids to Navigation tug/ barge unit on the Great Lakes.

The NavAids tug/barge unit is part of a Ninth Coast Guard District two-year experimental project, the goal of which is to determine the feasibility of servicing buoys with such a unit. The tug/barge concept offers the potential for significant savings in maintaining the aids to navigation system on the Great Lakes.

In a ceremony to commemorate the completion of this unique project, Mrs. John F. Schermond Jr. broke a bottle of Door County wine across the bow of the barge.

She is the wife of John F. Schermond Jr., the Bay Ship contracts manager in charge of the project.

Bay Ship handled all facets of the conversion. Modifications to the barge included removal of the six jackup spuds and conversions of spud wells to ballast and fuel tanks.

The sides of the barge were strengthened to handle buoys, and the bow was strengthened for operations in the ice.

A Schottel bow thruster capable of being operated from either the barge or the tug was installed to aid maneuverability. Machinery spaces were built underdeck to house the electrical and hydraulic equipment used to power the vessel's five deck winches, anchor system, and buoyhandling equipment. A 10-ton Alaska Marine hydraulic crane was installed.

This crane, designed especially to work aids to navigation, has 70-foot extendable boom and a three-ton auxilliary hoist. 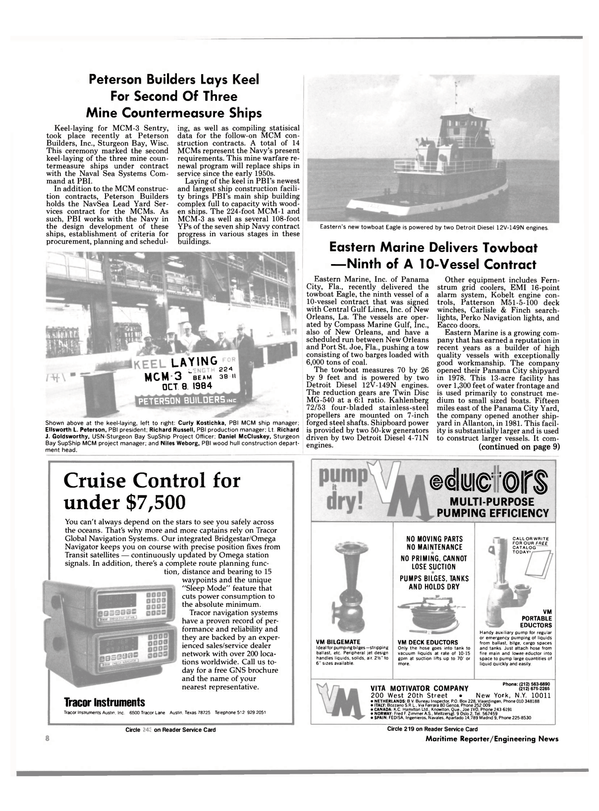