A recent meeting of the New York Metropolitan Section of The Society of Naval Architects and Marine Engineers was held at the American Bureau of Shipping Building, a new location for the Section's meetings.

A paper titled "Criteria for Capacity Certification of Drydocks and Significance of Classification and U.S.

Extremely expensive and sensitive warships, as well as valuable merchant ships, are being handled in a wide variety of drydocks, Mr.

Crandall said, many of them not originally built for modern vessels and often operated by personnel with very rudimentary training and experience and with limited engineering back-up. Only since 1973 has Lloyd's Register of Shipping published rules for steel floating drydocks, and the American Bureau of Shipping rules were created only recently.

Following the example of the Fifth Naval District, the Naval Sea Systems Command in Washington started the MIL-STD-1625 code using very limited personnel and funds to prepare a drydock certification program to attempt to insure ship safety in all docks.

The honored guest at the meeting was Alvin E. Cox. He retired from J.J. Henry Co., Inc. as a vice president, and has been an active member of SNAME for more than 40 years. 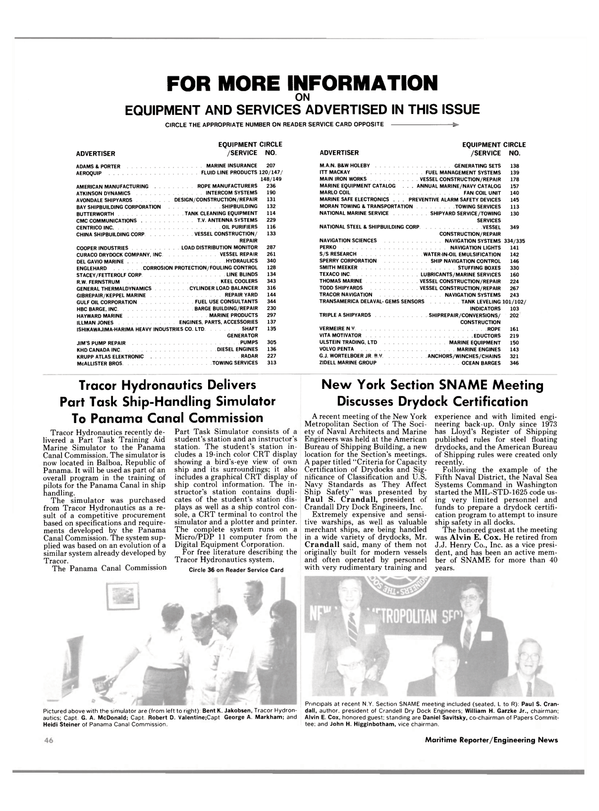