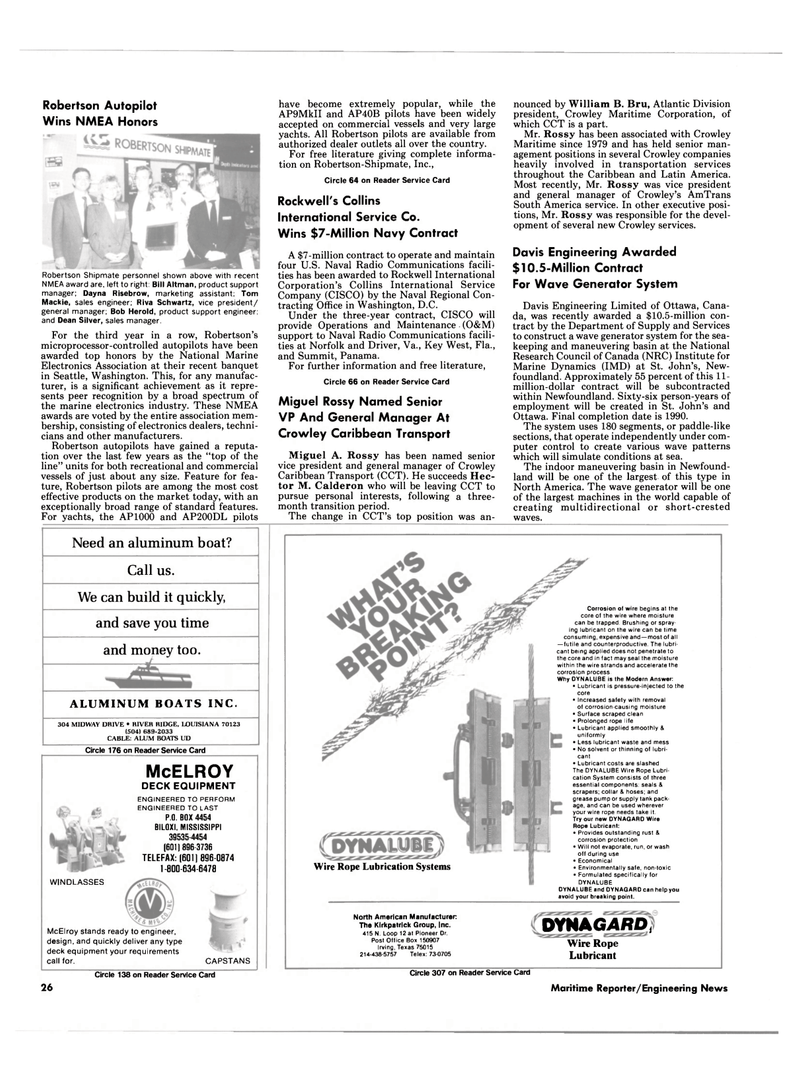 For the third year in a row, Robertson's microprocessor-controlled autopilots have been awarded top honors by the National Marine

Electronics Association at their recent banquet in Seattle, Washington. This, for any manufac- turer, is a significant achievement as it repre- sents peer recognition by a broad spectrum of the marine electronics industry. These NMEA awards are voted by the entire association mem- bership, consisting of electronics dealers, techni- cians and other manufacturers.

Robertson autopilots have gained a reputa- tion over the last few years as the "top of the line" units for both recreational and commercial vessels of just about any size. Feature for fea- ture, Robertson pilots are among the most cost effective products on the market today, with an exceptionally broad range of standard features.

For yachts, the AP1000 and AP200DL pilots have become extremely popular, while the

AP9MkII and AP40B pilots have been widely accepted on commercial vessels and very large yachts. All Robertson pilots are available from authorized dealer outlets all over the country.

A $7-million contract to operate and maintain four U.S. Naval Radio Communications facili- ties has been awarded to Rockwell International

For further information and free literature,

VP And General Manager At

Miguel A. Rossy has been named senior vice president and general manager of Crowley

The change in CCT's top position was an- nounced by William B. Bru, Atlantic Division president, Crowley Maritime Corporation, of which CCT is a part.

Mr. Rossy has been associated with Crowley

Maritime since 1979 and has held senior man- agement positions in several Crowley companies heavily involved in transportation services throughout the Caribbean and Latin America.

Most recently, Mr. Rossy was vice president and general manager of Crowley's AmTrans

Davis Engineering Limited of Ottawa, Cana- da, was recently awarded a $10.5-million con- tract by the Department of Supply and Services to construct a wave generator system for the sea- keeping and maneuvering basin at the National

Marine Dynamics (IMD) at St. John's, New- foundland. Approximately 55 percent of this 11- million-dollar contract will be subcontracted within Newfoundland. Sixty-six person-years of employment will be created in St. John's and

The system uses 180 segments, or paddle-like sections, that operate independently under com- puter control to create various wave patterns which will simulate conditions at sea.

North America. The wave generator will be one of the largest machines in the world capable of creating multidirectional or short-crested waves.

We can build it quickly, and save you time and money too.

Corrosion of wire begins at the core of the wire where moisture can be trapped. Brushing or spray- ing lubricant on the wire can be time consuming, expensive and—most of all — futile and counterproductive. The lubri- cant being applied does not penetrate to the core and in fact may seal the moisture within the wire strands and accelerate the corrosion process.

Rope Lubricant: • Provides outstanding rust & corrosion protection • Will not evaporate, run, or wash off during use • Economical • Environmentally safe, non-toxic • Formulated specifically for

DYNALUBE and DYNAGARD can help you avoid your breaking point.