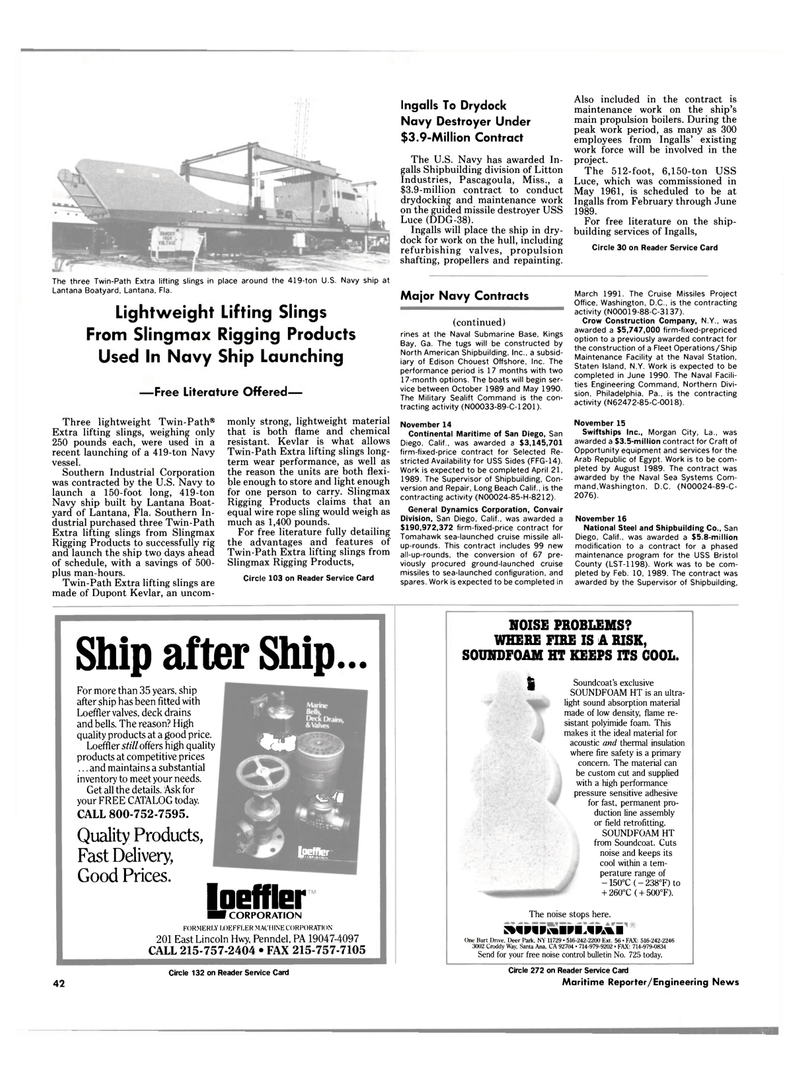 The three Twin-Path Extra lifting slings in place around the 419-ton U.S. Navy ship at

Extra lifting slings, weighing only 250 pounds each, were used in a recent launching of a 419-ton Navy vessel.

Southern Industrial Corporation was contracted by the U.S. Navy to launch a 150-foot long, 419-ton

Rigging Products to successfully rig and launch the ship two days ahead of schedule, with a savings of 500- plus man-hours.

Twin-Path Extra lifting slings are made of Dupont Kevlar, an uncom-

The U.S. Navy has awarded In- galls Shipbuilding division of Litton

Ingalls will place the ship in dry- dock for work on the hull, including refurbishing valves, propulsion shafting, propellers and repainting.

Also included in the contract is maintenance work on the ship's main propulsion boilers. During the peak work period, as many as 300 employees from Ingalls' existing work force will be involved in the project.

Luce, which was commissioned in

Ingalls from February through June 1989.

For free literature on the ship- building services of Ingalls,

Circle 30 on Reader Service Card monly strong, lightweight material that is both flame and chemical resistant. Kevlar is what allows

Twin-Path Extra lifting slings long- term wear performance, as well as the reason the units are both flexi- ble enough to store and light enough for one person to carry. Slingmax

Rigging Products claims that an equal wire rope sling would weigh as much as 1,400 pounds.

For free literature fully detailing the advantages and features of

Bay, Ga. The tugs will be constructed by

North American Shipbuilding, Inc., a subsid- iary of Edison Chouest Offshore, Inc. The performance period is 17 months with two 17-month options. The boats will begin ser- vice between October 1989 and May 1990.

Diego, Calif., was awarded a $3,145,701 firm-fixed-price contract for Selected Re- stricted Availability for USS Sides (FFG-14).

Crow Construction Company, N.Y., was awarded a $5,747,000 firm-fixed-prepriced option to a previously awarded contract for the construction of a Fleet Operations/Ship

Maintenance Facility at the Naval Station,

Swiftships Inc., Morgan City, La., was awarded a $3.5-million contract for Craft of

Opportunity equipment and services for the

Diego, Calif., was awarded a $5.8-million modification to a contract for a phased maintenance program for the USS Bristol

For more than 35 years, ship after ship has been fitted with

Get all the details. Ask for your FREE CATALOG today.

WHERE FIRE IS A RISK,

S0UNDF0AM HT KEEPS ITS COOL. i Soundcoat's exclusive SOUNDFOAM HT is an ultra- light sound absorption material made of low density, flame re- sistant polyimide foam. This makes it the ideal material for acoustic and thermal insulation where fire safety is a primary concern. The material can be custom cut and supplied with a high performance pressure sensitive adhesive for fast, permanent pro- duction line assembly or field retrofitting.

Send for your free noise control bulletin No. 725 today. 42