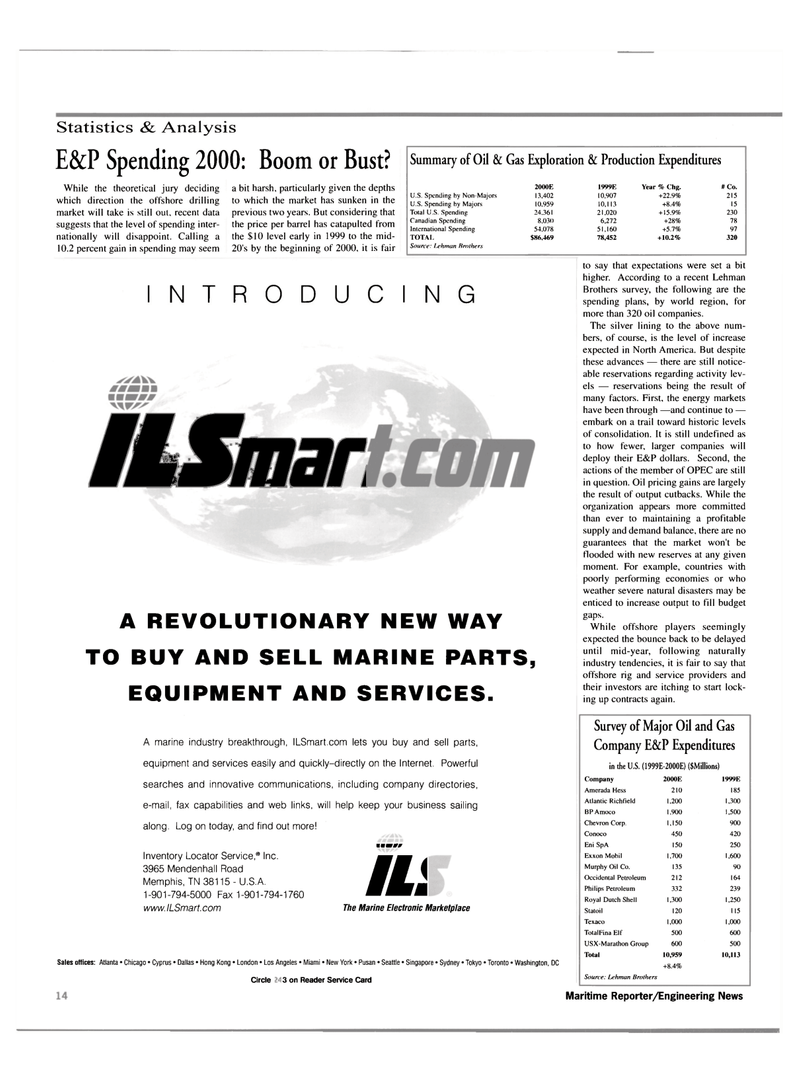 While the theoretical jury deciding which direction the offshore drilling market will take is still out, recent data suggests that the level of spending inter- nationally will disappoint. Calling a 10.2 percent gain in spending may seem a bit harsh, particularly given the depths to which the market has sunken in the previous two years. But considering that the price per barrel has catapulted from the $10 level early in 1999 to the mid- 20's by the beginning of 2000, it is fair

TO BUY AND SELL MARINE PARTS,

A marine industry breakthrough, ILSmart.com lets you buy and sell parts, equipment and services easily and quickly-directly on the Internet. Powerful searches and innovative communications, including company directories, e-mail, fax capabilities and web links, will help keep your business sailing along. Log on today, and find out more!

Circle 317 on Reader Service Card to say that expectations were set a bit higher. According to a recent Lehman

Brothers survey, the following are the spending plans, by world region, for more than 320 oil companies.

The silver lining to the above num- bers, of course, is the level of increase expected in North America. But despite these advances — there are still notice- able reservations regarding activity lev- els — reservations being the result of many factors. First, the energy markets have been through —and continue to — embark on a trail toward historic levels of consolidation. It is still undefined as to how fewer, larger companies will deploy their E&P dollars. Second, the actions of the member of OPEC are still in question. Oil pricing gains are largely the result of output cutbacks. While the organization appears more committed than ever to maintaining a profitable supply and demand balance, there are no guarantees that the market won't be

Hooded with new reserves at any given moment. For example, countries with poorly performing economies or who weather severe natural disasters may be enticed to increase output to fill budget gaps.

While offshore players seemingly expected the bounce back to be delayed until mid-year, following naturally industry tendencies, it is fair to say that offshore rig and service providers and their investors are itching to start lock- ing up contracts again.

Survey of Major Oil and Gas