The dilemma facing the marine diesel engine manufactur- ing industry today is as complex as it has ever faced.

Through a forest of demands from shipowners and legisla- tors, diesel engine makers are being challenged to produce power plants, which perform to a broad spectrum of quali- ty levels, which are seemingly at odds with one another.

The demand for better reliability, lower fuel consumption and better NOx and SOx emission values are the industry norm. Now, engine makers are challenged to produce pow- erplants that significantly reduce Particulate Matter, or, K effectively, create little to no smoke. While all major engine manufacturers are individually addressing this prob- .

lem and producing solutions, MAN B&W recently unveiled its progress on the development of an invisible smoke engine, a top priority for all engine makers given the heightened environmental legislation which exists today. Starting with its L/V 48/60, MAN B&W has com- mitted significant effort and monetary resources to develop engines which operate with invisible smoke exhaust gas, thus allowing for cruising in environmentally sensitive regions with stringent environmental regulations. MAN B&W in 1998 introduced a smoke reduction package for cruise operators travelling in the Arctic Seas of Alaska, and was in effect the first step to the IS (invisible smoke) engine LA/ 48/60. IS engines are based on two engine-linked subsystems: Fuel Water Emulsification (FWE), that requires only a moderate amount of water; and Low-load, electrically driven auxiliary blower operating at only very low engine loads. This equipment is supplemented by a matched engine setting, with regard to special turbocharger specification, MAN B&W turbochargers featuring Jet-Assist, low-load bypass, soot suppressing injection and matched injection timing. The FWE avoids the need for a second injection system and its drawbacks, and helps to improve the opacity of smoke, particularly at low levels. Circle 54 on Reader Service Card 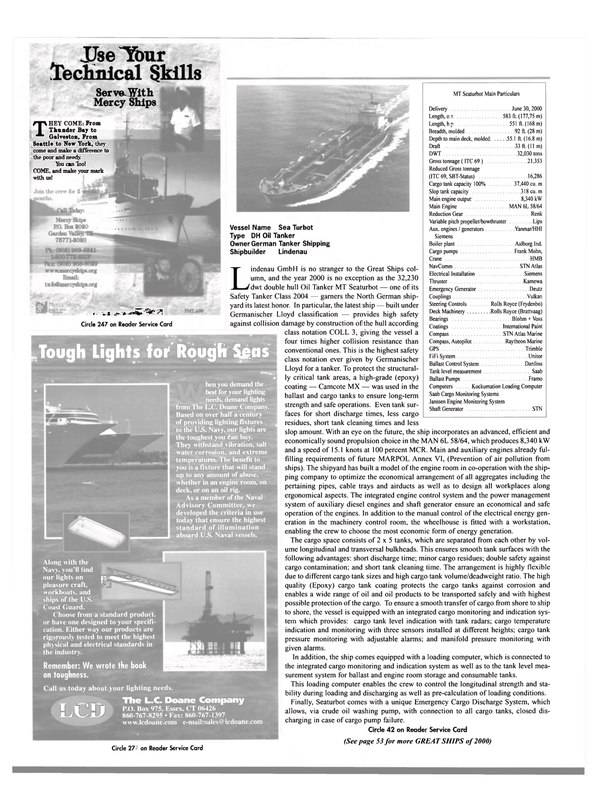