In an effort to utilize the now defunct U.S.

Lines cruise ships, Congress has recommended that the U.S. Navy purchase the vessels, for possible use as replacement Joint Command Ships.

The two 1,900-passenger vessels, which were to have been delivered in 2003, at a price of $440 million each, were on their way to becoming "an American dream." With the first vessel approximately 55 percent complete, the second vessel was about to have its keel laid.

And according to Northrop Grumman Litton Ingalls, the company who was to build these ships, more than 90 percent of material had already been committed. An added blow occurred a few days after AMCV had filed bankruptcy, when the yard announced that it would discontinue all work on the vessels, resulting from MarAd's decision to suspend its $60 million loan guarantee when it became 1 u i t e apparent t h a t A M C V h a d l i t t l e c h a n c e o f being able to provide the dollars for the con- struction of these vessels.

However, according to Randy Belote, N o r t h r o P Grumman's director of Corporate Public Affairs and International Public Rela- tions, every effort was being put forth by Northrop Grumman to keep the project moving Belote added that the yard has been in discussion with potential buyers for the vessels and is "currently taking a look at a variety of options regarding Project America." One option may be selling the ship pair to the U.S. Navy for use as new Joint Command or Joint Forces Command and Control ships. Currently, the Navy has four vessels of this type deployed in various waters. The ships, which typically can stand to run anywhere from 30 to 36 years are in dire need of being replaced as most were built in the 1970's.

The Navy, who has been conducting a study on determining the most efficient way of replacing these vessels with a new class of command ships, has expressed its interest to Northrop Grumman as possibly purchasing the U.S. Lines vessels for its JCC (X) program.

The vessels, which would have to be modified and reconfigured to U.S. Navy ramifications and standards would be used to replace the current Joint Command vessels, such as USS Blue Ridge, USS Coronado and USS LaSalle, performing joint command and joint control functions in forward areas.

According to the U.S. Navy, currently there are programmed funds available to acquire two such JCC (X) vessels — in 2004 and 2005, respectively.

"At this point we're considering all our options regarding the possibility of using the Project America ships," said Navy spokesperson, Lt. Bill Speaks. "We're taking into consideration an analysis of alternatives, as well as what their (the ships') capabilities might be." Speaks added that it was too early for him to discuss if the Navy would make a firm commitment with Northrop Grumman for the ships' purchase due to the premature nature of the Navy's "analysis of alternatives." Belote of Northrop Grumman agreed with the Navy in that it would be too soon to say that a deal between the two organizations has been firmly planted. "Ultimately this issue will be decided by both Congress and the Navy," Belote said. "I think, however though that the intent (the purchase of the ships) would be to look at this as a viable alternative for the Navy - the ships are still in the yard and we are continuing to discuss all our options with MarAd." — Regina P. Ciardiello 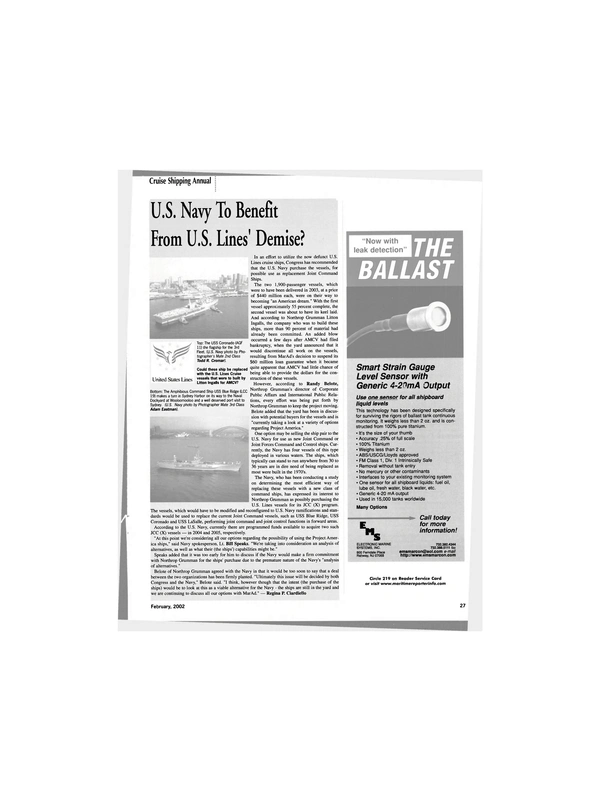