Innovation on the tanker front comes from many venues, and one of the latest — the Ecomax tanker design — is offered from the minds and experience of a pair of French companies, classification society Bureau Veritas and shipowner Services & Transport. The new Aframax tanker design is intended to address all the major causes of large oil spills, and features two independent engine rooms, power supply systems and steering gear, increased hull scantlings, reduced high tensile steel content, duplicated navigation equipment with off-track monitoring and full inerting of all ballast spaces.

"While smaller oil spills are getting less frequent.

the occurrence of large spills due to tanker accidents is remaining constant," says Philippe Anslot, technical director of Services & Transports.

"When we looked at the underlying causes of those spills we saw that the four main factors were machinery failure, navigation error, fire and explosion and hull damage. So we set out to design a tanker that would be much less likely to have an accident due to any of those factors. The Ecotanker is the result." The Ecotanker design is based initially on an Aframax vessel, but studies have also been done for larger and smaller vessels. Length is slightly increased over conventional aframaxes, but other dimensions remain much the same.

The possibility of machinery and systems failure is addressed by duplicating the engine rooms, stern tubes, propellers, steering gears and rudders.

In the event of breakdown of one power plant or system, the vessel will still be able to operate in complete safety, and make 12.5 knots as opposed to 16.5 knots with both slow speed diesels functioning.

Navigational failures are tackled by building in a high level of redundancy to the equipment, applying ergonomic techniques to the bridge layout and design, and by the installation of a newly-developed Automatic Navigation and Tracking System, which will warn of any off-track deviation. Fire and explosion risk is reduced by efficient and permanent inerting of all ballast and double hull spaces, using the Hellespont-developed Vent 2-D system, and by installation of double gas sampling systems in the ballast tanks adjacent to cargo spaces.

Hull failure is addressed through the reduction of the use of high tensile steel to 32 percent from a more typical 48 percent, a move that combined with increased attention to fatigue details, increased scantlings particular at main deck level, and coating all ballast tanks and sensitive areas of cargo tanks, is meant to make a more robust ship, capable of providing a lifetime of safe navigation.

Jean Francois Segretain, head of BV's development department, says, "Our new BV Rules 2000 are unique in giving tankers increased deck scantlings to take account of ultimate hull girder strength. Combined with the attention to fatigue and corrosion, and the detailed attention to making survey and inspection easier, built into this design, we have come up with a 40 year worldwide ship, much stronger than those being built today."Overall build cost is estimated to be 25 percent in excess of a standard Aframax tanker. 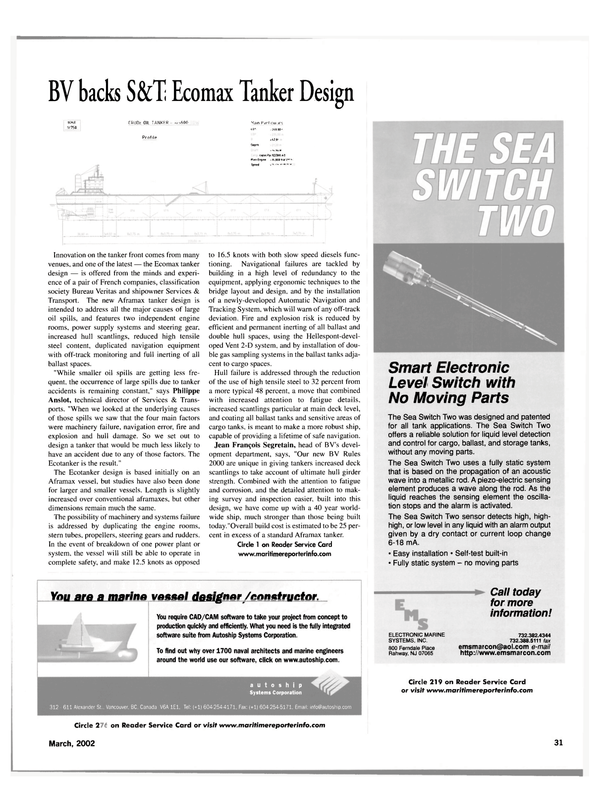