liquefied natural gas (LNG) carrier was launched on January 29 by IZAR's Sestao yard in Bilbao. The ship — standing in testament to the 1.213 workers at Sestao who physically made the ship a reality as well as the underlying strength of the IZAR company — is a highly significant one for many reasons, both technical and business.

The 933-ft. (284.4-m), 19.5 knot ship embodies the hopes of a shipbuilding nation that is seeking to reestablish its presence in the LNG niche that it has not occupied for more than three decades, as the production of gas ships generally lays in the hands of Far East builders today.

The ship is unique in many respects - not the least in that it was launched into the water, sliding down its building way in the traditional manner in the presence of thousands of guests, both local residents and VIPs from the shipping world. It is the first of the series of five (two to be built at Sestao, two to be built at Puerto Real, and the fifth still undecided) that takes advantage of the millions invested in updating the shipbuilding technology and capacity at Sestao. In the last two years, the shipyard in Sestao has received: new flow of fabrication; new curve-blocks lines; new light-blocks lines; new subassembly curve blocks lines; additional lifting capacity; and new warehouse building construction. IZAR.

according to company officials, wants to differentiate itself with technology, as it is the only way to be and stay ahead." "Decade of Gas" To say that competition for a slice of the gas transportation market has heated up is a vast understatement.

With the projection for increasing amounts of gas versus oil projects rising in the near and long-term, companies are jockeying for position to build and operate these high value ships. IZAR officials, in planning the deployment of the vast armada of shipbuilding facilities and capabilities available around Spain upon the consolidation of Astilleros Espanoles and Bazan into the current company, identified the coming future as "the decade of gas." The IZAR LNG ship is unique in many respects, but its signature is its longer, more slender hull, as compared to other vessels of this type and capacity. With a length of 933 ft. (284.3 m) and a breadth of 139 ft. (42.3 m), the vessel is designed to be more speed efficient compared to vessels from other makers, giving it a slightly higher speed with the need for less propulsion power. This, of course, translates to dollars saved.

IZAR. upon determining that the gas market would be central to its future shipbuilding plan, licensed the right to build all three major types of LNG gas transport systems; aluminum spheres, prismatic tanks, and membrane.

The Membrane NO 96 — GTT system was chosen, in part because it is the most common of all systems, with reliability heavily favored by the shipowner.

However, an added benefit was the fact that it is the membrane system that best allows the longer, more slender hull delivered by IZAR. Regardless of the method, the process of constructing these mammoth vessels' tanks is a time-consuming venture, as it will take a full 17 months for the vessel to be complete.Designed for a 40-year fatigue life (there is no high-tensile steel used in construction), the ship is truly the embodiment of international shipbuilding prowess, as IZAR forged deals and relationships around the globe to help bring the ships to fruition. The shipyard has forged ties with the following companies for these purposes: Name MHI (Mitsubishi Heavy Industries) Technology Propulsion Equipment supplier and engineering technical assistance for propulsion system.

While pricing information was not available, IZAR assures that, in looking at the complete lifecycle of the ship, pricing is competitive on the international marketplace.

In total, for the five ship series, there are two charterers, RYPF and U. Fenosa; and three shipowners, Naviera F.

Following is the delivery schedule: The yard currently has four additional "slots" open for ships of this size and type for deliveries in December 2004, July 2005, October 2005 and March 2006, and is aggressively trying to fill them.

Though it has been 32 years since Spain has built an LNG carrier, it is interesting to note that the last vessel delivered, Laieta, is still providing reliable service to RYPF on its Algiers to Barcelona route. 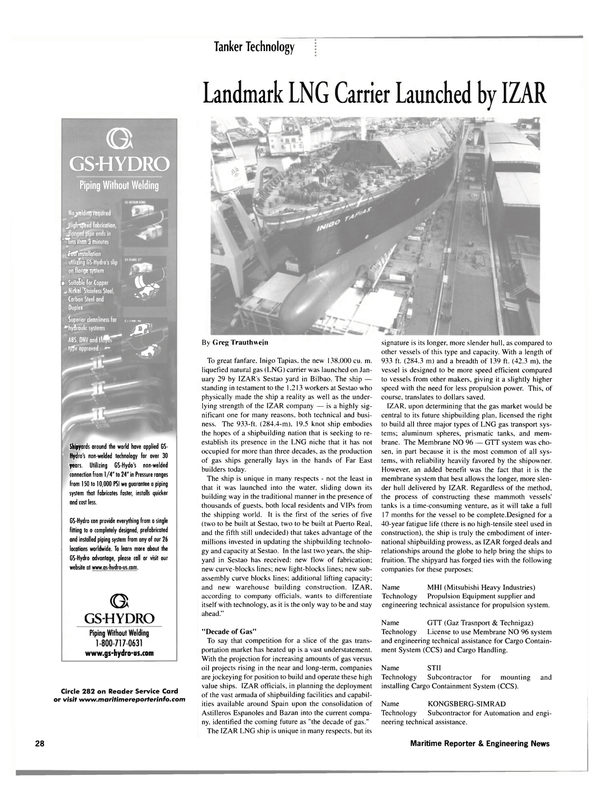