NSRP ASE sponsors a variety of R&D projects that address lean initiatives — some focusing on new construction and others on repair. One notable lean repair project that has demonstrated rapid payback and implementation involves the surface preparation process.

A November demonstration in Jacksonville showcased results to date of the project to U.S. shipyards as a means of quickly transferring this knowledge throughout the U.S. industry. The shipyard compared statistics from similar water blasting jobs on two sister warships, the USS Spruance (DD-963) and the USS Obannon (DD-987). The Spruance underwent interim dry-docking availability a year ago when the project was just getting underway, which resulted in some substantial man-hour overruns for the surface prep process.

"This project has had a significant impact on increasing our competitive position in the surface preparation process of military and commercial ship repair." said E d Fleming, president of Atlantic Dry Dock Corp. in Jacksonville.

"It has allowed Atlantic Dry Dock to compete with the more efficient dry blasting operations while reaping the environmental benefits of water blasting." Contributing to the overall success of the hull blasting and painting effort on Obannon was the "lean" detailed plan the workers followed to prepare, blast and paint continuously from bow to stern with minimal delays and interruptions.

Given the significance of surface preparation and coating in many interim docking schedules, these time reductions have the potential to directly reduce time in dock and thus return the warship asset to the deployment-ready status more quickiy.

Ergonomic improvements include a "Gun Rack" to support the blasting gun that takes the stress off the worker, and a "Crawler" that supports the worker in reclined positions and can be adjusted in many different angles. As part of the UHPWB project, Atlantic Marine is also tackling the environmental protection costs associated with surface preparation.

To reduce the cost of disposing of contaminated blasting water, the team assessed options and selected the Electro-Pulse System to remove "metals" which remain after primary cascade sedimentation has been accomplished. 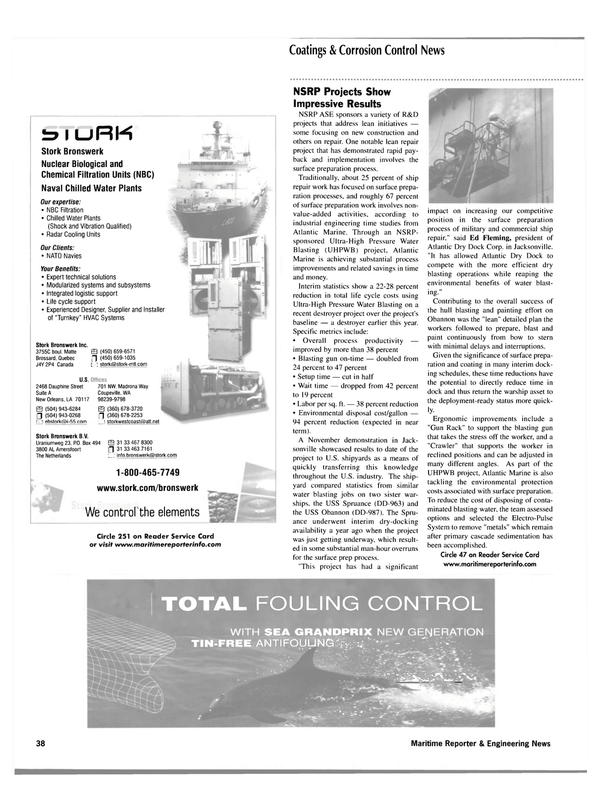