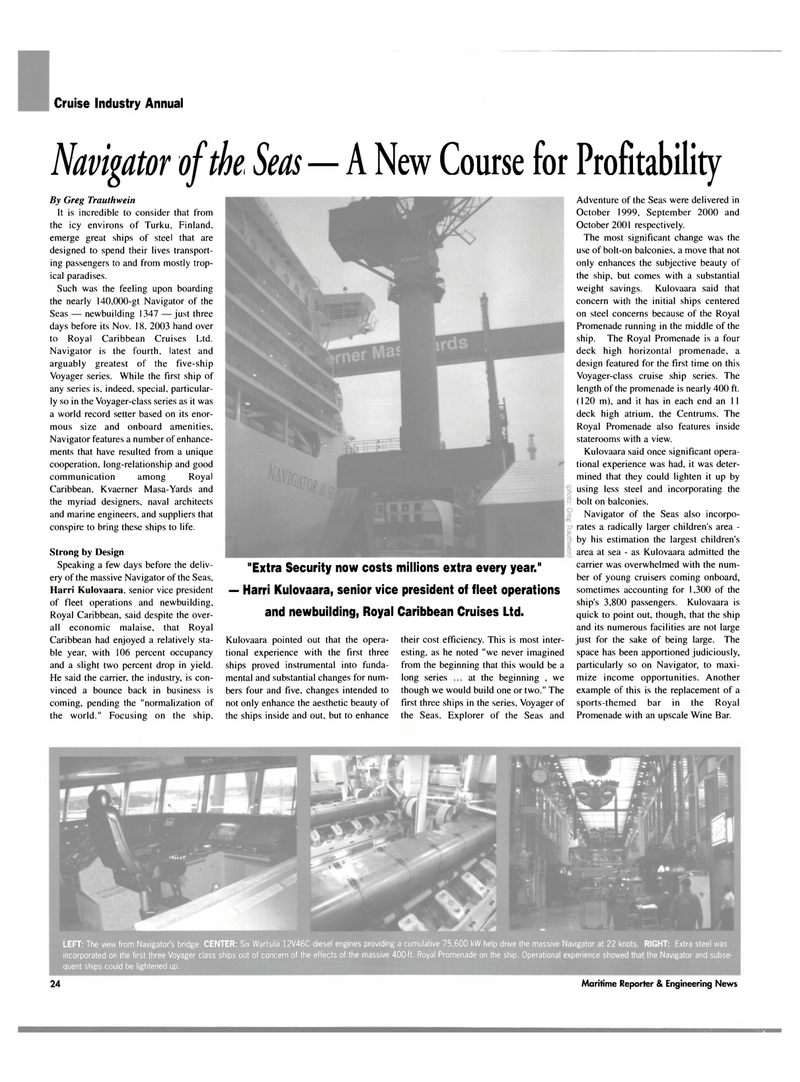 Navigator of the Seas—A New Course for Profitability

It is incredible to consider that from the icy environs of Turku, Finland, emerge great ships of steel that are designed to spend their lives transport- ing passengers to and from mostly trop- ical paradises.

Such was the feeling upon boarding the nearly 140,000-gt Navigator of the

Navigator is the fourth, latest and arguably greatest of the five-ship

Voyager series. While the first ship of any series is, indeed, special, particular- ly so in the Voyager-class series as it was a world record setter based on its enor- mous size and onboard amenities.

Navigator features a number of enhance- ments that have resulted from a unique cooperation, long-relationship and good communication among Royal

Caribbean, Kvaerner Masa-Yards and the myriad designers, naval architects and marine engineers, and suppliers that conspire to bring these ships to life.

Speaking a few days before the deliv- ery of the massive Navigator of the Seas,

Royal Caribbean, said despite the over- all economic malaise, that Royal

Caribbean had enjoyed a relatively sta- ble year, with 106 percent occupancy and a slight two percent drop in yield.

He said the carrier, the industry, is con- vinced a bounce back in business is coming, pending the "normalization of the world." Focusing on the ship. "Extra Security now costs millions extra every year." — Harri Kulovaara, senior vice president of fleet operations and newbuilding, Royal Caribbean Cruises Ltd.

Kulovaara pointed out that the opera- tional experience with the first three ships proved instrumental into funda- mental and substantial changes for num- bers four and five, changes intended to not only enhance the aesthetic beauty of the ships inside and out, but to enhance their cost efficiency. This is most inter- esting, as he noted "we never imagined from the beginning that this would be a long series ... at the beginning , we though we would build one or two." The first three ships in the series. Voyager of the Seas, Explorer of the Seas and

Adventure of the Seas were delivered in

The most significant change was the use of bolt-on balconies, a move that not only enhances the subjective beauty of the ship, but comes with a substantial weight savings. Kulovaara said that concern with the initial ships centered on steel concerns because of the Royal

Promenade running in the middle of the ship. The Royal Promenade is a four deck high horizontal promenade, a design featured for the first time on this

Voyager-class cruise ship series. The length of the promenade is nearly 400 ft. (120 m), and it has in each end an 11 deck high atrium, the Centrums. The

Royal Promenade also features inside staterooms with a view.

Kulovaara said once significant opera- tional experience was had, it was deter- mined that they could lighten it up by using less steel and incorporating the bolt on balconies.

Navigator of the Seas also incorpo- rates a radically larger children's area - by his estimation the largest children's area at sea - as Kulovaara admitted the carrier was overwhelmed with the num- ber of young cruisers coming onboard, sometimes accounting for 1,300 of the ship's 3,800 passengers. Kulovaara is quick to point out, though, that the ship and its numerous facilities are not large just for the sake of being large. The space has been apportioned judiciously, particularly so on Navigator, to maxi- mize income opportunities. Another example of this is the replacement of a sports-themed bar in the Royal

Promenade with an upscale Wine Bar.

LEFT: The view from Navigator's bridge. CENTER: Six Wartsila 12V46C diesel engines providing a cumulative 75,600 kW help drive the massive Navigator at 22 knots. RIGHT: Extra steel was incorporated on the first three Voyager class ships out of concern of the effects of the massive 400-ft. Royal Promenade on the ship. Operational experience showed that the Navigator and subse- quent ships could be lightened up. 24 Maritime Reporter & Engineering News