The first foreign terrorist attack inside the United States was not the aviationbased assault of September II, 2001.

Port security was first formally recognized as a national priority, and a Coast Guard mission, during the World War I era. Early on the morning of July 30.

1916. a tremendous series of explosions ripped through the waterfront at Black Tom Island in Jersey City. New Jersey.

Even though Europe had been at war for almost two years, peace still reigned in the United States. Although officially neutral. U.S. sentiment, both officially and popularly, had shifted heavily against the Axis Powers following the sinking of the RMS Lusitania by a German submarine in May 7. 1915. In a precursor of the Lend-Lease Program of 1940, the Allied Powers were allowed to purchase arms and ammunition in the United States, so long as shipment was performed in vessels of their flags. The Jersey Central Railroad Terminal on Black Tom Island became a focal point for these shipments. Small arms ammunition, detonating fuses, and TNT were regularly shipped from this facility located across from New York City.

Federal oversight was minimal and security was virtually nonexistent.

Passes were not required to gain access to the facility. July 29-30. 1916, was a weekend. The longshoremen had departed, along with the railroad workers and crewmembers. Four security guards were present to patrol the entire terminal and piers, but they were more concerned about avoiding the clouds of mosquitoes. At about 2:45 on Sunday morning, flames were observed coming from one of the hundreds of boxcars loaded with explosives. The security guards immediately fled the facility, stopping only to set off the fire alarm.

The explosions lit up the sky over Jersey City. Shrapnel and debris struck buildings miles away. People were thrown from their beds in northern New Jersey, Manhattan. Staten Island, and Brooklyn.

In homes and buildings in area, including many Manhattan skyscrapers, windows facing the site were blown in and windows opposite the site were blown out. Thousands of terrified people lied to the streets, unaware of the source of the destruction. The shock wave was felt as far away as Philadelphia.

Explosions continued until dawn. In the morning. Black Tom Island, the railroad terminal, the boxcars and locomotives, the piers, and the ships and barges moored there were gone. Miraculously, only four persons were known to have died in the catastrophe, including the master who lived aboard one of the barges. Total damage was estimated to be $40 million. Liberty State Park, across from Ellis Island, now occupies the site of the Black Tom Island explosion.

While German saboteurs were immediately suspected as being the cause of the destruction, it wasn't until 1939 that the German government finally admitted culpability and paid a total of $50 million in damages for both the Black Tom incident and the January 1917 explosion at a Kingsland, New Jersey munitions plant.

Congress, though, did not wait. On June 15, 1917 (less than one year after the Black Tom catastrophe), it enacted the Espionage Act, giving authority to the U.S. Coast Guard to regulate the anchorage and movement of ships in U.S. waters. By this time, the United States had entered World War I on the Allied side. The Coast Guard Commandant, Commodore Ellsworth Bertholf, promptly designated the senior Coast Guard officers in New York, Philadelphia, Norfolk, and Sault Ste.

Marie as Captains of the Port (COTP) to enforce the Espionage Act.

Captain Godfrey L. Carden, commander of the Coast Guard's New York Division, was COTP New York throughout World War I. The majority of the nation's munitions shipments overseas left through New York. For a period of 11/2 years, more than 1,600 vessels, carrying more than 345 million tons of explosives, sailed from this port. In 1918, Carden's unit was the largest single command in the Coast Guard. It was made up of 1,400 officers and men, four Corps of Engineer's tugs and five harbor cutters. His pioneering work defined the Coast Guard's port security mission for the next 60 years.

Port security activities and enforcement of the Espionage Act largely terminated with the end of the war in November, 1918. It resumed, and reached new heights, with the beginning of World War II in 1939. In July, 1941, Congress specifically recognized the position of Captain of the Port as the principal Coast Guard enforcement officer in ports as designated by the Commandant, as well as the adjacent navigable waters of the United States.

On November 1. 1941, the Coast Guard was transferred to the Department of the Navy, with most operational units reporting to the Chief of Naval Operations for military duties.

During World War II. law enforcement missions, though, such as COTP duties.

As in World War I. the Coast Guard supervised the loading and movement of merchant vessels bound for the wartime theaters. It also oversaw many aspects of waterfront security, an activity for which the agency lacked authority during the First World War.

The year 1950 saw initiation of armed conflict in Korea and commencement of the 'Red Scare' in the United States, with Communists alleged to be lurking behind many, if not every, bush. In response to these events. Congress enacted the so-called Magnuson Act, which expanded the Espionage Act of 1917 by making it applicable any time the President finds the security of the United States to be threatened and by expanding its coverage to include not just vessels, but also harbors, ports, and waterfront facilities. President Truman quickly promulgated, by means of an Executive Order, regulations to implement the expanded port security mission of the Coast Guard. Those regulations have been little changed to the present day.

The port security mission could not.

though, adequately address the growing needs of port safety. Congress eventually responded by enacting the Ports and Waterways Safety Act of 1972. This Act provided the Coast Guard with authorities similar to those found in the Espionage Act of 1917, as amended in 1950, but focused on peacetime safety, rather than wartime security. Authority under the 1972 Act was further expanded with passage of the Port and Tanker Safety Act of 1978. When terrorists struck on September 11, 2001, the Coast Guard had broad authority to take action to enhance the port security situation in U.S. waters. It promptly established security zones in almost all major ports and harbors. The agency also established special naval vessel protection zones around all warships in U.S.

waters. Commensurate with the asymmetrical threat posed by terrorists, the Coast Guard utilized its authority under the Ports and Waterways Safety Act to require that advance notices of arrival be submitted earlier than previously and include additional information. Armed Coast Guard personnel, referred to as 'Sea Marshals', were placed on certain high risk vessels entering U.S. ports. All of these actions were taken under statutory authority whose genesis derived from the Black Tom Island incident. The Coast Guard's authority over, and responsibility for, port and maritime security were further expanded with passage of the Maritime Transportation Security Act of 2002 (MTSA). This statute, though, was not written on a blank slate. Rather, it was intentionally designed to build on the framework established by the Espionage Act of 1917 and the Magnuson Act of 1950.

Seen in an historical perspective, the recent Coast Guard activities are another example of that service's prompt response to new challenges 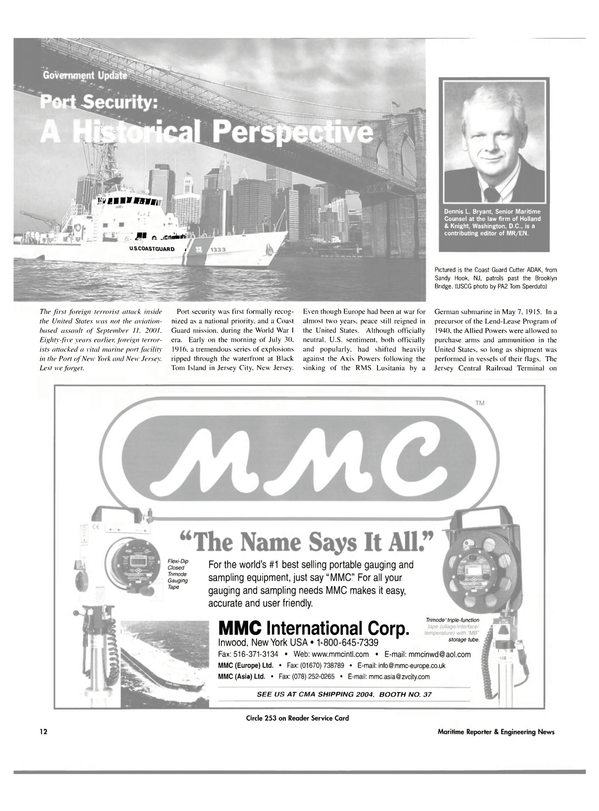