Alfa Laval, a provider of specialized products and solutions based on heat transfer, separation and fluid handling technologies, addresses engineering and environmental requirements in a wide range of areas. The company recently announced a number of new developments and products for use in ballast water treatment, oily waste treatment, and exhaust gas cleaning.

Expanded BWMS Range
As IMO ballast water legislation nears implementation and with the USCG Ballast Water Discharge Standard already in effect, Alfa Laval is expanding its PureBallast range of ballast water management systems with the introduction of new upgrades and a new reactor for system sizes from 170 to 87 cu. m./hr.
The PureBallast 3.1 upgrades are designed to improve system performance and simplify operation through a new human-machine interface while retaining flexibility in installation as well as simple, rapid maintenance procedures. The smaller systems represent a major expansion from the previous minimum flow of 250 cu. m./hr., enabling this purification technology to be implemented in a wide range of smaller vessels.
“Smaller PureBallast systems will be a full match for their larger counterparts, with reactor construction in SMO, effective power management and compact, performance-enhancing CIP,” said Stephen Westerling Greer, Global Business Manager for the PureBallast range.
“When Alfa Laval launched PureBallast commercially in 2006, it was into a market full of uncertainty. Little was clear about the real-world challenges of meeting the IMO Ballast Water Management Convention, to say nothing of when it would take effect.”
During the early development of PureBallast, Alfa Laval aimed to meet the IMO legislation without affecting vessel operations. Having achieved this, the company changed focus to consider the practical requirements of ballast water management systems, including the development of explosion-proof and energy-efficient systems. The latest PureBallast systems are designed to achieve efficient space usage and power management while providing breadth of capacity. Alfa Laval is now moving its focus from vessel requirements to business needs.
“Neither the operations on board nor the vessel’s area of operations should be affected,” said Westerling Greer. “The choice of ballast water treatment system should not be the major constraint on a vessel’s potential business or resale value.”

Performance in any Waters
PureBallast handles water in liquid form at frigid temperatures, and since January of this year has been certified for all water types: fresh, brackish and marine. “Three-water certification is important, and not only for those trafficking the Baltic or the Great Lakes,” Westerling Greer said. “Many ports we think of as brackish are farther from the marine end of the transition zone and closer to fresh water, which means the systems installed should be able to operate with freshwater constraints.”
Even in marine water, PureBallast performs efficiently. Large PureBallast systems of 1000 cu. m./hr. or more, which operate at 52 kW in most port situations, can be ramped up to 100 kW when needed for harbors with low UV transmittance. The UV treatment in all PureBallast systems, which is already enhanced with AOT (advanced oxidation technology), can also be combined with fine filtration for performance in low-clarity and coastal waters. In this way, water with a UV transmittance of just 42% can be treated at full flow.
“The numbers are much more than a mathematical exercise,” Westerling Greer explained. “Some of the world’s key trading ports have water with poor transmittance, where the UV transmittance can be at or even below 50%. Other ports have temperatures that tend towards zero, or are essentially freshwater ports. Because water conditions are variable, a system operating at its limits near these parameters will run into difficulties, whereas PureBallast can treat water in all of these situations, providing it is liquid. The vessel’s operations are not compromised, which is an industry benchmark for other systems to be compared against.”
Alfa Laval has been selected as a consultant on several panels developing standards and providing information on UV disinfection treatments and in March of this year the company submitted a USCG type approval application for PureBallast.
“For a decade, Alfa Laval has been pushing ballast water treatment forward,” said Westerling Greer. “We went through the learning curve early on to develop benchmark systems with a focus on the user’s operational and business needs. Having started as a pioneer, we are now a consultant with a strong role in educating the market.”

PureDry: Oil Recovery and Sludge Minimization
The Alfa Laval PureDry oil recovery system was designed to enable shipowners and operators reuse the HFO fraction of waste oil, but the system also provides major benefits in minimizing sludge. Pauli Kujala, Alfa Laval’s Senior Business Manager responsible for the PureDry and PureBilge purification systems, reports that more than 160 units have been sold since the launch of PureDry in 2013, major purchasers including Carnival Corporation, Dynacom, Frontline, MSC, Norwegian Cruise Line, Petrofac, Spliethoff, Stena and Wallenius. One of the most prominent vessels employing the system is the record-breaking container ship MSC Oscar, while Petrofac’s JSD 6000 deep-sea pipelaying vessel has also had it installed.
PureDry was introduced to provide both a new means of separation and serve a new application, that of waste fuel recovery. However, according to Kujala, waste fuel recovery alone does not explain enough why the system has sold to major companies across all sectors of the shipping industry:
“When we developed PureDry, fuel savings were in focus 100%,” he said. “But customers are just as interested in PureDry now that fuel prices have dropped. Simply put, removing fuel from waste oil has advantages we never envisioned from the start.”

Eliminating Liquid Waste
The PureDry system can recover a significant amount of fuel from waste oil, with recovery levels  as high as 1-2% of a vessel’s fuel consumption being typical, but it also provides an effective means of minimizing sludge. As its name implies, PureDry separates the oil and leaves no liquid residue, allowing ISO 8217 quality fuel to be returned to the bunker tank and the extracted water to be sent to the bilge treatment system. Waste product consists of 5-10 kg per day of non-pumpable ‘super-dry’ solids that are landed and treated as dry waste or incinerated.
“The super-dry solids are the suspended solids that comprise around 1% of the waste oil, and everything else is 100% eliminated,” Kujala said. “In an integrated system with Alfa Laval PureBilge, all of the oily waste streams are dried up. The oil is gone, the water is gone. There’s nothing to pump and virtually nothing to dispose of.”

No Pumping Sludge onto Barges
The advantage of sludge minimization is that it simplifies the waste management process while giving much tighter control over fuel consumption. Dry landed waste is treated in a conventional manner, no additional offloading procedures being required.
“Many vessels today get rid of their waste oil by pumping it onto receiving barges, which is yet another messy procedure for the crew to deal with,” Kujala said. “PureDry eliminates this procedure and all of its drawbacks, which has proven reason enough for some customers to buy it. The super-dry solids go straight out of PureDry and into a container, and the container itself goes straight onto land.”

Saving a Tonne (of fuel)
Kujala points out another benefit of the system: for some customers, sludge reduction into super-dry solids also eliminates the need for sludge incineration, which means the prevention of fuel being wasted.
“To get three tonnes of sludge to burn, you typically have to add one tonne of diesel,” he said. “Environmental considerations aside, the equation makes little sense if you can do things another way. Though sludge can still be incinerated outside of Emission Control Areas, customers would rather get fuel back with PureDry than use even more fuel to get rid of their waste.
“Customers have a range of motives for investing in PureDry, only one of which is recovering waste fuel,” he added. “PureDry was developed for one clear business case, but you can’t always predict how or why a product will be adopted by the market. For some marine customers, the strongest business cases are ones Alfa Laval didn’t see from the beginning.”

RCL Orders PureSox
Alfa Laval has also revealed that its PureSox exhaust gas cleaning systems have been gaining ground in the cruise ship market, with four scrubbers being ordered by Royal Caribbean Cruises Ltd. (RCL) following a lengthy selection and qualification process. Three of these are PureSOx 2.0 systems, the fourth being the first test inline version of PureSOx.
Deliveries will extend over the next few months with the systems installed as retrofits on three of RCl’s Freedom Class ships and on one of the company’s Voyager Class vessels. Freedom of the Seas, Independence of the Seas and Liberty of the Seas will have a hybrid scrubber with multiple inlets, and Adventure of the Seas will have an inline hybrid with one main engine connected.

Reducing Environmental Impact
Cruise industry operators are increasing their commitment to reducing environmental impact and have been using scrubber technology to achieve their objectives, even though its implementation on cruise ships can be more difficult than on other vessels because of space and stability limitations on these vessels. In spite of these issues, the standard U-shaped configuration of PureSOx 2.0 could be successfully incorporated into all three of RCL’s Freedom Class vessels.
“This is a flexible configuration that reduces installation cost by allowing multiple engines to be connected,” said René Diks, Manager Marketing & Sales, Exhaust Gas Cleaning at Alfa Laval. “Space for the scrubber itself was found behind the existing funnel, in front of the rock-climbing wall. The water cleaning unit and circulation tanks, which are necessary for hybrid operation, will be located high up and on the same deck, which will avoid the need for an additional booster pump.”
For the RCL vessels, it was important to employ a hybrid operation system with both closed-loop and open-loop modes. The ships sail U.S. coastal waters and are subject to US VGP discharge legislation, which has stricter standards than those of the IMO.
The PureSOx installation aboard Adventure of the Seas will also be a hybrid system but this had to overcome further challenges because the space available was even less and the stability issues even greater than aboard the Freedom Class vessels. The resulting design means that Adventure of the Seas will be the first vessel to install an inline version of PureSOx, developed at the Alfa Laval Test & Training Centre in Aalborg, Denmark.
“The cruise industry, with its environmental profile and unique technical considerations, places high demands on a SOx scrubber,” Diks says. “Alfa Laval PureSOx provides a great deal of flexibility in meeting those demands, and will offer even more flexibility when the inline version is officially launched.”


The Author
Tom Mulligan is a freelance science and technology writer based in Redhill, Surrey, United Kingdom


(As published in the May 2015 edition of Maritime Reporter & Engineering News - http://magazines.marinelink.com/Magazines/MaritimeReporter) 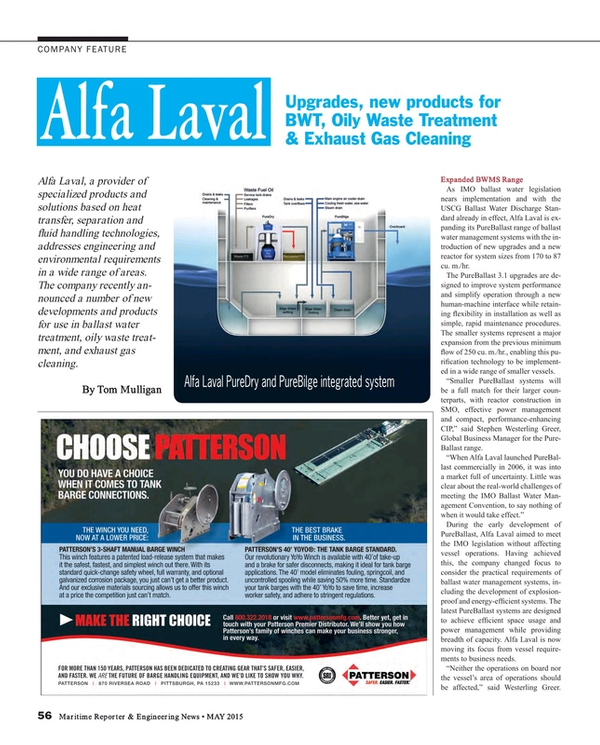 Read What's New at Alfa Laval? in Pdf, Flash or Html5 edition of May 2015 Maritime Reporter

Other stories from May 2015 issue