KVH Is On 'Watch'

Conceived in its never-ending drive to progressively service its customers, KVH is working on a proprietary Internet of Things (IoT) solution for the commercial maritime market. Code-named “Watch,” KVH’s IoT application is designed to collect, compress, process, transport and analyze system data from ships, with the promise to deliver a broad swath of customizable efficiency solutions. Robert Balog, SVP, Engineering and Michael Mitsock, VP of Marketing discuss the plan with Maritime Reporter & Engineering News.

While the maritime industry is generally classified conservative in terms of technology uptake, the tide is changing as some of the world’s biggest ship owners aggressively leverage data available from ship operations, covering everything from machinery and system health to navigation, in an effort to save money and increase efficiency. On the equipment side, the days of performing service premised on the calendar is giving way to ‘condition based maintenance’ (CBM). On the navigation side, solutions are increasingly becoming prescriptive, analyzing previous performance given route, weather, course and speed.
Information Overload
A large modern commercial ships can have up to 6,000 points of monitoring and generate in excess of 60MB of data per day. In step with land-based trends, those numbers are projected to continue rising. As the number of users and the flow of data from ship to shore increases, naturally the cost of transmission will come down too. But problematic still will be the sheer quantity of data, or more accurately stuffing all of that data efficiently and cost-effectively through existing satellite communication pipelines. “That is a discussion shaping around IoT in every industry: how do you take a mass of data and shrink it down to something that is usable?” said Mitsock. For the commercial maritime sector, KVH is developing a solution, code named “Watch,” which is scheduled to come to market in 2017.
Problem Solving
KVH is a ubiquitous presence in the maritime VSAT sector, last year recording milestones in shipping its 6,000th TracPhone system for the mini-VSAT Broadband service, and its 200,000th mobile satellite antenna shipped for its TracPhone and TracVision product lines. The company is uniquely positioned in regards to IOT solutions as it manufactures, installs and services the antenna systems and ancillary equipment, as well as provides the VSAT pipeline. The development of its “Watch” IoT solution is an outgrowth of KVH’s customer service mantra of always providing a ‘Positive Customer Experience,’ said Mitsock. But KVH ran into a problem as it continued to grow its business, specifically, data flow and bandwidth, as the KVH antenna alone generates about 10MB of data per day.  “The bandwidth is the issue, as we had to find the means to maximize that connection,” said Balog. “Even though we have a much faster connection, we have to always think: ‘what are we going to do with all of this data?’”
The solution is simple to state, complex to deliver: move more data processing to the ship, and be more selective in determining the information to be sent. According to Balog, a key is edge processing
Today the routine is to move data from ship to shore, then run the data through a parser to get a summary of the antenna’s operation. Step one of the KVH solution is to move the data parser to the ship, and simultaneously use a software solution to effectively reduce the file transmit size from 10MB to about 800 bytes. To optimize the process even further, the shipboard system is able to monitor network data load, transmitting data at optimum times.
Balog said once KVH solved its own problem, it became clear that by making its solution flexible that this solution could include data flows from other ship equipment and systems. The key to success, however, comes in working with individual vessel owner / operators to determine data priorities for each owner, each ship, each fleet. “The need came out of developing something for ourselves, and we thought, ‘let’s make it flexible,’” and look to integrate data streaming from other shipboard equipment and systems. With a broad global footprint KVH had a broad field to find a willing technology partner to help develop the system. While full details on the exact nature of the commercial ship(s) under test could not be shared, KVH did concede that “there is a beta test in progress, a beta test capturing all shipboard data from dozens of sensors on a brand new, modernized, sensor-laden commercial vessel.”
Data Screening
According to Balog, selecting the data that you don’t want is equally important to selecting the data you do want, effectively edge processing the big data in a means to receive only a summary of the data you need. Increasingly sensor vendors, of example, are putting additional analytics (Sensor Based Analytics) in the sensors themselves to help crunch the data, minimizing the amount needed for transportation. Mitsock put it in practical terms: “If a pump is operating normally, do you need notification every 10 minutes that the pump is working correctly? Probably not. The pump only ‘raises its hand’ if something is going south, as opposed to reporting every 10th of a second that everything is just fine.” On the other hand, if a main engine is having a performance problem, that information could be critical to ship and crew safety, as well as savings on both maintenance and fuel, for example. The customization and prioritization of the data, ultimately, is up to the vessel owner/operator to decide.
With the ability to more easily crunch, prioritize and send data, one of the chief challenges remains sorting through all of the systems and sensors to ascertain the desired information, and ultimately getting all of the sensors and systems – digital and analog – connected and speaking the same language.
Cutting through the complexity of shipboard technology collection, processing and transmission, the premise of KVH “Watch” is simple: to provide a proactive and preemptive tool for preventing failures at sea, benefitting fleet operators with operational efficiency and cost savings.
(As published in the February 2017 edition of Maritime Reporter & Engineering News) 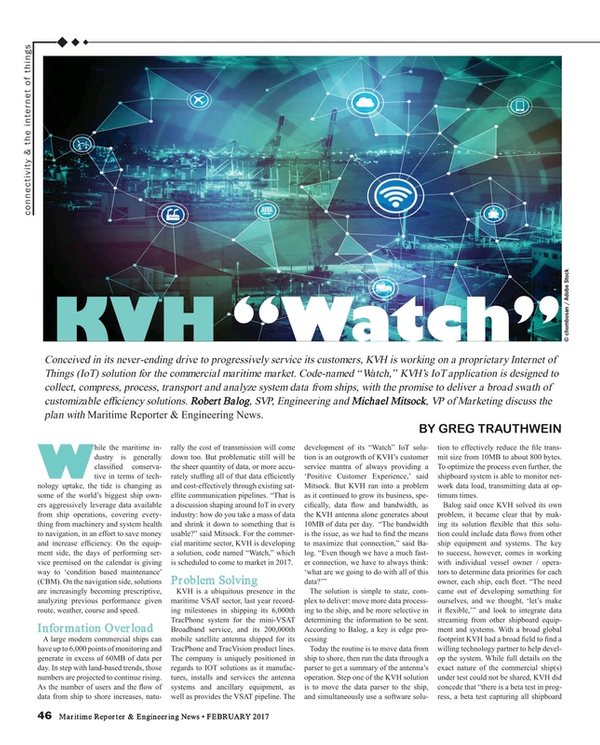 Read KVH Is On 'Watch' in Pdf, Flash or Html5 edition of February 2017 Maritime Reporter