Stony corals are marine invertebrates with somewhat unique life cycles. For the most part, they reproduce sexually, broadcasting gametes into the water. Often, an entire coral colony or reef will spawn on the same night. Coral may also reproduce asexually by producing genetically identical polyps. Fertilized gametes drift in the current until, hopefully, they alight on a hard surface like a rock suitable for attachment. The gamete then develops into a polyp, producing a basal plate that affixes itself to the hard surface. Tentacles develop around the mouth, while the exterior of the polyp produces a skeleton of calcium carbonate called a calyx. Coral tend to reside in large colonies that develop into reefs over time.

Coral fossils date as far back as the Cambrian period, more than 500 million years ago. Most coral fossils are of species that have since gone extinct, and there were long periods for which no coral fossils have been identified.
Many corals develop a symbiotic relationship with algae. The algae provide oxygen and energy to the coral and aid the polyp in calcification through secretion of calcium carbonate. The coral protects the algae from other predators, while providing it with carbon dioxide and waste containing vital nitrogen. The coral’s primary source of nutrition, though, is obtained by the tentacles capturing plankton from the surrounding water.
The calcification rate of coral is heavily dependent upon environmental factors, particularly exposure to sunlight.
The symbiotic algae seem to secrete more calcium carbonate in sunlight than at night, in cloudy weather, or when the water is turbid.
Stony corals may be classified into ten general forms. Branching corals have branches and secondary branches. Digitate corals resemble fingers, with no secondary branches. Table corals are table-like structures with fused branches. Elkhorn corals have large, flattened branches. Foliose corals have broad plate-like portions rising above the substrate. Encrusting corals form a thin layer above the substrate. Submassive corals have knobs, columns, or wedges protruding from an encrusting base. Massive corals are ball-shaped. Mushroom corals resemble the tops of mushrooms. Cup corals resemble egg cups.
Coral reefs are found mostly in warm, shallow water, but also form to a lesser extent in deeper water and in colder water. Each coral colony tends to consist of a single species or, sometimes, several closely related species, basically a mono-culture. The reefs themselves though are complex biomes, home to a wide variety of plants and animals. Seaweed, sea grasses, plankton, and algae thrive on coral reefs, providing food for numerous fish, crustaceans, and other animals, many of which take shelter within the crevasses of the reef. The smaller animals attract larger predators, increasing the diversity of life along the reef.
As older coral dies, new coral grows on top of the calyx left behind. Thus, reefs tend to grow slowly upward. Given sufficient time, coral reefs can become quite thick.
The largest extant coral reef is the Great Barrier Reef off the east coast of Australia. The Indo-Pacific region is home to over 500 reef-building species, while the Atlantic region contains 62 known species. Fossil evidence indicates that the Atlantic region, particularly the Caribbean, have greater coral diversity until the closure of the natural seaway connecting the Atlantic and Pacific through what is now Central America. The barrier reef off Belize is quite extensive.
Coral reefs are broadly categorized as having one of three structures. Fringing reefs are the most common, projecting seaward from the shore and forming borders along the shoreline and nearby islands. Barrier reefs are roughly parallel with the shore, but with a lagoon (sometimes deep) between the reef and the shore.
Atoll reefs start out as fringing reefs around volcanic islands. In this case though, the island gradually submerges, leaving a large lagoon surrounded by the coral reef, sometimes with breaks in the reef allowing connections between the ocean and the lagoon. Many of the Marshall Islands in the Central Pacific are built on the tops of old atoll reefs and enclose large lagoons. Kwajalein Atoll encloses one of the largest atoll lagoons in the world.
Coral reefs protect the shore and lagoon by absorbing the full force of the waves and dissipating that energy. The shore is thus protected from erosion and the lagoon can develop an ecosystem quite different from that outside the reef.
Corals and coral reefs worldwide are currently facing a variety of threats. In some locations, there is a commercial coral mining industry. Nutrient runoff from agricultural and urban areas is altering the habitat. Overfishing has reduced the diversity that the reefs require to grow. Bottom trawling through coral reefs often tears up and destroys the coral. Industrial activity, such as dredging, has destroyed large portions of some reefs and created increased sediment that smothers and kills the coral.
More broadly, the increased ocean temperatures have stressed many reefs. Acidification has leached the calcium carbonate out of the calyx of many corals. Sea level rise threatens to put some of the deeper reefs below the level where they can receive the requisite amount of sunlight. Coral bleaching is a growing problem, with many corals losing them characteristic colors and turning white or gray.
Various measures have been taken to protect coral reefs. The Great Barrier Reef and the Florida Keys are among the coral reefs worldwide that have been designated by the IMO as particularly sensitive sea areas (PSSAs). The United States prohibits lightering of petroleum cargoes in waters above the Flower Garden Banks coral reefs in the Gulf of Mexico.
A coral reef, though, is a more complex ecosystem than a particular species of animal. Thus, a systemic approach is necessary to provide meaningful protection. Several nations, including Australia, Kiribati, the United Kingdom, and the United States, have designated large-scale marine sanctuaries or marine protected areas that include significant coral reefs. While the degree of protection afforded coral reef ecosystems in each of these sanctuaries or areas varies, these measures are steps in the right direction to protect this unique natural resource.
The Author
Dennis L. Bryant is with Bryant’s Maritime Consulting, and a regular contributor to Maritime Reporter & Engineering News as well as online at MaritimeProfessional.com.
t: 1 352 692 5493
e: dennis.l.bryant@gmail.com
(As published in the February 2017 edition of Maritime Reporter & Engineering News) 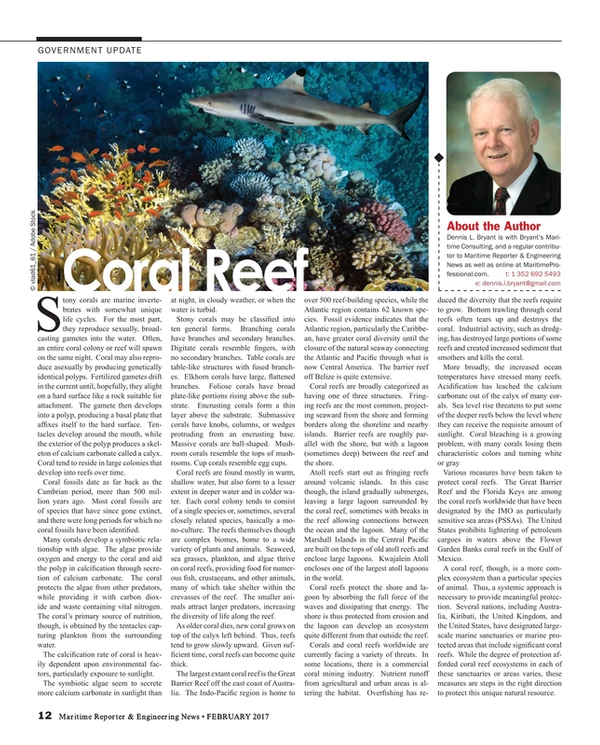