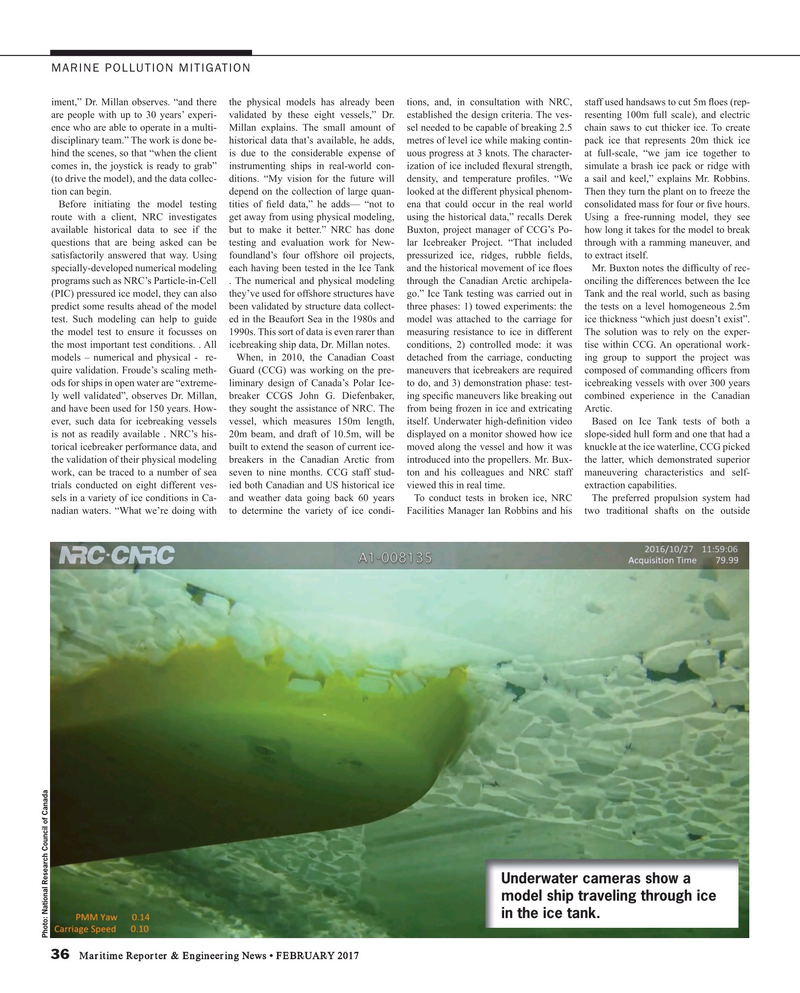 MARINE POLLUTION MITIGATION iment,” Dr. Millan observes. “and there the physical models has already been tions, and, in consultation with NRC, staff used handsaws to cut 5m ? oes (rep- are people with up to 30 years’ experi- validated by these eight vessels,” Dr. established the design criteria. The ves- resenting 100m full scale), and electric ence who are able to operate in a multi- Millan explains. The small amount of sel needed to be capable of breaking 2.5 chain saws to cut thicker ice. To create disciplinary team.” The work is done be- historical data that’s available, he adds, metres of level ice while making contin- pack ice that represents 20m thick ice hind the scenes, so that “when the client is due to the considerable expense of uous progress at 3 knots. The character- at full-scale, “we jam ice together to comes in, the joystick is ready to grab” instrumenting ships in real-world con- ization of ice included ? exural strength, simulate a brash ice pack or ridge with (to drive the model), and the data collec- ditions. “My vision for the future will density, and temperature pro? les. “We a sail and keel,” explains Mr. Robbins. tion can begin. depend on the collection of large quan- looked at the different physical phenom- Then they turn the plant on to freeze the

Before initiating the model testing tities of ? eld data,” he adds— “not to ena that could occur in the real world consolidated mass for four or ? ve hours. route with a client, NRC investigates get away from using physical modeling, using the historical data,” recalls Derek Using a free-running model, they see available historical data to see if the but to make it better.” NRC has done Buxton, project manager of CCG’s Po- how long it takes for the model to break questions that are being asked can be testing and evaluation work for New- lar Icebreaker Project. “That included through with a ramming maneuver, and satisfactorily answered that way. Using foundland’s four offshore oil projects, pressurized ice, ridges, rubble ? elds, to extract itself.

specially-developed numerical modeling each having been tested in the Ice Tank and the historical movement of ice ? oes Mr. Buxton notes the dif? culty of rec- programs such as NRC’s Particle-in-Cell . The numerical and physical modeling through the Canadian Arctic archipela- onciling the differences between the Ice (PIC) pressured ice model, they can also they’ve used for offshore structures have go.” Ice Tank testing was carried out in Tank and the real world, such as basing predict some results ahead of the model been validated by structure data collect- three phases: 1) towed experiments: the the tests on a level homogeneous 2.5m test. Such modeling can help to guide ed in the Beaufort Sea in the 1980s and model was attached to the carriage for ice thickness “which just doesn’t exist”. the model test to ensure it focusses on 1990s. This sort of data is even rarer than measuring resistance to ice in different The solution was to rely on the exper- the most important test conditions. . All icebreaking ship data, Dr. Millan notes. conditions, 2) controlled mode: it was tise within CCG. An operational work- models – numerical and physical - re- When, in 2010, the Canadian Coast detached from the carriage, conducting ing group to support the project was quire validation. Froude’s scaling meth- Guard (CCG) was working on the pre- maneuvers that icebreakers are required composed of commanding of? cers from ods for ships in open water are “extreme- liminary design of Canada’s Polar Ice- to do, and 3) demonstration phase: test- icebreaking vessels with over 300 years ly well validated”, observes Dr. Millan, breaker CCGS John G. Diefenbaker, ing speci? c maneuvers like breaking out combined experience in the Canadian and have been used for 150 years. How- they sought the assistance of NRC. The from being frozen in ice and extricating Arctic. ever, such data for icebreaking vessels vessel, which measures 150m length, itself. Underwater high-de? nition video Based on Ice Tank tests of both a is not as readily available . NRC’s his- 20m beam, and draft of 10.5m, will be displayed on a monitor showed how ice slope-sided hull form and one that had a torical icebreaker performance data, and built to extend the season of current ice- moved along the vessel and how it was knuckle at the ice waterline, CCG picked the validation of their physical modeling breakers in the Canadian Arctic from introduced into the propellers. Mr. Bux- the latter, which demonstrated superior work, can be traced to a number of sea seven to nine months. CCG staff stud- ton and his colleagues and NRC staff maneuvering characteristics and self- trials conducted on eight different ves- ied both Canadian and US historical ice viewed this in real time. extraction capabilities. sels in a variety of ice conditions in Ca- and weather data going back 60 years To conduct tests in broken ice, NRC The preferred propulsion system had nadian waters. “What we’re doing with to determine the variety of ice condi- Facilities Manager Ian Robbins and his two traditional shafts on the outside

Underwater cameras show a model ship traveling through ice in the ice tank.