Practical Contributions to the Development of Autonomous Sailing

A great deal of debate and speculation surrounds autonomous sailing. While MARIN does not pretend to know all the answers, it is taking practical steps to assist in its development.

The introduction of further autonomy in shipping first aims to facilitate much higher safety standards, but at the same time, a reduction in manning. MARIN is focusing on three main areas in relation to autonomous sailing. We believe it is important to study the ship in relation to traffic control, to understand nautical safety issues and the definition of new manning roles, including those onshore.

Additionally, in an effort to further research into autonomous sailing, MARIN, together with the Dutch maritime industry, has already started a new Joint Industry Project. Within ‘Autonomous Sailing’ we will look together into the available technology required. Here we outline the various roles control and vessel modelling play in the development of autonomous sailing.

Control
Without heading, position and track control, sea keeping and maneuvering model tests would not be possible. Conclusions and predictions about the performance of the whole system inevitably include the performance of the controlled system. The best control possible is therefore essential for MARIN. The performance of the control system should not be dominating the outcome of simulations and model tests unless it was supposed to. A control system is used to keep a vessel in position, or on track in varying conditions, and should make optimal use of all its available resources, such as the installed generator power, thruster characteristics and others. If this is not done correctly it will result in a vessel design with a (much) lower operational capability than predicted.

There is a parallel hierarchy between autonomy and control. Control is an inevitable basis for the higher levels of autonomy: no control, no autonomy. The lowest level of autonomy corresponds to manual control by a human operator. A system complying with the highest autonomy level will make its own plan, take its own decisions and execute it using its control systems.

When performing docking simulations to study the safety of harbour approaches, the simulation model needs to include a decision algorithm that realistically allocates and controls the harbour tugs that assist the vessel as it enters the harbour and docks along the quayside. Similar challenges apply when simulating marine traffic when evaluating traffic separation scheme designs. These should incorporate some sort of ‘operator in the loop’ model to be able to include the long-term mission planning and to avoid high-risk collision situations.

Models
MARIN’s time simulation models will be used to predict dangerous situations well in advance. This gives the operator – either onboard or onshore - the opportunity to assess the situation in plenty of time and it provides him with alternative solutions. The better these simulation models reflect the actual behavior of the ships and the better they incorporate actual environmental conditions, the better the operator will be able to identify risky situations and select the lowest risk scenario for execution.

Nautical Safety Issues
In addition to adequate modeling of the maneuvering and route/track prediction capabilities, the ‘detect and avoid’ algorithms also require knowledge about traffic conflict solutions. The latter will have to cope with multiple vessel and other complex scenarios. The conflict solutions of these scenarios will need to take into account various perspectives. They have to obey the Collision Regulations (COLREGS), local regulations and the pure physical limitations imposed by the environment on the vessels’ capabilities.

In addition good seamanship and predictability are other very important factors. These reflect the many ‘unwritten rules’ about traffic situations that are often only confirmed by direct contact through the VHF. The unwritten rules refer for instance to the distances kept during close range encounters and/or the more strategic, long-term ‘well clear’ behavior. Both traffic (conflict) solutions have their own safety and economy driven parameters.

New Manning Roles
Each level of autonomy will introduce its own challenges concerning the interfacing with the nautical data representations like route planning, weather assessment and the ship’s condition. Both the onboard and on-shore parts of these representations will require new equipment capabilities and new operator competences. Again, the detect and avoid models are used to produce the appropriate, and safety critical situational awareness representations, pointing (well in) time and space to the emerging and potentially conflicting or even violating traffic situations.

Complete removal of the ship’s crew will require full autonomy for all onboard functions, including maintenance and repair. It will require simpler systems and the redundancy of critical systems. The “All-Electric Ship” will be a very appealing design solution for autonomous ships. In addition, an all-electric ship has the benefit of reducing emissions drastically provided renewable energy is used to charge its batteries. Here we have outlined some of the first practical steps that are being taken. As mentioned, the Autonomous Sailing Joint Industry Project is already underway. Furthermore, a model test programme will investigate the present status/capabilities of our autonomous evade maneuvering algorithms (‘crossing’ and ‘passing’). 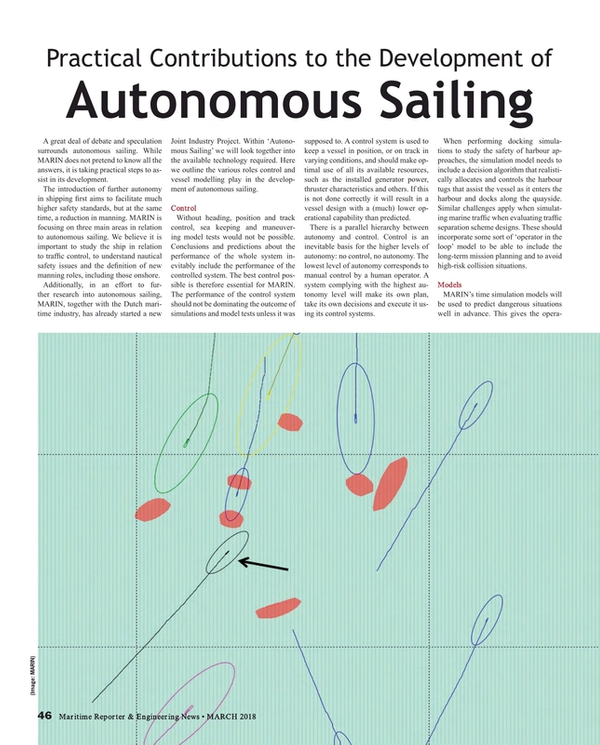 Read Practical Contributions to the Development of Autonomous Sailing in Pdf, Flash or Html5 edition of March 2018 Maritime Reporter