Making the Case for LPG as a Marine Fuel

The sulfur emission control areas (SECAs) in place in North-America and Northern Europe, in combination with the upcoming global 0.5% limit on sulfur in 2020 (or 2025) and similar EU limits in 2020, call for alternative fuels as a means for compliance. Several alternative fuels are available and, at the same time, new fuel oil products with very low sulfur content have been introduced.

In this respect, the ability of the new MAN ME-LGIP engine to run on LPG, which is a sulfur-free fuel, offers great potential for compliant ship operation within SECA zones.

The use of LPG as the fuel in MAN B&W two-stroke engines will reduce the C02 emission by up to 13%, when compared to MDO and up to 18% when compared to HFO. As an additional feature, the LPG engine has great potential for being a solution to handle the volatile organic compound (VOC) issue in shuttle tankers and other crude oil carriers as the engine holds novel options for burning the liquid volatile organic compound (LVOC) of the VOC. The engine can burn any mixtures of propane and butane, and furthermore, the mixture can contain significant amounts of ethane. All heavier hydrocarbons normally contained in the LVOC can also be used.

Both gas carriers and container ships would be potential customers for the multi-gas engine. René Sejer Laursen, promotion manager, dual-fuel engines, MAN Energy Solutions noted that gas carriers are already installing tanks capable of holding LPG, LNG and ethane (although not mixed together), and an engine that could burn all these fuels would be a considerable advantage.

“The potential for containerships to use the fuel is also considerable”, Laursen said. He argued that operators had shied away from LNG because it often ties them to one supplier. The ability to use several fuels would give them a competitive advantage by allowing them to select the cheapest fuel at a given port, as well as ensuring compatible fuels are available at a wider selection of ports.

The Introductory Event
Against this background MAN Energy Solutions has revealed its latest two-stroke engine type, a dual-fuel MAN B&W ME-LGIP engine designed for LPG running, at a ceremony in Copenhagen on 3rd of September attended by its Chief Sales Officer, Wayne Jones, along with a large crowd of customers and business partners. The event was hosted by MAN Energy Solutions’ Thomas Knudsen, Head of the Two-Stroke business unit, and Bjarne Foldager, Vice President Sales & Promotion – Two-Stroke business unit.

Foldager said: “Interest in using LPG as a fuel, within and outside of the LPG carrier segment, is growing due to its sulfur-free character, widespread availability and ease of bunkering. In gas mode, the ME-LGIP engine operates on just 3% pilot oil and down to 10% load. Ultimately, we expect the engine to operate without the need for pilot oil.”
MAN Energy Solutions expects a strong demand for the ME-LGIP engine from very large gas carriers (VLGCs) and coastal vessels from its introduction.

The diesel principle provides the ME-LGIP engine with high operational stability and efficiency, including during load changes and fuel change-over, while defining properties such as a stable change-over from one fuel type to another with no fuel-penalties are maintained. The negligible gas slip of the ME-LGIP engine makes it the most environmentally friendly, two-stroke technology available.
MAN ES also reports that the ME-LGIP engine has experienced an up to 18% reduction in CO2 and circa 90% reduction in particulate matter when running on LPG, compared with HFO.

One Engine Fits All
As has been explained during the introductory event in Copenhagen the MAN B&W ME-LGIP is the only liquid gas injection dual-fuel engine on the market, allowing to switch between conventional HFO, MGO and LPG fuels with no loss to performance. Not only does this help to maximize ROI, but with zero sulfur in LPG and 13% less CO2 from LPG fuel, ship owner stay comfortably within emissions limits.
The compact liquid gas injection system means the MAN B&W ME-LGIP could also be an ideal retrofit solution for existing fleets. The technology can be applied to all types of ships with an ME-C engine of bore size equal to or bigger than 500 mm. LPG gas carries are likely retrofit candidates.
Furthermore, the ME-LGIP engine is flexible with regard to LPG composition and finds even LPG qualities containing significant amounts of ethane acceptable.

The ME-LGI (-Liquid Gas Injection) concept can be applied to all MAN Energy Solutions low-speed engines from 500-bore and up, either ordered as an original unit or through retrofitting.

The primary characteristics of ME-LGIP engines include:
The engine works according to the two-stroke cycle and comes with numbers of cylinders from 5 to 12 depending on bore size (bore: 500 mm to 950 mm); whereby the stroke/bore ratio is: 3.6 to 5.0.
With this the specified maximum continuous power range is of 5,350 kW to 82,440 kW.
The engine features:
* a low-pressure supply system;
• a fuel-injection system similar to that most recently developed for MAN ES conventional MDO/HFO engines – the FBIV (Fuel Booster Injection Valve): this innovative fuel booster, specially developed for the ME-LGI engine, ensures that a low-pressure fuel-gas supply system can be employed, significantly reducing first-time costs and increasing reliability,
• an injection pressure of 500-600 bar
• the ability to handle low-sulfur/low-flashpoint fuel types: methane, methanol, ethanol, LPG, and dimethylether (DME).
• Turbocharging system
• High efficiency constant pressure turbocharging systems with MAN, ABB or MHI turbochargers as standard
• Engine automation and control
• In-house developed gas safety and control system
• Fuel oil system
• Common injection system for pilot oil and for main injection
• Gas system
• LPG injection by fuel booster injection valves (FBIV)

According to MAN ES it comes without saying that the new MAN B&W ME-LGIP engine fulfills the following exhaust regulations:
* IMO Tier II and also IMO Tier III (with SCR, EGR or EcoEGR*). ( *): for improved efficiency when operating in Tier II mode.)

Summary
The ME-LGI came about due to interest from the shipping world in operating on alternatives to HFO. Methane, Methanol and LPG carriers have already operated at sea for many years and many more LPG tankers are currently being built as the global LPG infrastructure grows. With a viable, convenient and comparatively cheap fuel already onboard, it makes sense to use a fraction of the cargo to power the vessel with an important, side-benefit being its positive, environmental performance.
* The ME-LGIP engine operates with the same efficiency as the ME-C engine
* The ME-LGIP engine will consume LPG as main fuel and uses HFO as pilot oil
* Seamless change over from gas to fuel and vice versa
* Possible to run on any gas/fuel mix, fuel flexibility 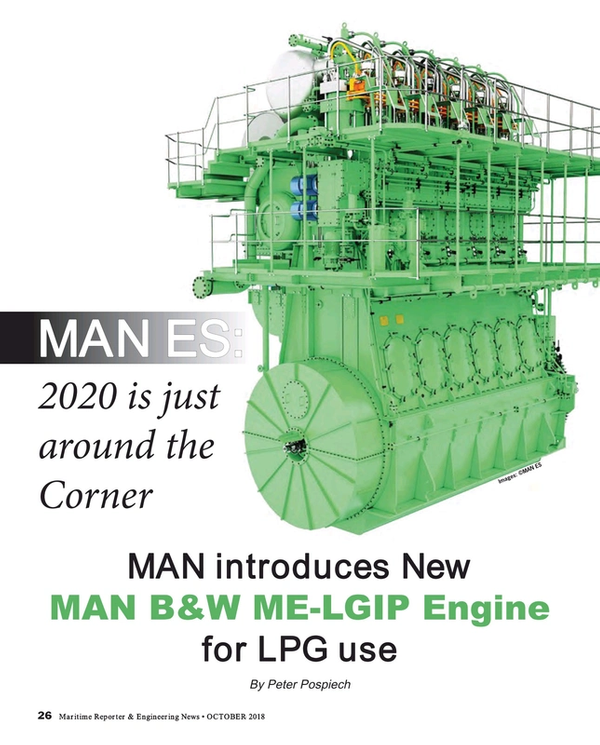 Read Making the Case for LPG as a Marine Fuel in Pdf, Flash or Html5 edition of October 2018 Maritime Reporter