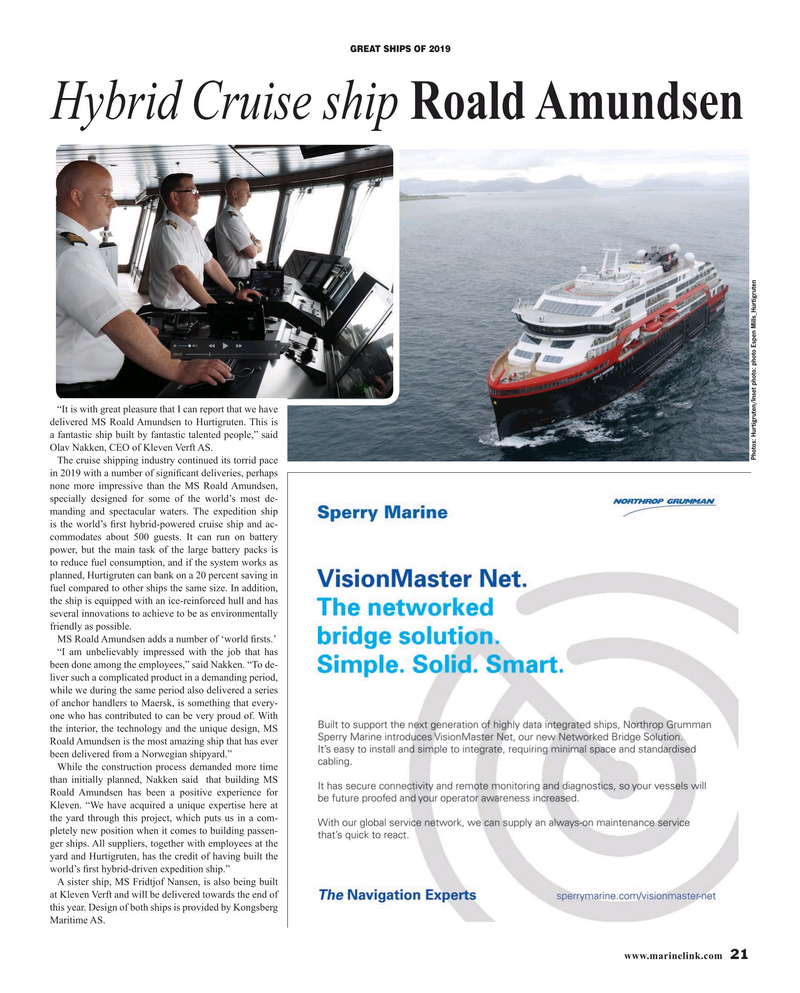 Hybrid Cruise ship Roald Amundsen “It is with great pleasure that I can report that we have delivered MS Roald Amundsen to Hurtigruten. This is a fantastic ship built by fantastic talented people,” said

The cruise shipping industry continued its torrid pace in 2019 with a number of signi? cant deliveries, perhaps none more impressive than the MS Roald Amundsen, specially designed for some of the world’s most de- manding and spectacular waters. The expedition ship is the world’s ? rst hybrid-powered cruise ship and ac- commodates about 500 guests. It can run on battery power, but the main task of the large battery packs is to reduce fuel consumption, and if the system works as planned, Hurtigruten can bank on a 20 percent saving in fuel compared to other ships the same size. In addition, the ship is equipped with an ice-reinforced hull and has several innovations to achieve to be as environmentally friendly as possible.

MS Roald Amundsen adds a number of ‘world ? rsts.’ “I am unbelievably impressed with the job that has been done among the employees,” said Nakken. “To de- liver such a complicated product in a demanding period, while we during the same period also delivered a series of anchor handlers to Maersk, is something that every- one who has contributed to can be very proud of. With the interior, the technology and the unique design, MS

Roald Amundsen is the most amazing ship that has ever been delivered from a Norwegian shipyard.”

Roald Amundsen has been a positive experience for

Kleven. “We have acquired a unique expertise here at the yard through this project, which puts us in a com- pletely new position when it comes to building passen- ger ships. All suppliers, together with employees at the yard and Hurtigruten, has the credit of having built the world’s ? rst hybrid-driven expedition ship.”

A sister ship, MS Fridtjof Nansen, is also being built at Kleven Verft and will be delivered towards the end of this year. Design of both ships is provided by Kongsberg